While addressing the First in the South Dinner on Monday, Democrat White House hopeful Joe Biden cemented his position as a gaffe machine when he told attendees he is a candidate for the U.S. Senate.  He compounded that by saying voters can choose the “other” Biden if they want.

“My name is Joe Biden. I’m a Democratic candidate for the United States Senate. Look me over, if you like what you see, help out. If not, vote for the other Biden,” he said, according to a video that has gone viral on Twitter.

Joe Biden: "My name is Joe Biden. I'm a Democratic candidate for the United States Senate…if you don't like me, you can vote for the other Biden."

The pair of confusing statements comes as Democrat primary candidates will debate Tuesday evening in Charleston. The Palmetto State will head to the polls for its primary contest on Saturday, where Biden hopes to use his “firewall” to blunt Sen. Bernie Sanders’s (I-VT) momentum after winning the Nevada caucuses. Earlier this month, the Vermont senator won the New Hampshire primary and took the popular vote in Iowa. A Public Policy Polling survey released Monday shows Biden with 36 percent of support, while Sanders is trailing in second at 21 percent.

Biden is no stranger to making confusing statements on the campaign trail. Biden referred to New Hampshire as Nevada on the night of the Granite State’s primary. The incident was one of several in which he has appeared confused about the city or state that’s he’s campaigning in.

Biden is well known for making gaffes on the campaign trail, and this election season is no different.  However, it’s beginning to appear that Biden’s gaffes may not be the result of stage fright or “nerves.”

Could this be the reason his so-called “firewall” appears to be crumbling in the Palmetto State?  According to a recent NBC News/Marist poll, he’s ahead of Bernie Sanders by only four points: 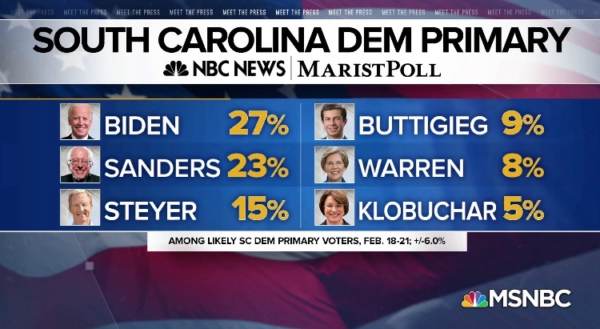 Yet Biden claims he’s going to “beat President Trump like a drum.”  Something tells us that isn’t going to happen…