It seems that “Sleepy” Joe Biden had a terrible day when he spoke to voters in Toledo, Ohio.  For starters, he forgot Mitt Romney’s name.  Then he told voters he was running for the U.S. Senate.  And to top all that off, he directed them to a website that doesn’t even exist.

“I got in trouble when we were running against that senator who was a Mormon, the governor,” he said while on the tarmac preparing to leave for Toledo.

JUST IN: Joe Biden on #AmyConeyBarrett: "Her faith should not be considered… You may remember I got in trouble when we were running against the senator who was a Mormon, the governor." pic.twitter.com/tjHOxxlGUr

Once in Toledo, he told voters: “I’m running as a proud Democrat for the Senate.”

"I'm running as a proud Democrat for the Senate" pic.twitter.com/OcmWDSAfe0

It’s not the first time he’s gotten confused about what office he’s running for, as we noted here.

This, by the way, happened even as Trump supporters were heckling him, drowning out his speech with car horns and chants of “four more years.”

He encouraged people to register to vote, directing them to a website that doesn’t even exist:

At the time of this writing, the website he mentioned gives you this: 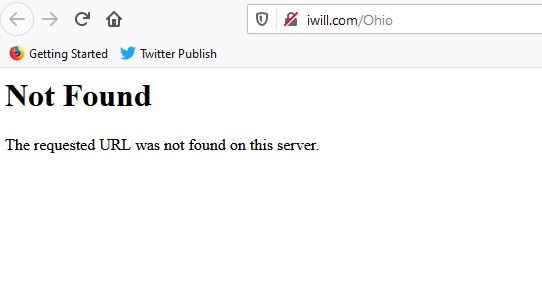 Speaking in Sanford, Florida, President Trump had a bit of fun at Biden’s expense, telling the crowd if he had a day like the former vice president’s, everyone would say, “it’s over.”

'SLEEPY JOE': "If I ever had a day like he had today – they'd say it's over."@realDonaldTrump slams Biden, "he's got a lot of bad days coming." pic.twitter.com/htGRNMJTdu

Questions about Biden’s mental fitness for office have been raised for quite some time now.  One cannot help but wonder: Is this the REAL reason Democrats like Nancy Pelosi are exploring the 25th Amendment?

Twitchy noted: “Maybe Joe’s campaign should have called another lid today instead of campaigning.”

Perhaps they’re onto something.

EXCLUSIVE: The Democrats’ Attorney Marc Elias Has His Army of Radical...

BLM Activists Threaten To Dox Officers And Kill Their Families — Is THAT A Terrorist Threat?
April 13th, 2021 Clash Daily