The Salt Lake Tribune reported that one graduate school teacher took it upon herself to violate not only the Constitution, but Utah law and school policy by demanding in her syllabus that anyone with a weapon had to stand – that’s STAND – in a 3×3 square in the back of her classroom. It’s legal to carry firearms into a classroom in Utah, as long as the owner has a CCW permit. That stupidity didn’t last long. 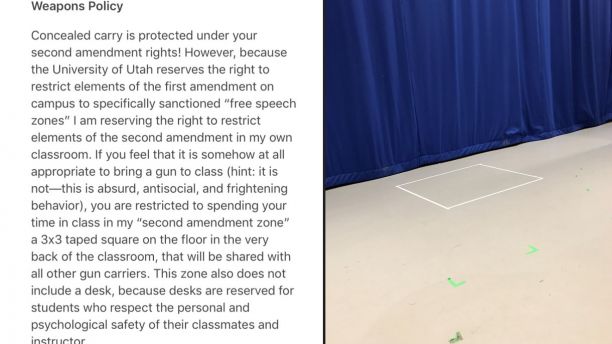 A Utah State Rep, Karianne Lisonbee, contacted the school and lodged a complaint. She said two other students also complained about the incident, and were worried about their grades.They took a picture of the syllabus, which Lisonbee posted on her Facebook page.

“I am livid. A University of Utah Professor doesn’t understand the Bill of Rights and University policy on free speech – which is disturbing enough. But even more egregious, she is seeking to break state law and deprive students of their rights.”  Utah State Rep. Karianne Lisonbee

She encouraged students to never be afraid to speak out.

“Concealed carry is protected under your second amendment rights! However, because the University of Utah reserves the right to restrict elements of the first amendment on campus it specifically sanctioned “free speech zones” I am reserving the right to restrict elements of the second amendment in my own classroom. If you feel that it is somehow at all appropriate to bring a gun to class (hint: it is not — this is absurd, antisocial, and frightening behavior), you are restricted to spending your time in class in my “second amendment zone” a 3×3 taped square on the floor in the very back of the classroom, that will be shared by all other gun carriers. This zone does not include a desk, because desks are reserved for students who respect the personal and psychological safety of their classmates and instructor.”

The graduate assistantwill not be teaching this semester. And she is wrong about the “free speech zone” – the University scrapped free speech zones in 2017 after passage of a law prohibiting them.

“The statement has been removed from the syllabus and students in the class have been alerted to the error. The graduate student instructor has apologized and has received additional training about the university’s policies. The student instructor will not teach this semester and will instead have other assignments.” University of Utah spokesman, Chris Nelson

The University responded appropriately.  But in fact, the person shouldn’t teach any student anywhere. She willfully violated the rights of others – she knew what she was doing. If she’d do that, no amount of “additional training” will fix what is wrong with her thought process.

“I just think, for her to say you don’t have a desk, you don’t have the same rights, like, that’s just going against what our constitution was based on.” University of Utah student Sarah Campbell