On Sunday, Karen Attiah, the Washington Post’s Global Opinions editor, issued a thinly-veiled threat on Twitter, in a tweet warning white women of “revenge.”  The tweet was taken down, but not before it was archived.  A screen shot of the offensive and threatening message can be seen below, and an archive of the tweet can be seen here.

“The lies & tears of White women hath wrought: -The 1921 Tulsa Massacre -Murder of Emmet Till -Exclusion of Black women from feminist movements -53% of white women voting for Trump. White women are lucky that we are just calling them ‘Karen’s’. And not calling for revenge,” she said.

That sounds just a bit threatening to us. 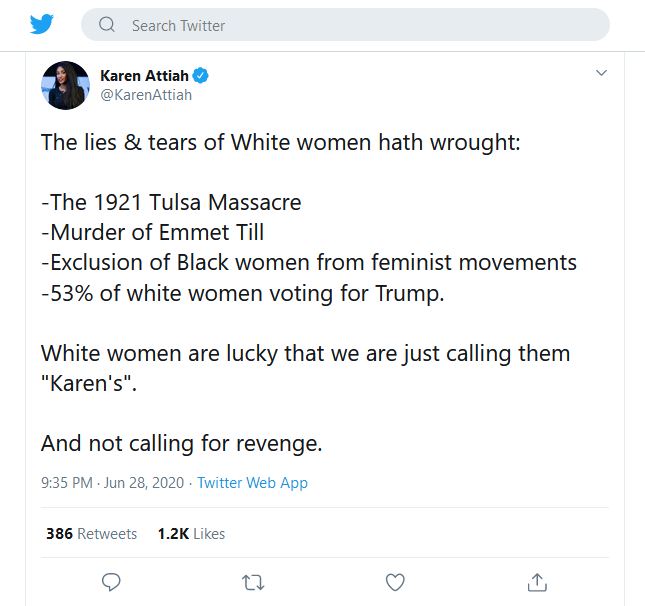 And she doubled down when responding to a like-minded Twitter user: 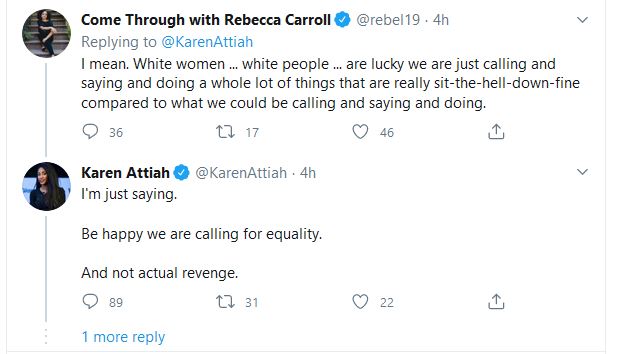 What kind of “revenge” might she have in mind, we wonder.  Perhaps something like what this guy suggested?

Sean Davis, co-founder of the Federalist, also wondered what she meant:

What does “revenge” against “white women” look like in your mind, Washington Post editor? Be as specific and detailed as possible. https://t.co/smnuknpf8V

“Wild” is putting it mildly.  This is beyond “wild” — it’s downright unhinged.

Writing at the Gateway Pundit, Kristinn Taylor said that while Attiah deleted that tweet, she’s tweeted and retweeted other racist tweets about white women.

We are on our way to a new language, I believe.

Wonder what this is supposed to mean?

Tweets like this cause young white Americans to become even more extreme in their politics. Congrats https://t.co/Dv5ZqHS8JF

Perhaps that’s what they really want…