On Saturday, Americans for Legal Immigration PAC (ALIPAC) said that the social media site Twitter censored a meme supporting Sherif Joe Arpaio as a pick for Donald Trump’s Department of Homeland Security, USCIS, or Border Patrol, and refused to let the group promote the message, claiming that it falls under the category of “hate, sensitive topics, and violence.”

On Friday Nov 19, ALIPAC put out a press release and social media meme titled “ALIPAC: Trump Should Appoint Sheriff Joe Arpaio head of Border Patrol or USCIS” (View) Twenty-four hours after the release was sent it has been covered by the Daily Caller (view) and has been shared by 2,400 people with more than 127,000 people on Facebook (view) despite the fact Facebook and Google constantly suppress content from ALIPAC due to their diverging views on immigration issues.

This is the meme: 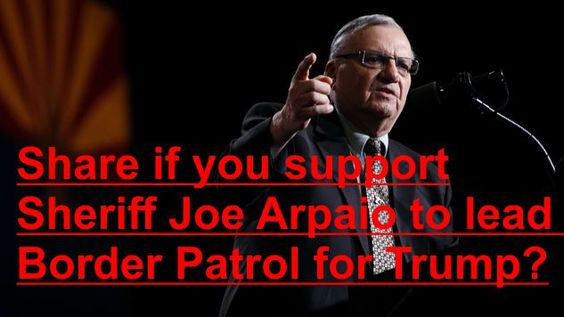 ALIPAC said it tried to advertise the meme, but was told:

Hate, sensitive topics, and violence
Details about this policy are available at https://support.twitter.com/adspolicy/sensitive.

“Despite Twitter’s defamation of Sheriff Arpaio and attempt to censor us and violate our civil rights, the positive response to our request Sheriff Joe be placed in charge of the effort to build the wall and deport violent illegal immigrants has been huge!” said William Gheen, President of ALIPAC. “It’d been very enjoyable reading so many positive comments about Joe Arpaio. It is clear that if Donald Trump appoints Sheriff Joe as head of Homeland Security or the Border Patrol, there will be a loud resounding cheer across America!”

This censorship comes at a time when Twitter is banning conservative voices like Breitbart’s Milo Yiannopoulos and other targets of the SPLC! (View Source)

Google and Facebook recently announced an effort to crack down on “Fake News” but their targets appear to be the conservative publications that helped elect Donald Trump such as InfoWars, Breitbart, Daily Caller, and World Net Daily… Facebook and Google have not mentioned any efforts to silence the fake news coming out of Fox News, CNN, MSNBC, ABC, and CBS all of which claimed it was statistically impossible for Donald Trump to win the Presidency!

Of course, the meme appears to be Constitutionally-protected speech and one would have to twist oneself into a pretzel to suggest that it falls under the category of “hate speech.”

The problem, as Adina Kutnicki and I note in our book, “Banned: How Facebook enables militant Islamic jihad,” is that Twitter, like Facebook, falls under the auspices of Section 230 of the Communications Decency Act, which has been interpreted by a federal judge to mean that social media sites can censor whatever it wants with no legal consequences.

Until that section of the law is amended by Congress and signed into law by the president, sites like Twitter will continue to act like Stalinists, censoring conservative political speech they do not like while letting liberals advocate murder and insurrection.