Mark Levin has given Donald Trump’s tax plan a thumbs up, despite the fact that he is a major supporter of the flat tax.  Levin readily admits that he disagrees with some of the issues Donald Trump is running on, but makes it clear that he does like his tax plan very much:

“Let me tell you the strong things in this.  And he’s very specific for those who want specifics.”

Levin then got into the specifics of the plan:

“From seven tax brackets to four. And the top rate is 25%. The top rate now is 39.6%, but for some people it actually winds up being 43% thanks to the deal the Republicans made with Obama a few years ago. So, the Republican establishment types – the Bushies, the Rep. Paul Ryan (R-WI) guys – they really have no complaint here, because while they voted to increase the top level to 39.6, and in some cases 43%, 25% would be the top rate under the Trump plan – and I would remind you I think it was 27% under Reagan.”

Levin lists other aspects of the plan and sounds excited about the economic growth that would occur if Trump’s plan is put into action:

“Trump cuts the business tax rate from 35% and, in some cases, 39.6% depending on the business type, to 15%.  Could you imagine the amount of economic growth that would occur in this country?”

“He cuts capital gains taxes from 24% to 20%.  No death tax, so anybody who spends their life acquiring assets, having already paid taxes on them many times, to local, state, and the feds, you don’t have to liquidate after your death – your family doesn’t – in order to pass on the family farm, or homes.”

Levin also likes the fact that the Trump plan eliminates the marriage penalty.  He hailed the fact that Trump would allow American companies to repatriate foreign profits back into the United States with a one time tax of 10%.  It is estimated that US companies have over two trillion dollars parked outside the US.  The United States is the only developed country that taxes a company’s foreign profits when they bring it home after paying taxes in the countries where it was earned.

Liberals claimed that the $840 billion they spent paying back Democratic donors including unions would stimulate the economy, but that turned out to be a total failure.  Imagine two trillion dollars added to the economy, not for paybacks but to earn profits and creating jobs.  What a shot in the arm that would be.  If you add to that Trump’s plan to penalize companies who take jobs out of the country to manufacture products sold in the United States, the GDP gains could be astronomical.

I believe that much of Trump’s tax plan was influenced by Carl Icahn, Trump’s choice to take over Yellin’s job at the Fed. 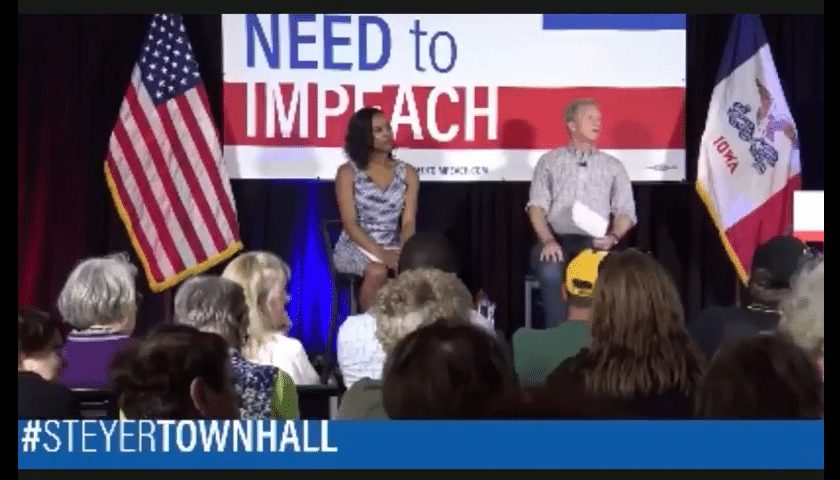 Liberal activist Tom Steyer: Trump a great communicator like Hitler, impeach before he gets as bad as Hitler