Until recently, when someone was asking the whereabouts of a Biden, it was usually Hunter ducking some scandal or another. These days it’s his DAD that has gone MIA.

And this point in history is a really bad time for him to turn invisible.

We were sounding the warning that a weak pseudo-leader like Biden would signal weakness on the national stage — weakness that would be exploited by our enemies.

Obviously Biden’s weakness was exploited by the worst kind of criminals selling people into slavery on our borders, including sophisticated cartels who routinely rape their victims to death, as exposed in this long-form interview with people who are actually on the front lines of this issue. Sex Slavery On The Southern Border (Language Warning)

But it’s exploited internationally as well. How else do you explain the state of the world, barely 100 days after the new guy took over?

Russia is testing Ukraine’s borders… again.
North Korea is getting involved in saber-rattling, again.
China is eyeing Taiwan and getting aggressive with their neighbors.
Iran’s gunboats are swarming American vessels, daring them to do something about it.

Hamas is firing hundreds of Iranian-provided rockets into Israel.

Let it not be said that we’re only telling one side of the story. Here’s the Hamas leader gloating about this…

They kicked Donald Trump off of Twitter. Meanwhile, the leader of Hamas is on this platform celebrating "the bombing of Tel Aviv." pic.twitter.com/GSnoQwdIJr

Show this video to the Eco-Zealots who rage against Israel and defend Palestinians.

Hamas has announced that they fired A-120 rockets towards Tel Aviv with a range of 120 kilometers.#BREAKING
Rocket from Gaza has damaged the Trans-Israel Pipeline in Ashkelon. pic.twitter.com/dE2VaSKerd

Do these terrorist acts and burning oil fields offend Mother Gaia, too? Or is it ok so long as they are directed at the right enemy?

The predictable gratuitious barbs were thrown at Trump — and shot down.

Trump had something to say about the situation today. 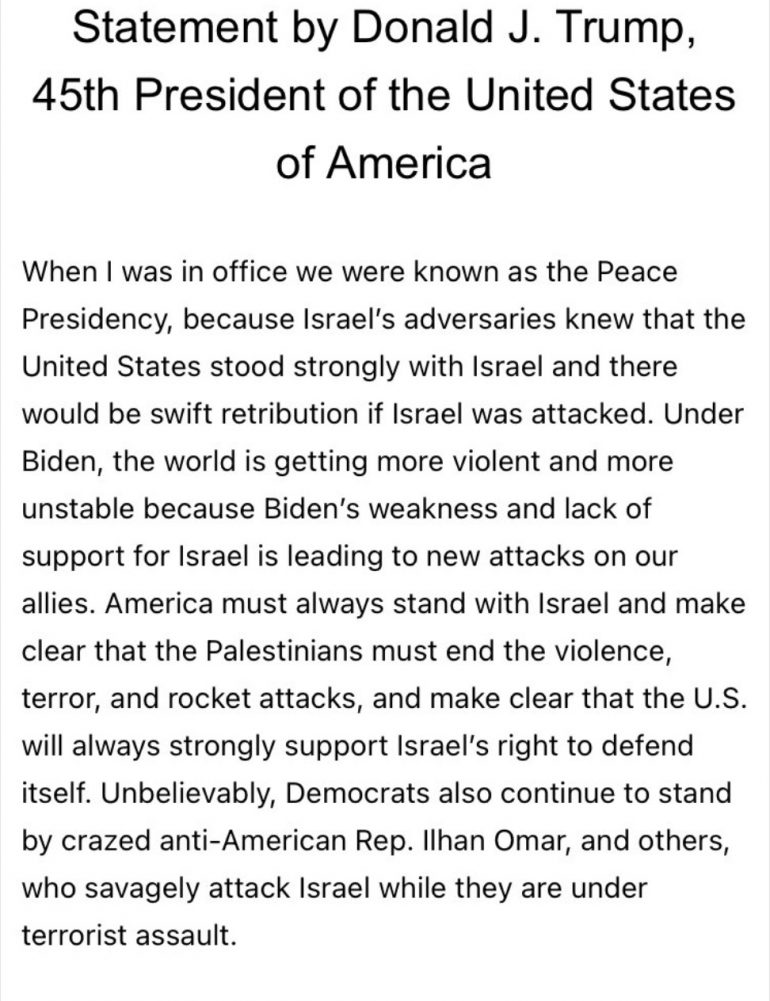 That got people talking about the elephant in the room…

White House spokeswoman Jen Psaki opened her daily news briefing with a statement about the situation, saying that President Joe Biden had just received an update from his national security team and that his primary focus was on de-escalation.

She said the United States condemned rocket attacks by Hamas and other groups, including attacks on Jerusalem, and that Biden’s support for “Israel’s security, for its legitimate right to defend itself and its people, is fundamental and will never waver.”

“Jerusalem, a city of such importance to people of faith around the world, must be a place of co-existence,” Psaki said.

U.S. officials in recent weeks have spoken candidly with Israeli officials about how evictions of Palestinian families and demolition of their homes “work against our common interests in achieving a solution to the conflict,” Psaki said. –USNews

We do note that this statement was delivered by Psaki, and not Joe himself.

The ‘eviction’ case she mentioned is a question before the courts of who rightfully owns land that had been confiscated a couple of generations ago.

Then again, this wouldn’t be the first time that Biden tried to involve himself in the legal procedures of a sovereign state, would it? Do the words ‘sonofabitch, he got fired’ ring any bells?

And for anyone hoping the UN will ride in on a white horse? Don’t hold your breath.

To answer the ‘where’s Biden’ question we began with… isn’t the answer obvious?

Peace talks begin with NO hope for peace