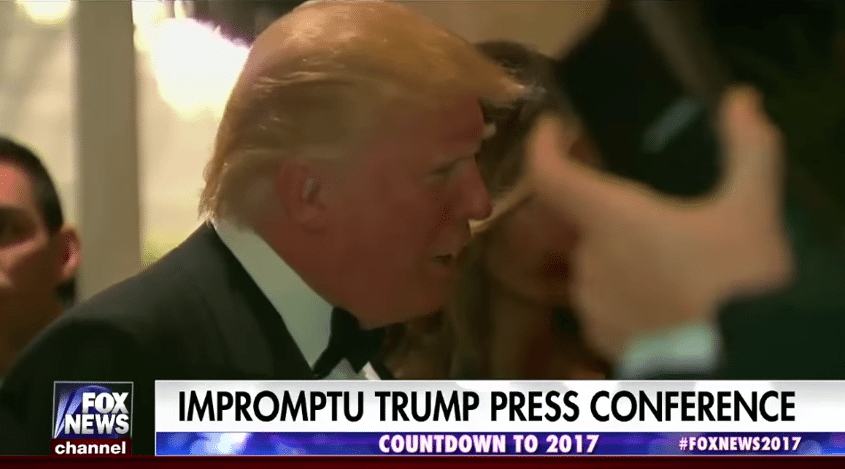 “I think it’s unfair if we don’t know. It could be somebody else. I also know things that other people don’t know so we cannot be sure,” he said.

When asked what that information might include, Trump said, “You will find out on Tuesday or Wednesday.”

He did not elaborate.

But he said that any computer is subject to hacks.

“It’s very important. If you have something really important write it out and have it delivered by courier the old fashioned way,” Trump said, adding, “No computer is safe, I don’t care what they say.”

Trump tried to end the year on a positive note, however, despite questions about the future of U.S.-Russia relations because of escalating tensions between Obama and Russian President Vladimir Putin, as well as Trump’s promise to crack down on China’s trade practices, which he says unfairly target American workers.

Trump was responding to questions about his position on the alleged Moscow-backed “hacking” of the Democratic National Committee that resulted in the emergence of leaks unfavorable to Hillary Clinton. While he has consistently shrugged off the accusations, which also claimed he was backed by Russia against Clinton, Trump on Thursday reacted to the new sanctions against Russia and the release of a report by the FBI and the DHS with a promise to attend intelligence briefings to be updated on the matter. Russia at first vowed to retaliate, but on Friday, President Vladimir Putin said his government wouldn’t expel U.S. diplomats in reprisal. That, in turn, prompted Trump to post on his Twitter account: “Great move on delay (by V. Putin). I always knew he was very smart!”

The President-elect said he wanted to press U.S. intelligence agencies to make sure they are correct in asserting that Russia was behind a cyberattack aimed at disrupting the 2016 presidential race, asserting that the US intelligence community has been wrong before. He made reference to a government assessment before the U.S. invasion of Iraq in 2003 that the country’s former leader, Saddam Hussein, possessed weapons of mass destruction.