Senator Rand Paul met with President Trump on Monday to ask that the security clearance of former CIA chief John Brennan be revoked. Senator Paul states Brennan has been “monetizing and politicizing” his knowledge by appearing on liberal news channels to bash the President over the Helsinki Summit, according to the Washington Times. The President is considering revoking several security clearances, according to Fox. 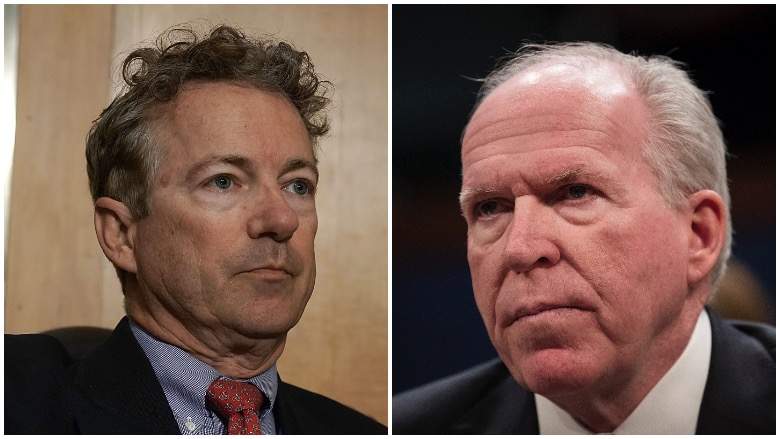 Today I will meet with the President and I will ask him to revoke John Brennan’s security clearance!

The President has taken it one step further: he is looking at revoking security clearances of several Obama Administration officials from John Brennan to James Clapper on down the line to Susan Rice, James Comey, Michael Hayden, and Andrew McCabe.

James Comey and Andrew McCabe supposedly lost their security clearances when they were fired, so those theoretically are a mute point. Unless someone has been feeding them information they are not supposed to have.

General Michael Hayden simply said that he doesn’t go back for classified briefings, so it will be irrelevant for him.

I dont go back for classified briefings. Won’t have any effect on what I say or write

Over the weekend the FISA application (a heavily redacted one) was released that suggested that the “Trump Dossier” (also known as the Steele Dossier) was the main basis for going after Carter Page.  The document was so blocked out that reading it is an exercise in futility.  The President could declassify it, but so far has not done so.

There is still no information available as to whether or not the FBI/Intelligence community independently corroborated anything in the document before using it to wiretap the Trump Campaign. But if in fact these agencies used a fake document to get their wiretap, it’s an egregious violation and should be prosecuted.

Obama Administration officials have used that document not only to target the Trump Campaign with accusations of “Russian Collusion,” but have monetized and politicized their actions continually.

Even if the President is able to disengage their security clearances, unless we have one of those mind-erasing pens from “Men in Black,” it won’t help a lot. But it would at least cut off their access to current intelligence data since they no longer work for the Federal Government.