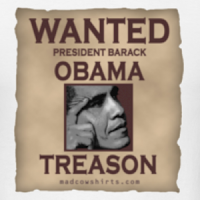 Scandals…scandals everywhere…DC is awash in them and I’m sure more will be coming, but even with all these scandals charges of impeachment will NOT be brought against this most miserable excuse of a president, for this is a man with the gift of gab who seems to be able to talk his way out of anything as he easily plays the scandal cast of characters like a fiddle. Or so he thinks for even with all his bloviations, and while TREASON is NOT a word usually associated with a President of the United States…TREASON is indeed a word befitting this president for Barack HUSSEIN Obama is guilty of TREASON making all the scandals pale in comparison.

Defined in our Constitution in Article III, Section 3, “Treason against the United States, shall consist only in levying War against them, or in adhering to their Enemies, giving them Aid and Comfort. No Person shall be convicted of Treason unless on the Testimony of two Witnesses to the same overt Act, or on Confession in open Court. The Congress shall have power to declare the Punishment of Treason,but no Attainder of Treason, shall work Corruption of Blood or Forfeiture except during the Life of the Person attained.”

Giving ‘aid and comfort’ to our enemies in a time of war is called treachery or perpetration…and as America has been at war with islam since 9/11…and YES we are indeed at war with islam when all the political correctness nonsense is thrown aside…if you attempt to aid and/or are caught aiding an enemy in wartime in any way, you are subject to either being sentenced to jail for over 100-250 years, shot on sight, or hung…and Barack HUSSEIN Obama is in-your-face guilty of treachery and so should be charged, tried, convicted, and sentence carried out. After all, if any of ‘We the People’ gave ‘aid and comfort’ to the enemy we would be brought up on charges of TREASON…or would we be as the enemies of America are Obama’s allies and friends…just something to think about.

And as in the case with all those who have previously been charged with TREASON against America, TREASON requires traitorous intent meaning the acts done were done on purpose, and in the case of Barack HUSSEIN Obama this falls under numerous headings including ‘aiding and abetting the enemy’ (while a bit different than giving ‘aid and comfort’ it is still legally recognized grounds for TREASON charges as the two go hand-in-hand) for while Obama might NOT have personally carried out the traitorous acts himself, our legal system states acts by which the person committing treachery include having another person carry out the illegal act as they are an agent of the charged party or they are working together with or under the direction of the charged party…meaning Barack HUSSEIN Obama.

Meaning Benghazi…meaning secretly shipping weapons to al-Qaeda backed rebels in Syria from Libya through Turkey…meaning the MURDER of four Americans…meaning watching those same four Americans die in real time and doing nothing to help them…meaning giving orders to ‘stand down’…meaning trying to cover up the truth…meaning trying to slander, defame, and dishonor the whistleblowers…need I go on.

And there are other cases for charges of TREASON being brought against this president for by ‘adhering’ to our enemies by NOT only giving them ‘aid and comfort’ but also by ‘aiding and abetting’ them by giving them the very arms this president has…knowing full well that they will be used against Americans (and our ally and friend Israel) in the NOT so distant future…this president willingly and knowingly armed an enemy of America…as in the Muslim Brotherhood controlled Egyptian government…armed them with F-16 fighter jets and Abrams tanks that ‘We the People’ unbeknownst to us paid for with our taxpayer dollars…and this is TREASON. 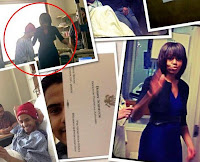 ‘Aiding and comforting’ the enemy takes on heightened meaning when right after the Boston Marathon Bombing, a Saudi national, who was here on a student visa, was detained on suspicion after being superficially hurt has a hospital visit by Michele Obama (which in and of itself raises major red flags) as this young man had, since 2009, been a guest at the While House on numerous occasions, attended the same mosque as the Tsarnaev brothers, and who after Obama has a non-scheduled meeting with Saudi officials, is ‘suddenly’ released from the hospital and deported with NO charges filed against him even though his family has terrorist connections, and is connected to wealthy important Saudi officials.

Hmmm….’aiding and comforting’…more like aiding and giving with malicious intent a ‘get out of jail free card’ to the enemy…TREASON.

And this president’s decision to tell our enemies our timetable for withdrawing American troops from the Afghan and Iraqi theaters, has taken the very people our brave troops gave their lives and limbs to free right and delivered them right into the hands of the enemy…the Taliban…for now all they have to do is sit and wait until we’re gone to take away the freedoms we gave to those people. And if that’s isn’t TREASON through treachery against those people and against those Americans who made the ultimate sacrifice I don’t know what is.

Now add in that BARACK HUSSEIN OBAMA willfully and knowingly violated Article 1, Section 9, Clause 8, of the Constitution which states that “No Title of Nobility shall be granted by the United States: And no person holding any office of profit or trust under them, shall, without the Consent of the Congress, accept of any present, or Emolument, Office, or Title, of any kind whatever, from any King, Prince, or foreign State”…when he accepted the position of Chairman of the U(seless) N(ations) Security Council, for by accepting leadership in an organization that is most assuredly at odds with the Constitution is grounds for TREASON charges being levied against him.

And there are so many other TREASON charges that can be placed upon Barack HUSSEIN Obama…charges too numerous for a standard editorial piece but briefly…charges like violating ‘The Wars Power Clause’ of our Constitution (Article I, Section 8, gives Congress the power to declare war by stating, “Congress shall have Power…] To declare War, grant Letters of Marque and Reprisal, and make Rules concerning Captures on Land and Water…”) when he got us involved in Libya, a country we NEVER declared war with, a country who posed NO threat to America, and by doing so started the entire Arab Spring turned horrible Arab Winter process in motion…TREASON…

Charges like willfully and knowingly placing six Muslim Brotherhood operatives, who did NOT need Senate approval, into positions of power within our government (Arif Alikhan, assistant secretary of Homeland Security for policy development; Mohammed Elibiary, a member of the Homeland Security Advisory Council; Rashad Hussain, the U.S. special envoy to the Organization of the Islamic Conference; Salam al-Marayati, co-founder of the Muslim Public Affairs Council (MPAC); Imam Mohamed Magid, president of the Islamic Society of North America (ISNA); and Eboo Patel, a member of Obama’s Advisory Council on Faith-Based Neighborhood Partnerships)…TREASON…

Charges like having Linda Sarsour, the director of the Arab American Association of New York, who has on-the-record defended, condoned, and applauded terror suspects and their actions…a woman who claims and lectures about the underwear bomber being a CIA operative…a women vehemently anti-American who has been a guest at the Obama White House seven times within the past year…and for what purpose would a president meet with someone, entertain someone, someone so opposed to this country…for NO other reason than to fraternize with the enemy during a time of war…TREASON.

There are just so many charges of TREASON that could be brought against this president…but I leave you with this one, an extremely serious one happening right now but going unreported by the media…for Barack HUSSEIN Obama is NOT only once again lying to the American people about NO boots on the ground in Syria, he is again trying to circumnavigate the ‘War Powers Clause’ by getting us involved with a county that is NO threat to America yet he has fully committed our country to the side of armed rebel groups with ties to al-Qaeda…and al-Qaeda is most assuredly our enemy…for now almost 3,000 American so-called ‘advisers’ are in Jordan, ready to go up against, if need be, the 4000 Revolutionary Guards Iran just pledged to send to aid Assad’s forces…TREASON…

TREASON for getting us involved in yet another war as we wind down from the current wars…an independent country’s civil war that we have NO business being involved in…a war in a country that poses NO threat and is NO friend to America…and this president doesn’t care for by siding with the ‘badder guys’ (see my previous op-ed) who are his brethren, Barack HUSSEIN Obama proves his loyalties lie with America’s enemies as he dishonors and thumbs his nose at the laws laid down in the Constitution, and that is indeed TREASON.

Now if only someone in Congress had the guts and courage to NOT fear the race card being used against them, and would do what they know needs to be done…sigh…………..

Biden’s DHS: “No Crisis at the Border.” Except for the Crisis...

Biden And Dems Moving Ahead On Anti-Gun Legislation
March 8th, 2021 The Lid