“Honi soit qui mal y pense.” That Anglo-Norman phrase, which appears as a motto on the Royal coat of arms of the United Kingdom, loosely translates as: “Shamed be he who thinks evil of it.”  This bit of ancient lore came to mind this morning when I read an article at National Journal with the headline “Donald Sterling Is Not Cliven Bundy.” In case the author’s point might be misconstrued, the subheadline explains that the “Clippers’ owner’s alleged remarks are far more sinister.”

So what in the view of author Matt Berman makes Sterling’s comments more reprehensible? It’s this:

Cliven Bundy is just a rancher, Donald Sterling is a massively powerful, wealthy, and influential man. What’s hard about Sterling’s case, and what makes it completely different from Bundy’s, is that it reveals that even at the top of one of America’s proudest, most diverse institutions, an abject racist can still pull the strings.

Wait, Cliven Bundy is just a rancher? From the ubiquitous impassioned din that rose up on the left following the New York Times’s release of comments he had made, you’d think the guy was running for King of the Universe.

Nevertheless, it is true that Sterling is a higher-profile individual and likely, judging from his recorded comments, an “abject racist.” But what still remains to be determined is the circumstances under which that recording was made and whether, in fact, the male voice on it is actually that of Sterling.

I’m not being coy here. I’m being circumspect and doing due diligence, just as Berman does by referring variously to the tape as “alleged” and “purported to reveal the Los Angeles Clippers owner berating his mixed-race girlfriend.”

But I digress. Assuming that the voice on the tape is Sterling’s, was he aware that a recording of the conversation was being made? Did he intend for his innermost thoughts to be made public?

This is no small matter. Cliven Bundy made his comments openly, in front of a rolling video camera. Sterling’s opinions seem to have been gathered surreptitiously. If that is the case, he is protected by federal wiretapping laws and can sue the pants off V. Stiviano or whoever made the recording, but he has no protections in the court of public opinion. He is currently being vilified for something he likely said in private. He is being crucified for his thoughts.

Make no mistake. I am not defending the man or his comments. If anything, his political affiliation — he is a Democrat and has contributed to the campaigns of fellow Democrats — shoots to hell the left’s argument that racism is exclusively an affliction of the right. But when we start judging people based on their thoughts, we are entering a very dangerous region. 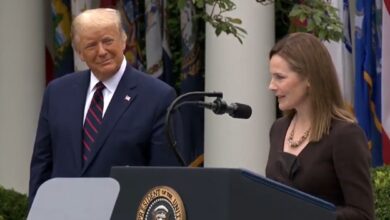 If Never-Trumpers Had Their Way, Roe v. Wade Would Have Never Been Overturned