Try following the imperative in this tweet. Try to imagine someone saying, “The only way to stop shark attacks is with more sharks.” If you can’t conjure up a mental picture of a sentient capable of making a statement so breathtakingly idiotic, glance at the photo further down the page for a spoiler alert.

In this, liberal wunderkind David Hogg’s latest assault on the Second Amendment, he is actually thinking outside the box — for him. That is, he is searching for a real-world analogy that will dismantle the “good guy with a gun” argument. 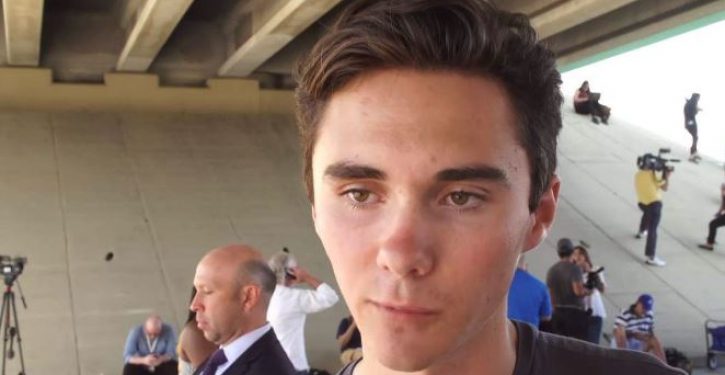 In doing so, he has fallen into the logical trap known commonly as comparing apples and oranges. Put more concretely, there are no good sharks or bad sharks. There are just sharks. When a shark smells human flesh nearby in the water, the only thought that occurs to it is “lunch.”

Unlike attacks with guns, which are motivated by one or another human drive or ambition — greed, passion, or the like — sharks are motivated solely by the atavistic urge to survive. Whenever a fresh food supply becomes available, the shark eats.

Needless to say, young Hogg converted himself into instant shark bait with his analogy. Some of the kinder reactions:

Yah. But the only sharks with guns are criminal sharks.

Imagine saying the only way to stop shark attacks is with shark control.

We can be sure there are no sharks in our schools. Or houses of worship. Or in line dancing clubs.

At least none with fins and gills, anyway…

Sharks caused 35 deaths in 6 year. Accidents with selfies around 260, I am afraid of selfies…..

Poor David. He’ll have to head back to the drawing board and try again, though in his next tweet he should studiously avoid sharks. They are notorious for their small brains.