It seems that leftists these days are not only ignorant about history, they seem to delight in it.  On Friday, rapper Talib Kweli Greene issued a tweet falsely claiming the Nazis built the Berlin Wall.

“So, you’re unaware of the fact that nazi Germany had a wall called the Berlin Wall that was torn down in 1991 in order to foster humanity and diversity? Walls didn’t work for Nazis so why build them here? Build bridges not walls Nazi lover,” he wrote on Twitter in response to another social media user.

The tweet no longer exists, but was captured for posterity and an archived version can be seen here.

Here’s a screen shot of his historically-challenged message: 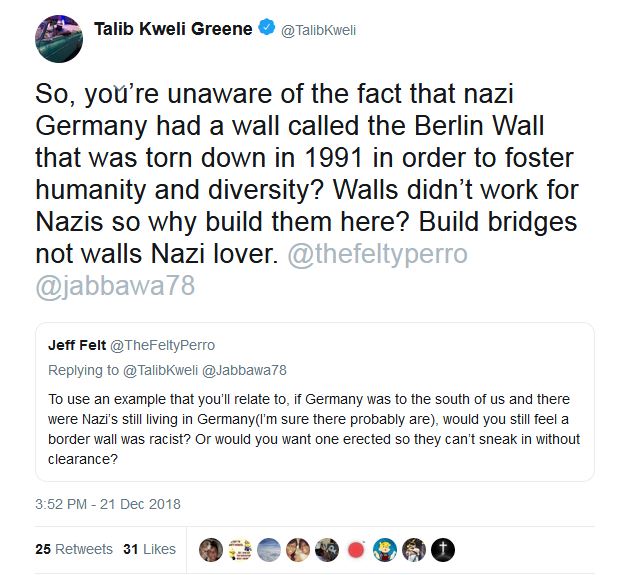 Actually, the Nazis didn’t build the Berlin Wall — that was the Communists, and the wall was built long after the end of World War II — after the Nazis were defeated.  And it wasn’t torn down to “foster diversity,” as Greene falsely claimed.

Apparently, Greene wasn’t too concerned with historic fact when he issued his message, something quite a few people on Twitter mentioned.

The Berlin Wall was build by Soviet Union controlled East Germany to keep their people IN not OUT.

Greene responded to this by implying the Twitter user who criticized him is a Nazi.  Why?  Because he/she has an “88” as part of his/her username.

Of course.  Because anyone who disagrees with an ignorant leftist like Greene MUST be a Nazi, right?

@TalibKweli You’re doing solid work but the Berlin Wall was not synonymous with Nazi Germany.

Green actually claimed he knew that:

If he already knew the Nazis didn’t build the Berlin Wall, why on earth did he say it?

One person tried to inform Greene about the construction of the wall:

Continued: How do you expect anyone to take you seriously and engage you in debate if your are here on Twitter throwing around Falsehoods? Construction of the Berlin Wall started on Aug. 13, 1961 in the German Democratic Republic, which was a puppet of the U.S.S.R.

Greene, however, wasn’t having any of that, and claimed the person giving him the information on the Berlin Wall was actually defending “racist liars.”

When did I ask anything from you at all? Who are you? How do you expect to be taken seriously when you rush over to defend racist liars? pic.twitter.com/6qlSi7epsj

Apparently, historic fact is now racist and only Nazis insist on being factual.

Talib Kweli’s social media posts are not only fact-deficient, they are often hate-filled and vitriolic. In 2016, the “Get By” rapper attacked Breitbart News’ Jerome Hudson, repeatedly disparaging him with the racial slur “coon.”

This, by the way, is the modern left — loud, ignorant and proud of it.

By the way, there is a GoFundMe effort under way to help fund Trump’s border wall. That effort has now collected over $16 million and is still going strong.  You can see that GoFundMe campaign by clicking HERE.