Hollywood is at it again with their vicious Trump-hate. This time, in a Tweet that brought outrage over its content, they hinted at assassinating President Trump. The CBS Drama “The Good Fight” tweeted a picture of part of the plot to the show, and they knew it would gather outrage. It was what they were hoping for in the first place. More outrage, more publicity. 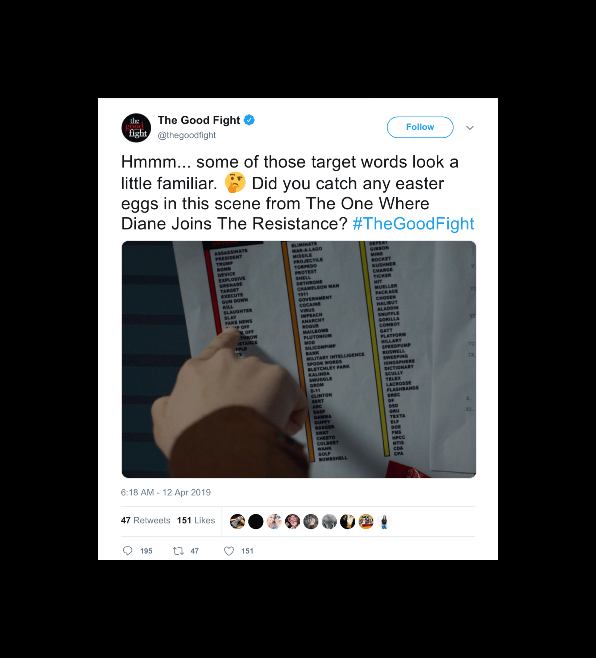 Last year, one of the characters of the show did the same thing- she said that “We need to assassinate the President.” The character of attorney Diane Lockhart, is a known Trump-hater. The character is played by actress Christine Baranski, someone Trump haters can relate to on a personal level. But is it a good idea to keep promoting this kind of idea? No.

Threatening the President of the United States is a federal felony under United States Code Title 18, Section 871. It consists of knowingly and willfully mailing or otherwise making “any threat to take the life of, to kidnap, or to inflict bodily harm upon the President pic.twitter.com/2g2iLEVyf2

The thing about Hollywood is that they are oblivious over how deadly their rhetoric is for the mentally whacked out killers who have murdered in the name of movies and television shows. Or maybe they just don’t care. Are they just on a roll with their Trump-hate and really want him to be assassinated? They say not, but actions speak much louder than assurances that it’s “just TV.”

Despite the CBS political drama’s obsession with plot points that involve the impeachment or assassination of President Trump, The Good Fight co-creator Robert King claims these storylines are merely a satirical take on America’s current political climate.

“The Democrats are licking their chops at the possibility of turning the House over and impeachment,” King said in January. “So it’s really a satire of Democrats wanting to impeach a sitting president in a way that would make them angry if it were Republicans going after Obama.”

Oh yeah, it’s just “satire.” It’s just a “joke.” If their continual “jokes” manage to get the President killed, I hope they get prosecuted as accomplices. Every last one of them.