(Natural News) Imagine walking into a grocery store in your own hometown in America one day in the future and, upon grabbing your items and arriving at the checkout counter, are ‘told’ by the automated cashier scanning them that the number of items you had attempted to purchase had ‘gone over‘ your monthly quota.

Insisting that you had only purchased the few items on your list, you quickly understand why it’s quite futile to argue with the A.I. ‘cashiers’ that most stores had brought in to replace their human workers, many whom resigned rather than getting their ‘mandated‘ 13th and 14th booster shots, with the 1st through 12th booster-shot series bringing about so many casualties most workforces were decimated.

Then requesting that the store manager come to help work out the issue, you instead find yourself surrounded by A.I. security bots, armed to the teeth with future weaponry and packing the programming written by the ‘critical race theory trained‘ government computer/bot programmers.

Realizing that you are now in a no-win situation as the liberal new world order government, along with medical martial law fully installed in the year 2023, had largely succeeded in disarming the American people in the year 2022 after the ‘Brandon Administration‘ had completely collapsed the economy, fully turning America into the 3rd world hellhole Democrats had envisioned America to be way back in the year 2021. And while it might sound ‘futuristic‘, the scenario outlined above might not be so far off if the globalists get their way.

As the Daily Reckoning recently reported in this story titled “Get Ready For Food Rationing”, “these people are part of a cult. They do not oppose poverty. They think it’s about time we experienced it. Poverty is good for us. Deprivation is plenty. Inflation is prosperity. Empty shelves are a reset to the way things should be.”

Warning within that story that if we keep traveling down the same path that America is now on, with empty shelves being filled with cardboard cutouts and a supply chain fiasco of the greatest proportions under Joe Biden, we’re headed towards ‘socialism’ and the same kinds of problems experienced by Venezuela and nearly every other socialist nation of late. From this Daily Reckoning story before we continue.:

The Washington Post has published an article (ANP: about the shortages, food price spikes, etc) by one of its regular contributors (Micheline Maynard) with one message: GET USED TO IT!

She says that we have come to expect too much for the economy. Ever since 1911, she says, we’ve been obsessed with getting stuff and getting it fast. That’s dumb, she says. Deprivation is not only the new normal; it’s the way things should be.

“Across the country, Americans’ expectations of speedy service and easy access to consumer products have been crushed like a Styrofoam container in a trash compactor,” she writes. “Time for some new, more realistic expectations.”

For example, she writes of the candy shortage. The milk shortage. The everything shortage. Then she concludes: “Rather than living constantly on the verge of throwing a fit, and risking taking it out on overwhelmed servers, struggling shop owners or late-arriving delivery people, we’d do ourselves a favor by consciously lowering expectations.”

How bad can it get? She saves the best for the very end:

“American consumers might have been spoiled, but generations of them have also dealt with shortages of some kind — gasoline in the 1970s, food rationing in the 1940s, housing in the 1920s, when cities such as Detroit were booming. Now it’s our turn to make adjustments.”

You might read that again. She is defending gas lines. More astonishingly, she is going on about the glorious suffering of wartime, when food was rationed with rationing tickets! You cannot make this stuff up.

What’s worse, that The Washington Post published it reveals something about what they imagine could be our future. And by future I don’t mean distant future. I mean next year.

These are people for whom socialism was not a failure but a triumph in which people learned to become a new form of community through suffering. In fact, they are pro-suffering. It’s a new form of leftist ideology that has gained steam for decades. Now they are in charge. They get perverse pleasure out of the whole scene.

It doesn’t matter how bad it gets. Our leaders will never admit failure. They will look at the disaster they are creating and call it success. This is what is truly chilling about the unfolding crisis: They do not believe it is a crisis. They think this is a reset to the way things should work.

With ‘human worker shortages‘ one of the huge reasons America is now witnessing the kinds of shortages that we haven’t seen in this country for a long time, and the lockdowns and ‘mandates’ one of the reasons why so many companies are seeing such labor shortages, every state in America could learn from the state of Nebraska.

Reporting within that story that economists cite a combination of factors that have kept joblessness in the state well below the U.S. average from the onset of the pandemic, including Nebraska having far fewer govt-imposed restrictions on their businesses due to many of their businesses deemed ‘essential’, the state’s combination of many agricultural and food-processing jobs helped the state be much more ‘resilient‘ to the hit that the lockdowns had than many US states.

Yet as we see in this recent story over at AG Web, according to the North American Meat Institute, labor shortages are the key reason why we’re now witnessing sky-rocketing meat prices in 2021, as well as steady and increasing inflation in other food products, giving us all a reason to prepare here in America as if one day, the nightmare scenario laid out above is the ‘new reality‘ in America. From this AG Web story we see that even the Meat Institute is taking a shot squarely at Joe Biden for this fiasco.:

The labor shortage is a significant factor driving food prices higher. That’s the testimony of the North American Meat Institute in a House Ag Committee hearing, “The Immediate Challenges to our Nation’s Food Supply Chain.”

“Just six weeks ago, the Biden Administration tried to blame the meat and poultry industry for the rising cost of food,” said Julie Anna Potts, President and CEO of the North American Meat Institute. “Today, the Congress will hear from other food manufacturers, shippers, input suppliers, growers and retailers enduring the same labor shortages up and down the food supply chain that are driving the record cost of food at the holidays.”

Meat Institute member are still recovering from the pandemic, which increased labor challenges at the same time consumer demand was increasing. The surge in demand happened while packers’ ability to process livestock was experiencing operational constraints, and has continued into this year because labor availability has similarly affected the packing industry’s ability to operate at full capacity.

As a solution, the Meat Institute says it has supported legislation to allow the meat and poultry industry access to an expanded, year-round agricultural guestworker program because the current, seasonal nature of the program fails to meet industry needs.

With Business Insider just reporting “The US food supply chain relies heavily on foreign workers, and now those industries are suffering the worst labor shortages” the latest sign of ‘food troubles‘ ahead for America, and food and potable drinking water absolute must-have products that cannot be ‘put off’ for even a little while like other supplies such as cleaning products, we’re reminded that only 9 meals separate a civilized society from total anarchy, and America is definitely NOT immune to a Venezuela-like scenario unfolding here, especially with Joe Biden and Democrats ‘at the helm‘. 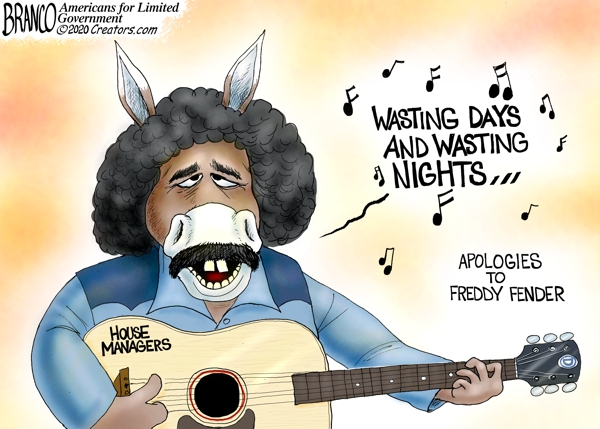 Cartoon of the Day:Waste Management