THERE are certain actions which are borne out of power politics, while others emerge from ideological fixations. Still yet, some are combinations thereof. Said duality is the driving force behind Chancellor Merkel’s rule – her leadership, for almost 15 years, reflects as much. Not only that, as the head of Germany, the 4th largest economy in the world, the heft she wields across Europe (and beyond) is enormous.

SO much so, even socialist-leaning and globalist-driven Zuckerberg (in total control of Facebook, the largest social media site on the planet and deemed the world’s most dangerous censor – who is more akin to the “Master of the Universe” than the leader of a corporate behemoth) understands that cooperating with Merkel is in his bottom-line interest. As it happens, her diktats mesh with his ideological worldview, too. Indeed, the Stasi would have loved Facebook’s total control over the flow of information across the Internet! They would have been so proud of Zuckerberg; a mega powerful and totalitarian-thinking American media overlord. As such, during the now infamous “hot mic” reveal, the following was witnessed for the world to hear and confirm:

German Chancellor Angela Merkel was overheard confronting Facebook CEO Mark Zuckerberg over incendiary posts on the social network, Bloomberg reported on Sunday, amid complaints from her government about anti-immigrant posts in the midst of Europe’s refugee crisis.

In recent weeks, hundreds of thousands of Syrian refugees have washed up on Europe’s shores, seeking asylum from the raging civil war in their homeland. As Europe’s largest economy, Germany has sheltered the majority of them, leading to widespread objections within the country.

Earlier this month, Facebook vowed to clean up what it deemed was racist content on the German version of its website. At the time, the social network said it would partner with a non profit group to oversee hate postings.

(Merkel pictured under a FDJ banner – Free German Youth, also known in German as Freie Deutsche Jugend – she was one of the leaders of its agitation and propaganda arm for communist and socialist fronts…hmm)

TO wit, the duo’s (with many power players in league) like-minded cooperation is not for nothing. Not only that, westerners ignore the overall messaging contained within such symbiosis, that is, between world leaders and media moguls, at their own peril. This is inexorably the case, as countless so-called migrants/refugees have been known to murder, rape, pillage, and otherwise wreck havoc across Germany, as well as throughout Europe at large. Mind you, if not for the fact that Merkel gave the “green” (Islamist) light for the influx of millions of Muslims, well, Europe would not be in the worst shape it has been in, well, since Nazi Germany stormed the Continent!

Merkel has been perhaps the main author of the culture-rending mass migration into Europe, which brought one million Muslim migrants into her country in 2015 alone. This led to a crime wave, which included large numbers of sexual attacks on native women, and culture shock among many Germans, all while Merkel tried to sell the scheme with the Obamaesque slogan “We can do this!”

But increasing numbers of Germans aren’t buying, and now Merkel may be more imperiled than her nation. In fact, referencing her clash with Interior Minister Horst Seehofer, German MP Kai Whittaker said, “We are in a serious situation because the question of the migration crisis evolved into a power question,” reports the Express.

“The question is who is leading the Government?” he explained. “Is it Angela Merkel or is it Horst Seehofer?”

As for who is leading Europe on the migration question, it increasingly isn’t Merkel. Italy’s new pro-sanity government recently denied migrant-transport ships entry to its ports; this may reflect a domino effect inspired, largely, by stout-hearted Hungarian prime minister Viktor Orbán.

As Breitbart recently reported, “Tens of thousands of migrants are simply rerouting around Hungary to reach the generous welfare states of Western and Northern Europe, however — with the new Orbán-aligned populist coalition in Austria warning that it may seal its southern border with Slovenia as a result. Bosnia, in turn, warns that they will respond by sealing their southern borders with Serbia and Montenegro, to forestall a situation where migrants travelling north through their territory en route to Austria become bottled up after their path is blocked.”

This opposition should only increase, especially if a simple truth becomes recognized: The “refugee” crisis is a con.

OF course, the fake news media complex has zero interest in laying it all out  unless it fits their socialist-Islamist captured narrative.

YES, Stasi inculcated socialists and communists (Merkel, this alternative media finger is pointing at you!) are of like-mind with Islamo-fascists, the ubiquitous red-green alliance – in no way more so than in their hatred of Jews. Christians, too, are in their cross-hairs.

IN fact, “Europe’s Cauldron of Jew-Hatred Skyrockets, Imperiling Non-Muslims: Knock-On Effect To Mohammedan Takeover” (April 26, 2018) is one of several disinfectants within these pages.

IT is along the above truth-telling (and so much more) terrain that another ! “migrant/refugee” infused with Mohammedan fervor went on an “Allah Akbar” rampage in Germany – even as countless are running riot throughout Europe and the west in toto.

Berliners have expressed disbelief after a Syrian migrant who stormed a synagogue with a knife yelling “Allah hu Akbar!” was freed from jail only a day later.

The incident occurred at a synagogue in the middle of Berlin on a Friday. Syrian migrant Mohammed M., 23, climbed over a security fence armed with an eight-inch-long knife and stormed the building while yelling “Fuck Israel!” and “Allah hu Akbar!” before security guards pepper-sprayed him, Bild reports.

Police subsequently arrested the 23-year-old, but he was released the next day. According to a police spokesman, the local prosecutor did not consider the man was sincerely trying to hurt anyone, just trying to threaten them.

Breitbart London@BreitbartLondon
Antisemitic Incidents Surge in Berlin with over 1,000 Cases in 2018 https://www.breitbart.com/europe/2019/04/20/antisemitic-incidents-surge-in-berlin-1000-cases-2018/ …

Antisemitic Incidents Surge in Berlin with over 1,000 Cases in 2018

The number of antisemitic incidents in the German capital continues to grow with experts warning that incidents are becoming more violent.

Berlin defence lawyer Alexander Pabst expressed dismay as to why the Syrian was not assessed by a medical professional.

“In addition, one could at least have a suspicion of a particularly serious breach of the peace, at least,” Mr Pabst complained.

Others were far less generous in their assessment of the way authorities handled the incident. Gideon Joffe, chairman of the Jewish community in Berlin, labelled the event a failed terrorist attack.

“Especially at this time, an attack on a Jewish institution in the middle of Berlin must be comprehensively investigated and punished with zero-tolerance measures,” a spokeswoman for the Israeli embassy in Berlin added.

Bild spoke to the father of the 23-year-old, who said his son suffered from mental issues.

“I do not know exactly what he has. But we are shocked when it was he who threatened policemen in Berlin. We absolutely have to ask him about it,” he said.

Berlin has seen a surge in antisemitic attacks in recent years. A report released earlier this year claimed that there had been at least 1,000 antisemitic incidents in the city in 2018.

Last month, two antisemitic Palestinian rappers were scheduled to give a concert at a pro-Palestinian rally at the Brandenburg gate.

Following an outcry from the Israeli embassy and American ambassador to Germany Richard Grenell, organisers cancelled the performance.

NOW, if history is any guide (and not the revisionist kind), this much is for sure: once a Stasi agent, always one! So while power players can, more easily, “sanitize” their ugly pasts, sooner or later they return to their roots and their cover is blown.

AND this is precisely why Germany in particular, and Europe in general (except for those in Eastern Europe who have, for the most part, learned their historical lessons), is awash with Allah’s Islamic terrorists – as they stand ready to pounce, screaming, “Allah Akbar!” By then, it is (almost always} too late. Forewarned.

EXTRAPOLATE from there. Enough said. School’s out. 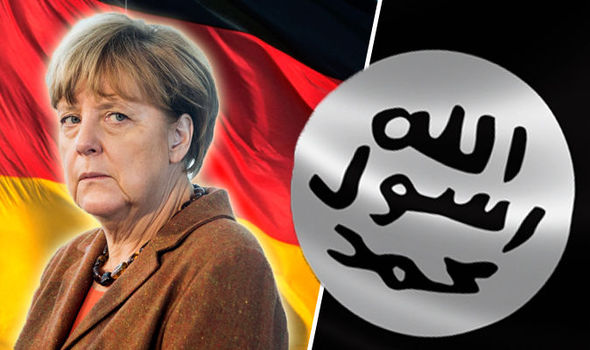