Call it part of the overall effort to foment violence against GOP nominee Donald Trump.  On Wednesday, Breitbart.com reported that the Republican candidate is beheaded in the latest issue of “Spawn Kill Everyone!”

The comic strip sees Trump standing next to character Red Skull in a stand-off with Spawn, a chain-wielding anti-hero waging a war against Satan. Spawn beheads both Trump and the Nazi villain, Then he swaps their heads, putting one on top of the other’s body.

“That’s more accurate! And Donald, you look great again! If I do say so myself,” Spawn says, according to an image of the panel obtained by Bleeding Cool. 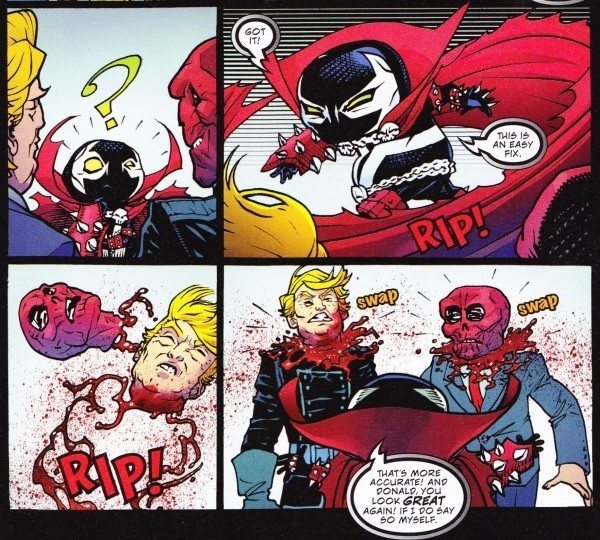 The comic, sold by Comixology, an Amazon company, says:

Do you have a favorite hero?! Better change it… they’re DEAD! If you ever wondered who the strongest hero is, THIS BOOK ANSWERS IT! It’s SPAWN… he kills EVERY HERO!

Observing that comic books “aren’t what they used to be,” Kyle Olson wrote:

Hudson said it’s not the first time Trump has been targeted in a comic book series:

In Spider-Gwen Annual #1, Trump’s faced was superimposed onto supervillain Modok or M.O.D.A.A.K. (Mental Organism Designed as America’s King), a giant-headed villain with a tiny body on a mission to rule the world.

It’s enough to make one think the creators of this comic actually want to see Trump murdered.

Exit question: Does Amazon support the idea of killing Trump?