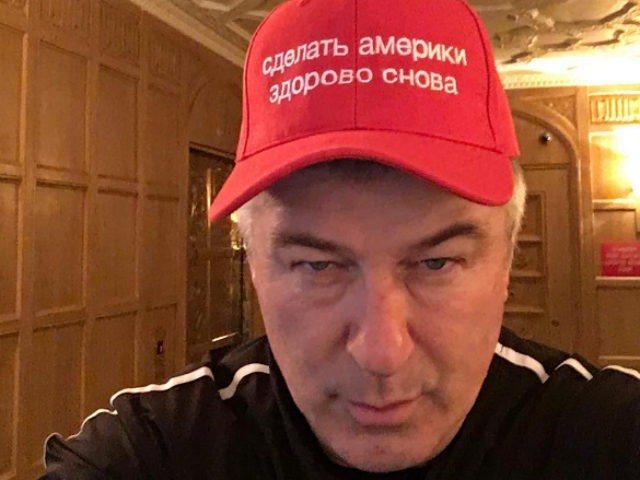 Baldwin and Trump have made their mutual dislike perfectly clear as the actor continues to mock and impersonate the president-elect on NBC. On Friday, Baldwin decided to smack Trump’s coziness with Vladimir Putin by wearing a Russian version of the mogul’s “Make America Great Again” hat.

Here’s what Roginsky said about the hat:

Sigh, Alec Baldwin… that hat is both grammatically incorrect and is more about making America groovy again. https://t.co/86xmaX6HAA

The grammatical declensions of the words are all wrong and the word for "great" is better translated as "awesome" or "groovy." https://t.co/0cYQ7wDwFt

Maybe Baldwin got stuck in the 60s…

Before she became a Democratic strategist and a regular on Fox’s Outnumbered, Roginsky spent several years of her childhood living in Moscow. This evening, Roginsky took notice of a Mediaite piece which reported on an Instagram photo of Baldwin wearing a Russian lampoon of Trump’s “Make America Great Again” hats.

Oh and it sounds like he wore the hat for a few days, which is hilarious because anyone who speaks Russian knew his hat didn’t really say what he thought it said.

Trump did not respond directly to Baldwin’s trolling, as he has in the past. When Saturday Night Live’s ratings dropped to a season low after the return of Baldwin as Donald Trump, the President-elect ripped the long-running show, calling it “unwatchable!” and “totally biased,” stating that “the Baldwin impersonation just can’t get any worse.”

Though he did not mention Baldwin’s trolling, Trump did take to Twitter early Saturday and addressed the United States’ relationship with Russia.

“Having a good relationship with Russia is a good thing, not a bad thing,” Trump wrote in a series of tweets. “Only ‘stupid’ people, or fools, would think that it is bad!”

Of course, liberal idiots like Baldwin fail to realize that stupid stunts like this are part of the reason Democrats got shellacked in November’s election.

If Netanyahu Studied Godfather Movies He Might Still Be Prime Minister
June 15th, 2021 The Lid

Biden’s longest pause yet in the middle of a statement — 10 seconds
June 15th, 2021 Liberty Unyielding
Tweets by Conservative Firing Line