(True Conservative Pundit) Funny how Dan Rather-not is out doing interviews and engaging in his usual nonsensical mudslinging – and oh by the way, he has a new book out too.

According to Breitbart News, Rather was interviewed on Morning Joe recently and said that we, as a nation have our differences, and that Trump is exploiting those differences.  Rather went on to say:

“One of the main ways it is different here in 2019 than it was during the 1960s is that we are a richer mix of religion, race, ethnicity, and that has caused a lot of fear in people. There are any number of people who say, ‘Look, it’s not the America of my grandfather and grandmother, not even the same as it was during my parents’ time.’ And it’s caused by fear. And I think this is a very important point: This fear is being exploited by any number of political leaders. [sic] including, I’m sorry to say and there’s is no joy in saying it, the president of the United States.”

This is rich coming from a former Leftist member of the mainstream media.  There is a lot of diversity in America, Rather is quite correct on that, but other than that, Rather is not only wrong, but he is in typical liberal fashion exploiting the people of our country by manipulation.  If ever there was exploitation, and there was and is – this exploitation can squarely be blamed on the mainstream media.

It is people like Dan Rather, Joe Scarborough, Mika Brzezinski, CNN’s crew, The New York Times, the hosts of The View – basically almost all of the mainstream media, that are to blame for any “fear” people in America feel.  (Related: Dan Rather: Media must shame Trump supporters)

The news no longer has much of anything to do with news.  Let me explain that – the so-called news, is all about manipulation, it’s about preying on people, it’s about propaganda, and it’s a concerted effort to brainwash people into believing exactly what the media wants you to believe.  And what does the media want you to believe?  I would need to write a book to answer that question – suffice it to say that, according to the left:

All one needs to do to see all this in action is to turn on the news, look around on the Internet and social media, and listen to the Democratic candidates for president who all promise outlandish and impossible items as they vie for the Democratic nomination.  Elizabeth Warren is a perfect example of this, my question is – exactly who is going to pay for all these freebies she wants to give away?

As for Rather’s feeble insistence that Trump is a racist hater, well if you listen to the likes of washed up fake news CNN, then yes, Trump is a hater.  If however you have a few brain cells running around inside your head, and you get your news from conservative sites like this one, then you know the truth, and the truth will set you free.

Trump wants to have a merit based immigration system (as Mexico does), and that is racist.

Trump and many others I might add want a border wall, and that is racist.

Anyone who does not agree with the LGBTQ mindset is a racist.

A pastor that actually preaches the entire Bible is, you guessed it, a racist.

If your skin color is white, you are a racist.

If you support the U.S. Constitution, you are a racist.

In fact, if you are a supporter of the Constitution, you may be considered a homegrown terrorist by the Department of Homeland Security.

Do you see how completely asinine the use of racist and racism has become?  I have even seen an article, actually many articles, that claimed that white milk is racist, yes no kidding.  A Google search on “white milk is racist,” returns over 11 million results. Uh what??? (RELATED: Liberals declare milk the new symbol of racism in Trump’s America — Video)

This really isn’t my father’s America, or anyone else’s for that matter.  This is an America I do not know or recognize.

As for Rather’s outlandish hate-on for Trump, read these words from Trump’s July 4th speech:

“‘As long as we stay true to our cause, as long as we remember our great history, as long as we never ever stop fighting for a better future, then there will be nothing that America cannot do,’ the president said.

‘The future belongs to the brave, the strong, the proud, and the free,’ Trump continued. ‘We are one people, chasing one dream, and one magnificent destiny. We all share the same heroes, the same home, the same heart, and we are all made by the same Almighty God.’”  (Source)

Sounds pretty hateful right?  How dare President Trump stand up for this country and its people, how dare trump invoke the name of God.  This author would say: how dare he not?  As much as the Leftist media and their Democratic handlers want you to believe otherwise, this country was founded by and for a moral and godly people, not a bunch of amoral interlopers bent on its annihilation.

Rather and all the rest of his Leftist cronies accusing those on the right of being hateful racists is like the pot calling the kettle black.  Those on the Left need a long and deep look in the mirror – they would see overflowing hate, dishonesty, greedy, power hungry, globalists bent on destroying the U.S.A. to further their own anti-American goals of joining the global cabal of One World government advocates – whom support eugenics, complete disarmament of the people, all forms of spying on the people, socialism, Islam, the banning of Christianity, abolishment of prisons, all open borders, and the full and complete destruction of a moral God-fearing society.

I and many others have spent innumerable amounts of time warning people – but most simply are not listening.  When people finally do decide to listen to us – it will be too late.  Just like when the people of Germany finally realized the extreme danger that Hitler presented not only to Germany, but also to the entire world, it was already far too late.

Wake up America – before it’s too late. 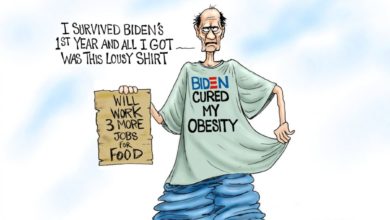 Cartoon of the Day: Bring Back Better 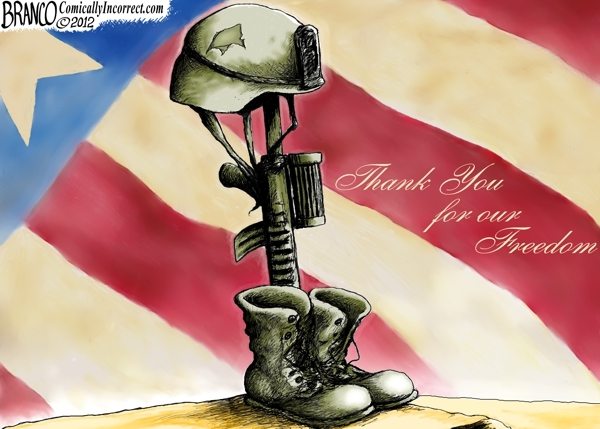 Cartoon of the Day: Remembering on Memorial Day