Montgomery County, Maryland – A pro-gun software developer killed on March 12 was Duncan Socrates Lemp, 21. He was shot to death in his home during a SWAT raid on March 12. The police narrative on the incident states that he “confronted” police with a gun, so they shot him. Witnesses say something entirely different, and state that he was asleep in his own bed at the time he was shot from outside the home. His girlfriend, who was reportedly in bed with him, was also wounded.

According to the Montgomery County Police,

On March 12, 2020, detectives from the Montgomery County Department of Police, with the assistance of the Special Operations Division – Tactical Unit, served a high-risk search warrant at a residence located in the 12200 block of St. James Road in Potomac, Maryland.

The search warrant was related to an investigation into a suspect identified as Duncan Socrates Lemp, age 21, of the 12200 block of St. James Road in Potomac, Maryland.

Detectives assigned to the Investigative Services Bureau received an anonymous tip at the beginning of the year, indicating that Lemp was in possession of firearms. Due to his criminal history as a juvenile, Lemp was prohibited from legally possessing or purchasing firearms in the State of Maryland until the age of 30. During their investigation, detectives learned of a number of firearms that Lemp was in possession of, to include various rifles and handguns that would ultimately be recovered from the residence. Detectives applied for and received a no-knock search warrant for the crimes of possession of an assault weapon and possession of a firearm by a prohibited person.

The search warrant on March 12, 2020, was served in the early morning hours, consistent with Montgomery County Department of Police practice. The officers entering the residence announced themselves as police and that they were serving a search warrant. Officers gave commands for individuals inside the residence to show their hands and to get on the ground. Upon making contact with Lemp, officers identified themselves as the police and gave him multiple orders to show his hands and comply with the officer’s commands to get on the ground. Lemp refused to comply with the officer’s commands and proceeded towards the interior bedroom door where other officers were located. Upon entrance by officers into Lemp’s bedroom, Lemp was found to be in possession of a rifle and was located directly in front of the interior bedroom entrance door.

During the service of the search warrant a device was discovered affixed to the inside frame of the exterior door leading to Lemp’s bedroom. Montgomery County Fire Marshals responded in order to render the device safe. The device was designed as a “booby trap” intended to detonate a shotgun shell at the direction of anyone entering through the exterior door into Lemp’s bedroom.  After officers entered the bedroom, the other occupant of the room warned the officers to be careful of the device rigged to the exterior door.  Statements from other occupants of the residence indicated they were aware of the dangerous device on the door.

Further statements from the other occupant in Lemp’s bedroom indicated that he slept with the rifle each night. Contrary to some information reported to the media, the same occupant also indicated that Lemp was out of the bed and standing directly in front of the interior bedroom door at the time the officers made entry into the bedroom.

Items collected from the residence included three rifles and two handguns as well as other items of evidentiary value.

This remains an ongoing investigation by the Major Crimes Division.

Software developer killed – who is telling the truth?

The weapons police reportedly recovered in the raid at the home of the software developer killed (All photos via Montgomery County public press release): 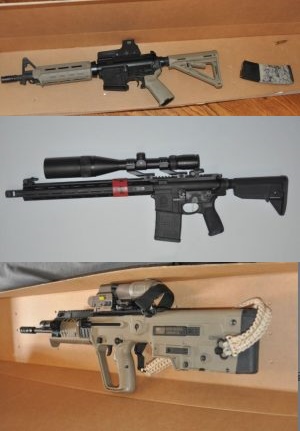 According to news reports, the officers involved were all wearing bodycams. The attorney for the Lemp family is demanding that the footage be released, since they may show the incident according to the family’s belief.

The crux of the matter is whether the SWAT action was justified. Did he, as police claim, confront the SWAT officers with a gun? Or was he shot while asleep in his bed, having no idea of the presence of SWAT there to serve a search warrant? Did the police actually identify themselves, or did they serve the “high risk” warrant as normal units would tend to do – without knocking first.

The Attorney for the family, Rene Sandler, stated that the circumstances surrounding this shooting were extremely “disturbing.” But at this point, we have a he said/she said situation. Until the bodycam footage is released (unless it conveniently becomes “lost”) we won’t know for certain whose version is the truth.

“There is no warrant or other justification that would ever allow for that unless there is an imminent threat, which there was not.” Rene Sandler to the AP

“Tsolmondorj Natsagdorj, 24, of Fairfax, Virginia, said he met Lemp in 2016 and bonded with him over their shared interest in cryptocurrency. They also talked about politics. He described Lemp as a libertarian who frequented the 4chan and Reddit message boards, sites popular with internet trolls.

“Duncan was a young guy with a bright future as an entrepreneur,” Natsagdorj said. “He was working on things to change the world.”

On social media accounts that friends said belonged to him, Lemp’s username was “YungQuant”. On an internet forum called “My Militia”, someone who identified himself as Duncan Lemp, of Potomac, and posted under the username “yungquant” said he was “an active III%’r and looking for local members & recruits”.

Lemp’s Instagram account reportedly had a post that referenced “boogaloo,” which tends to freak out people who don’t comprehend that sort of thing. Most articles called the sites he frequented “extremist.” His friends specifically stated he had never said anything against the US government, and was pro-America and the Constitution.

The Howard County Prosecutor will be investigating this incident rather than Montgomery County, according to standard protocol.