Two measures to end the shutdown failed in the Senate because they didn’t reach the required 60 vote threshold. The Republican bill failed  50-47, and the Democrat bill failed 52-44. The President and Senate leadership are working on ways to find a solution.

Republican Senator Mitch McConnell worked on the President’s offer of a 3 year extension for DACA and TPS recipients. It included the $5 Billion for a barrier at the Southern border. McConnell has been reluctant to engage the “nuclear option” for these kind of situations and the vote count reveals why.

Democrat Senator Chuck Schumer put forth his version, which did not include funds for a wall, that would have re-opened the government only until February 8. Not a feasible solution. The nuclear option would have seen their version pass, which is only a temporary solution, and they’d be back to square one on February 9.

Gridlock has occurred in the Congress previously, but never to this extent. The shutdown has gone on now for over a month, with Federal employees and the Coast Guard missing paychecks that have placed all of them in financial jeopardy.

The president today began offering a deal for a partial down payment on the wall, according to Fox. House Speaker Nancy Pelosi once again stated that the offer was a “non-starter.”

Leader Mitch McConnell and Senator Chuck Schumer are meeting now to see whether or not they can work out of the deadlock,” White House Press Secretary Sarah Sanders said Thursday evening. “As was made clear to Senator Lindsey Graham, the three-week CR [continuing resolution] would only work if there is a large down payment on the wall.”

Trump, in separate comments to reporters at the White House, suggested that a “prorated down payment” on the wall, also without providing a concrete dollar figure, could be viable.

“If they come to a reasonable agreement, I would support that,” Trump told reporters, referring to Schumer and McConnell.

Schumer and  Pelosi remain incredibly hardened over the barrier issue. But they are missing the average American’s viewpoint. And they don’t care.

The Republican National Hispanic Assembly believes it’s a matter of national security to build the barrier. 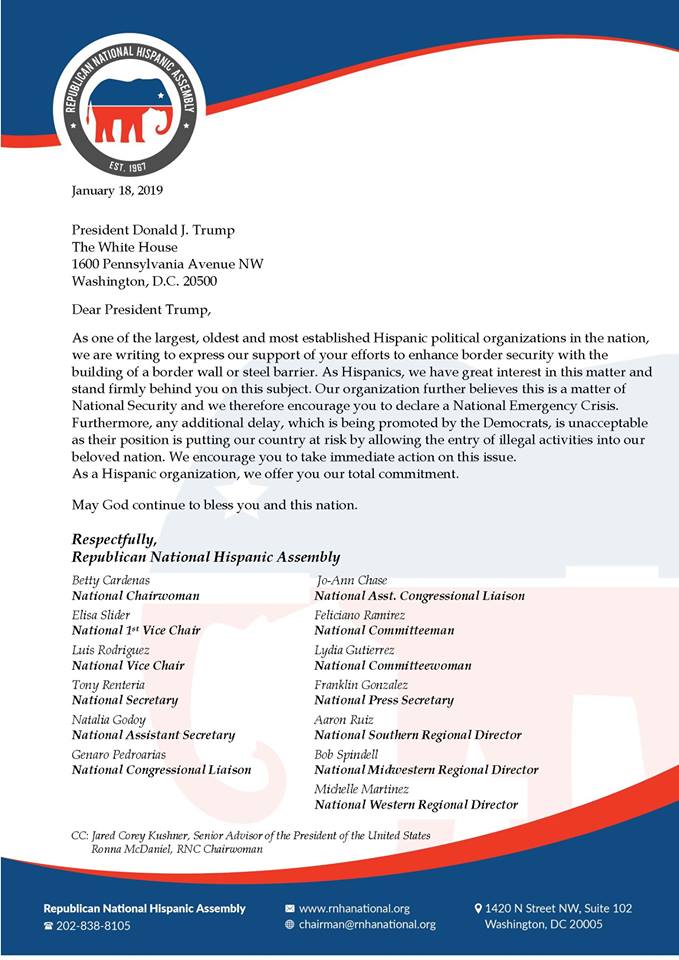 “After many requests on our stance about the wall, we have decided to release our endorsement to the public. We view our support to any issue with great care, seriousness, and thoughtfulness, so, after all the media efforts of the negative rhetoric, trying to portray that the Hispanic community is against the wall, the RNHA answered back sending an official endorsement to our President. This endorsement comes after several meetings with our board members. The RNHA understands implementing the wall along the southern border is an act of security for all. God Bless America.” Republican National Hispanic Assembly

Trump  made an offer that all of us can live with- not “amnesty” which would increase illegal migration.  Will anyone finally listen?