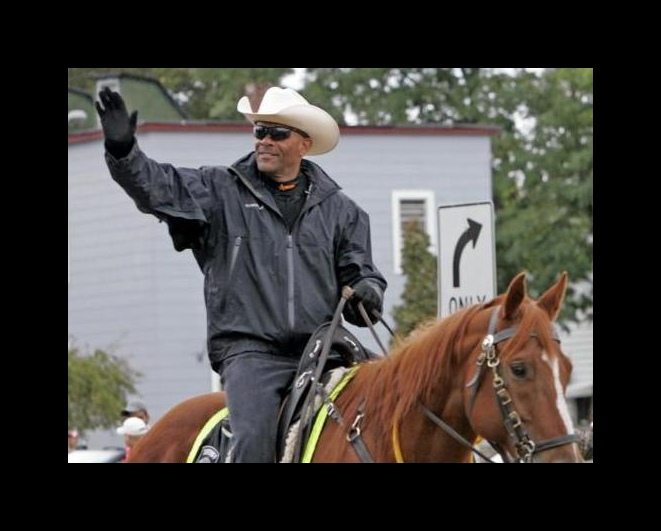 Sheriff David Clarke, one of the Second Amendment’s biggest supporters, has accepted a position with the Department of Homeland Security- a position appointed by DHS Secretary John Kelly. He will begin his new job in June. He will be coordinating outreaches to state, local and tribal law enforcement. The DHS isn’t talking…but the left wingers are blabbing.

“The position mentioned is a Secretarial appointment. Such senior positions are announced by the Department when made official by the Secretary.  No such announcement with regard to the Office of Public Engagement has been made.” Department of Homeland Security

Sheriff Clarke himself confirmed the appointment as a law enforcement liaison to the DHS Office of Partnership and Programs on a radio show this morning:

“I’m both honored and humbled to be a appointed to this position by [DHS Sec. John Kelly], working for the Trump administration in this position.” Sheriff David Clarke.

But in usual leftist fashion, the left is trying to destroy him and have been for some time. Now they appear to be trying to derail his appointment to the position before it’s even been announced.

In 2016, Milwaukee jail guards allegedly cut off water for 7 days to a mentally ill inmate named Terrill Thomas who had been placed in solitary confinement or being “too noisy.” When guards went to check on him, they found him dead on the cement floor.

A jury found probable cause to indict several guards for the death. What should have been a simple drug treatment ended in torture, as the guards allegedly even cut off the pipes to the sink and toilet in his cell, as well as fed him “nutraloaf” which is hard brick of mashed up combination of ingredients than can include chickpeas, minced meat, and applesauce (among other things).

The prosecutor’s office began an “inquest.” And the left has been having a field day with the Sheriff changing jobs.

The only people that will be more secure from this appointment are the pisoners in Wisconsin. #HeadDesk https://t.co/hNBec9kJYl

Don’t put him in charge of any detention facilities. People might die. https://t.co/yLq17YL8du

Let’s be clear on this: David Clarke is egregious, with a serious prisoner abuse scandal in bckgrnd + a nasty authoritarian attitude. https://t.co/W0LdykTh13

Sheriff Clarke is well known as an NRA/Second Amendment advocate. But does he have a “nasty authoritarian attitude?”  Liberals are about to go nuts with this new appointment. His signature cowboy hat and tough stance on crime is an excellent background for the position at the DHS. He exudes confidence and common sense when he speaks, and is often a Fox Contributor. He has been re-elected 3 times after being appointed to the Sheriff’s position by then governor of Wisconsin. He has been a popular Sheriff…except for the left.

Oh, did we mention he’s been a staunch Trump Supporter?  Yes, that too.