Liberalism, as I’ve said repeatedly since February 2011, is an ideology of insane rage and hate.  Sadly, liberals prove that assertion correct on just about any given day.  Consider, for example, the reaction a number of people had to the season premier of ABC’s “Scandal.”  On Friday, Newsbusters reported that a number of people expressed a desire to see President Trump assassinated after watching the program.

To accommodate lead actress Kerry Washington’s pregnancy, the premiere moved from its usual fall date to a January 2017 start even though it was filmed in July 2016. In fact, the premiere was bumped back another week when ABC decided it wanted to air a special on President-elect Trump the night before his inauguration instead. Considering the content of the premiere, this was a wise move.

The episode “Survival of the Fittest,” begins with Mellie narrowly losing to Frankie, breaking liberal feminist hearts all over again with the sight of another woman conceding an election, but the drama really kicks up when President-elect Vargas is assassinated while giving his acceptance speech. Immediately after it was announced that Vargas had been killed, there was an explosion of tweets from the nastier parts of Twitter wishing it had been Trump.

Here’s some of the tweets captured by Newsbusters: 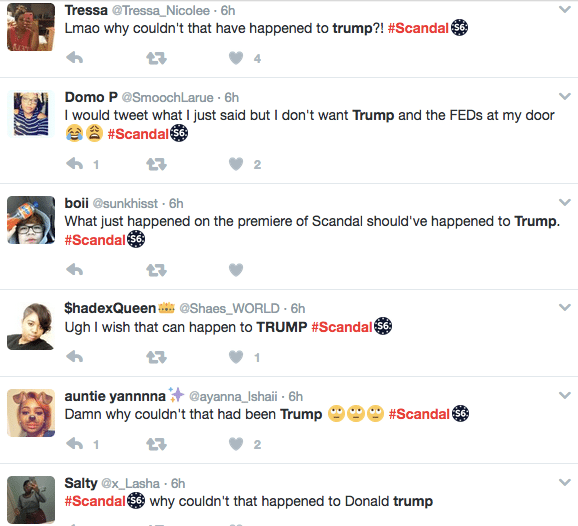 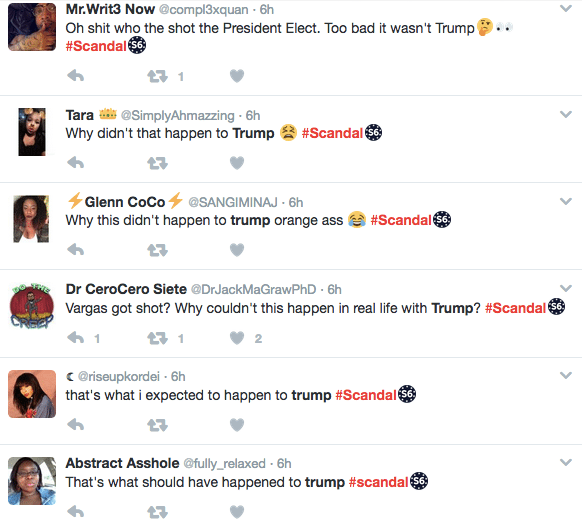 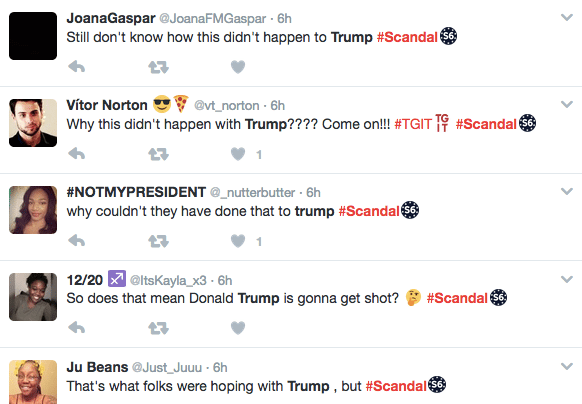 Did Shonda write this episode to show what she wanted to happen to Trump. ???? Trump will be tweeting soon about this. #Scandal

So the president elect for shot in the first hour of his winning yet trump is still alive. I think Shonda is telling us something #Scandal

Showrunner Shonda Rhimes as well as the other actors went on record to insist that the real life election had nothing to do with the episode, but it’s still worth noting that many key figures from Shondaland publicly supported Hillary Clinton in the election and went so far as to film an ad for her campaign. And of course there was the despicable Trump-like character from last season. The show can’t seem to escape even subtle references, whether it be Mellie’s logo resembling Hillary’s or the prophetic comment on a woman losing the election.

“With Scandal‘s long history of supporting leftist causes, it’s no wonder so many of its fans are members of the deranged left who wish our president dead,” they said.