James O’Keefe and his Project Veritas released Part I of the newest round of undercover videos – this time on Bernie Sanders. In a crass, disgusting display of left-wing thought, Bernie Sanders Field Organizer says that we who support Trump, as well as billionaires, should end up in Gulags and be re-educated. Every other word was f*** this and f*** that, not to mention an inability to speak properly by using “like” almost as many times. 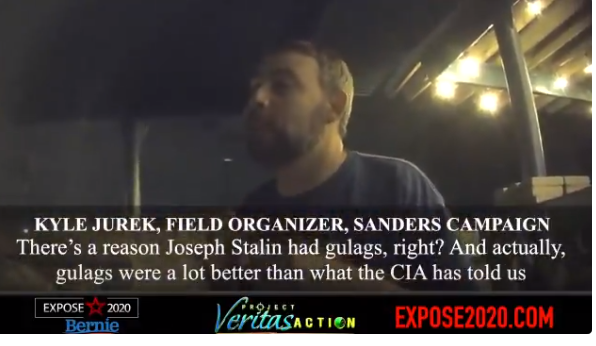 Since this bearded soy-boy has never actually cracked open a history book to even know what Gulags really were, his statements are irrelevant to the real world.  There’s probably some ignorant leftists who will believe him. But he definitely should be fired. With friends like that, who needs enemies?

“Germany had to spend billions of dollars re-educating their fucking people to not be Nazis. We’re probably going to have to do the same fucking thing here… That’s kind of what all Bernie’s whole fucking like, ‘hey, free education for everybody’ because we’re going to have to teach you to not be a fucking Nazi.” Kyle Jurek

“People were actually paid a living wage in the gulags. They have conjugal visits in gulags. Gulags were meant for re-education.” Kyle Jurek

“[The] greatest way to break a fucking billionaire of their privilege and their idea that they’re superior, go and break rocks for 12 hours a day. You’re now a working class person, and you’re going to fucking learn what the means, right?” Kyle Jurek

(reveals hatred of anyone he doesn’t agree with)

He is completely ignorant about the Stalinist regime, the Nazis, and the gulags. Maybe he should read “The Gulag Archipelago” by Aleksandr Solzhenitsyn. If he can actually read, that is. Which is doubtful based on his vocabulary.

Then… the threats from Sanders field organizer

Later in the Project Veritas video he goes on a rant about what’s going to happen if Bernie Sanders doesn’t get the nomination.

The video also shows Jurek warning that Milwaukee, host of this year’s Democratic National Convention, will “burn” if Sanders fails to win the party’s nomination. “If Bernie doesn’t get the nomination or it goes to a second round at the DNC convention, fucking Milwaukee will burn,” says Jurek. “It’ll start in Milwaukee and then when the police push back on that, other sites will fucking [explode].”

The footage concludes with Jurek issuing the chilling prediction that Milwaukee could see riots akin to the 1968 convention in Chicago, where left-wing activists engaged in violent riots in the streets. “Be ready to be in Milwaukee for the DNC convention. We’re going to make [1968] look like a fucking girl’s scout fucking cookout,” warns the Sanders field organizer. “The cops are going to be the ones fucking beaten in Milwaukee.”

Threats of violence against Trump supporters…and all billionaires, plus the tantrum if they don’t get their way. Just what Sanders needs now. He’s leftist enough to make all of us cringe. But the Sanders Field Organizer….he’s off the charts in mind-numbing stupidity.

If Not Hillary Then Who: The Truth Exposed – Part 2