The College watchdog group Campus Reform is reporting that San Diego State University has created a one-credit course with a singular purpose: to discuss the impeachment of Donald Trump. There are no rebuttal classes. 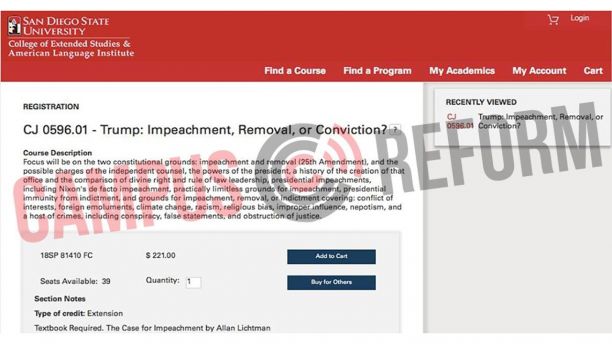 CJ 0596.01 has a sole focus: “Focus will be on the two constitutional grounds: impeachment and removal (25th Amendment), and the possible charges of the independent counsel, the powers of the president,” and “a history of the creation of [the presidency] and the comparison of divine right and rule of law leadership.”

The class will also address: “grounds for impeachment, removal, or indictment,” such as “conflict of interests, foreign emoluments, climate change, racism, religious bias, improper influence, nepotism, and a host of crimes, including conspiracy, false statements, and obstruction of justice.”

The class has just one required reading: The Case for Impeachment by Allan Lichtman. It will be taught by Professor John Joseph Cleary for $221 in the University’s Criminal Justice Program.

Lichtman’s opinion in the book is a classic liberal anti-Trump viewpoint that has no basis in fact. The truth is, Barack Obama fits those parts of his diatribe better.

“Trump’s penchant for lying, disregard for the law, and conflicts of interests are lifelong habits that will permeate his entire presidency. He has a history of mistreating women and covering up his misdeeds. He could commit his crime against humanity, not directly through war, but indirectly by reversing the battle against catastrophic climate change, upon which humanity’s well-being will likely depend. His dubious connections to Russia could open him to a charge of treason. His disdain for constitutional restraints could lead to abuses of power that forfeit the trust of even a Republican Congress.” Allan Lichtman

He put “climate change” in that rambling opinion nest? Seriously? And there has been ZERO evidence of Russian collusion on the part of this President. The only people with real collusion were members of the Obama administration and the DNC who actively allowed Russia buy up parts of our Uranium and worked with them to create a fake dossier designed to take down the candidacy of Trump. And they did it with subterfuge, attempting to hide it every step of the way.

The above class at SDSU is set for March.