Regular readers of this site, and listeners to my radio show, know I love to read anything written by Kurt Schlichter. He provides answers to political questions that most of us didn’t even know to ask. And his answers are usually filled with a piping-hot serving of biting snark. Kurt’s next book, The 21 Biggest Lies About Donald Trump (And You!), will be published on July 7th, but pre-orders are available right now.

In this incredibly stupid year, when the China Virus is driving us nuts because we’ve been forced to stay in our homes, The 21 Biggest Lies About Donald Trump (And You!) is the perfect life preserver–in book form. It even comes complete with a special bonus–lies about the pangolin pandemic.

Now more than ever, we’ve got to open our eyes to the lies, and lies are all we get from our garbage media, scumbag politicians, and halfwits celebrities. 21 Biggest Lies is a handbook for detecting deceit and fighting back! It’s funny, it’s mean, and it’s everything you expect a Kurt Schlichter book to be, including not safe for work.

Think about it…Has any president been more unjustly vilified than Donald Trump? When they lie about him, they’re really lying about you, because to the media, anyone who supports Donald Trump is deplorable.

But here, at last, is the counterpunch we’ve been waiting for for…and Kurt Schlichter is the perfect snarky man to provide it.

In The 21 Biggest Lies about Donald Trump (and you!), Columnist and bestselling author Kurt Schlichter provides a fact-filled—and frequently hilarious—takedown of some of the media’s most pernicious lies about the president.

When you read the book you’ll learn:

And there’s much, much more.

If you are tired of media and leftwing lies about Donald Trump and his supporters? Then you’ll love this book.

BTW did you know that Kurt scheduled the release of the book on July 7th  because it was the day before my birthday–Neither did Kurt.

He also didn’t know that one of the ways I plan to celebrate my special day is reading his new tome, The 21 Biggest Lies About Donald Trump (And You!) so I can learn how to fight the fake media, lying politicians, and celebrities who demand rose pedals in their dressing room toilets who believe they know how real people live.

Why don’t you celebrate with me? Pre-order your copy of The 21 Biggest Lies About Donald Trump (And You!).

Note: While we are all suffering a bit from Wuhan Virus cabin fever, Kurt assures me that no cabins were hurt in the writing of The 21 Biggest Lies About Donald Trump (And You!) 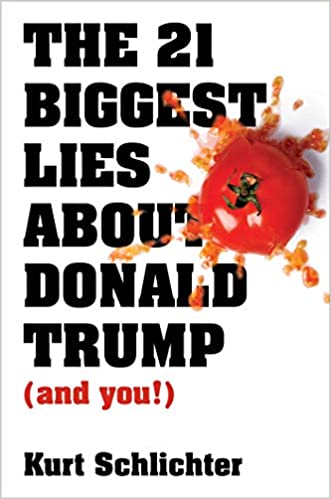