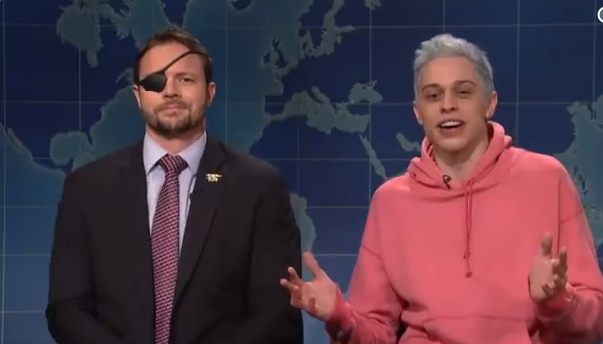 Crenshaw took the opportunity to take some shots at Davidson:

“This is Pete Davidson. He looks like if the meth from ‘Breaking Bad’ was a person…He looks like a troll doll with a tapeworm… He looks like Martin Short in ‘The Santa Clause 3.’ By the way, one of these people was actually good on ‘SNL.'” Dan Crenshaw’s revenge moment

“In what I’m sure was a huge shock for people who know me, I made a poor choice last week. I made a joke about Lieutenant Commander Dan Crenshaw, and on behalf of the show and myself, I apologize. I mean this from the bottom of my heart. It was a poor choice of words. The man is a war hero and he deserves all of the respect in the world. And if any good came of this, maybe it was that for one day the left and the right finally came together to agree on something: that I’m a d—. ” Pete Davidson via Fox News

Was it real? Yes. We learned from the episode with Rep-Elect Crenshaw that Davidson’s father was Scott Davidson, one of the New York firefighters lost in the 9/11 twin towers attack. His father was a hero. Crenshaw brought that home to the SNL comedian.

“There’s a lot of lessons to learn here. Not just that the left and the right can still agree on some things, but also this: Americans can forgive one another. We can remember what brings us together as a country and still see the good in each other. This is Veterans Day weekend, which means that it’s a good time for every American to connect with a veteran…And never forget those we lost on 9/11, heroes like Pete’s father. So I’ll just say, Pete, never forget.” Dan Crenshaw via Breitbart

It’s a principle that every American needs to live by- that forgiveness makes a difference. And Dan Crenshaw was a giant example of how it works. He got a little revenge, but he healed a rift, and brought some conviction to Davidson’s heart. It may not change everything about the SNL comedian or his political views, but it made an impression.