As we and others reported, Antifa insurrectionists have essentially seceded from the Union and have formed what amounts to a separate “country” of sorts in Seattle’s Capitol Hill area.  Naturally, city authorities have retreated out of the area, leaving a vacuum.  That vacuum appears to have been filled by a Soundcloud rapper going by the name of Raz Simone, according to various reports.

RedState tells us that Simone is now the “de facto ruler” of the so-called autonomous zone.  And from what we have seen, he’s not exactly a nice guy.

A SoundCloud rapper becoming the warlord in an Antifa insurgency-controlled autonomous zone in Seattle is proof we live in a simulation. pic.twitter.com/E15y65kj7K

Raz Simone, a Seattle local, stated he belongs to the “People’s Force,” a replacement for Seattle PD in #FreeCapitolHill. On June 8th in a live video he advised that unfamiliar faces should be stopped, questioned, and checked to see if they’re armed, similar to “Stop and Frisk.” pic.twitter.com/QsM5YR0xuW

As you can see in the video below, it appears he’s not beneath using a bit of thuggery to get his way:

A Seattle local named Raz Simone established himself and his crew as the police of the Capitol Hill Autonomous Zone. He's a warlord, and his crew is assaulting anyone who steps out of line.

Unlike real police, there's no accountability or discipline. It's just violence. pic.twitter.com/196ZiN2Ihh

So it’s basically just Lord of the Flies

It pretty much seems that way.

Sean Davis minces no words describing what this really is:

And of course, we’re not surprised to hear this:

Sources tell me there are those in the #CapitalHillAutonomousZone who are “shaking down” businesses by asking them to contribute supplies or resources. When there was the occupation in Portland in 2018, they threatened a food cart that wouldn’t give them electricity access.

Meanwhile, Jay Inslee, the Democrat governor of Washington state, admitted he has no clue what’s going on in the state’s largest city:

"That's news to me". pic.twitter.com/L3LT86Zxgq

Here’s how that went:

Q: Governor, I’d like to ask you about what’s going on in Seattle. There’s this thing called the Capitol Hill Autonomous Zone. What’s your thought on that — the fact that the protesters have taken that over, and not allowing people to come and go freely? …

A: Well, that’s news to me. So I’ll have to reserve any comment about it. I have not heard anything about that from any credible source. [Laughs] Not that you’re not credible, it’s just that I — before I espouse an opinion, I should know of which I speak. [Laughs]

We’re not too surprised that Inslee’s clueless, since, as Newsbusters reported, propagandists in the liberal media have largely ignored the whole brouhaha:

Republicans in the state aren’t too thrilled:

.@GovInslee is acting like he didn’t know protesters had taken over city hall and declared a “Capitol Hill Autonomous Zone” but…

Of course, both Inslee and Seattle Mayor Jenny Durkin have given the president the middle finger:

Make us all safe. Go back to your bunker. #BlackLivesMatter https://t.co/H3TXduhlY4

A man who is totally incapable of governing should stay out of Washington state’s business. “Stoop” tweeting. https://t.co/O6i04qmZ9v

Okay, so Trump did tweet a typo.  Big deal.  At least he knows what’s going on in Washington, which is more than Inslee can say.  And for the record, when lawless thugs engage in what amounts to a rebellion against the United States, that happens to be the president’s business…

The President really put a hit on my head. I’m not a Terrorist Warlord. Quit spreading that false narrative. The world has NEVER been ready for a strong black man. We have been peaceful and nothing else. If I die don’t let it be in vain. pic.twitter.com/HSEs5C2QRv

What?  Has this guy never heard of Dr. Martin Luther King Jr.?  And has he not kept up with current events?  Give us a break… 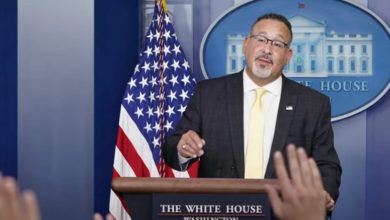