On Saturday, a short report at New York Superstation95 said CBS News reporter Hannah Chanpong tweeted a message saying that Clinton campaign staff members are resigning apparently over worries that the Democratic Party presidential nominee may drop out of the race after Friday’s FBI data dump.  The tweet was quickly deleted but not before being captured for posterity: 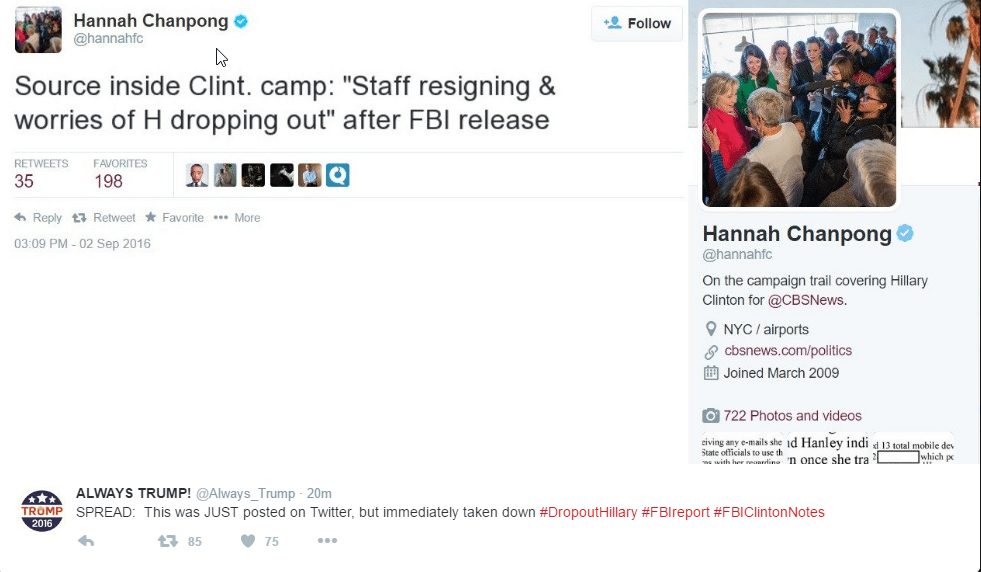 The fact that an accredited political reporter from one of America’s largest news organizations would Tweet this is nothing short of STUNNING.   The fact it was quickly DELETED makes the information all-the-more believable.

According to that data dump, Clinton repeatedly said she couldn’t recall security briefings due a concussion she suffered in 2012.

Said the report, “Clinton said she received no instructions or direction regarding the preservation or production of records from (the) State (Department) during the transition out of her role as Secretary of State in 2013.

“However, in December of 2012, Clinton suffered a concussion and then around the New Year had a blood clot (in her head). Based on her doctor’s advice, she could only work at State for a few hours a day and could not recall every briefing she received,” the report said.

According to the report, Clinton told the FBI that she did not set up a private email server to sidestep the law requiring her to keep her business communications a matter of public record.

Mediaite posted the 40 times Clinton told the FBI she couldn’t remember something.  Some of those instances included:

“Clinton did not recall a State policy on confirming classified information and media reports.”

“Some aides had access to Clinton’s BlackBerry and email accounts, but she could not recall specifically who had access.”

“Clinton could not recall when she first received her security clearance and if she carried it with her to State via reciprocity from her time in the Senate.”

Clinton ‘stated she did not know what the (C) meant at the beginnings of the paragraphs and speculated it was referencing paragraphs marked in alphabetical order,’ according to the documents.

The FBI documents state that on February 9, 2016, the Justice Department asked Clinton’s lawyers at Williams & Connelly to turn over the 13 mobile devices she used over the time period.

The lawyers couldn’t locate any of them, and the FBI was ‘unable to acquire or forensically examine any of these 13 mobile devices.’

More and more, it looks as though Hillary Clinton, perhaps the most evil person ever nominated to the White House by a major political party, is not fit to serve as President of the United States.