House Speaker Nancy Pelosi had to know that putting an anti-Semite who actually hates America on the Foreign Affairs Committee was a bad idea. Rep Ilhan Oman “attacked” Venezuelan envoy Elliott Abrams, demanding to know whether if “a genocide will take place and you will look the other way because American interests were being upheld.” 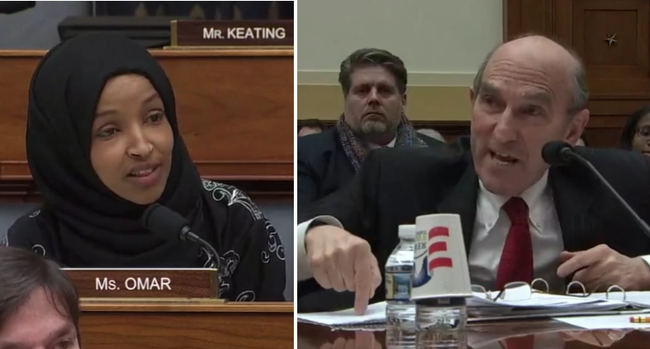 Abrams refused to answer the question, calling the line of questioning “ridiculous.”

“That is a ridiculous question,” Abrams responded when Omar asked him if he thought the massacre was a “fabulous achievement.” “I am sorry, but I am not going to respond to that kind of an attack.”

Omar then asked if he would “support crimes against humanity or genocide if you believe they were serving U.S. interests as you did in Guatemala, El Salvador and Nicaragua.” Abrams in the past had defended Guatemalan dictator Efraín Ríos Montt, who oversaw a campaign in which thousands of Guatemalans were either massacred or disappeared and who was later convicted of genocide. Omar, though, has also faced criticism for challenging the U.S. policy in Venezuela, and her questions appeared to suggest active U.S. opposition to Maduro, who has overseen a complete economic collapse in Venezuela, could spiral into “genocide.”

Abrams responded: “I don’t believe this line of questioning is meant to be real questions and so I will not reply.”

Omar then said she wanted to know whether “a genocide will take place and you will look the other way because American interests were being upheld.” Abrams said the American policy in Venezuela is to support the Venezuelan people’s effort to restore democracy.

The US has chosen, along with numerous other nations, to back Juan Guaido as the legitimate president of Venezuela, as we have previously reported. Nicholas Maduro is a Socialist dictator that has ravaged the nation, leaving its people in horrific conditions. Omar wants to talk about massacres, but doesn’t want to talk about Venezuelans who are suffering tremendously in a government that is killing them from malnutrition, disease, and poverty.

That’s the genocide. It has nothing to do with the United States- it has to do with a Venezuelan dictator.