On Tuesday, Shad Moss, the rapper who goes by the name “Bow Wow,” responded to President Trump’s tweet calling out a video in which rapper Snoop Dogg “shot” a clown version of the chief executive by threatening to “pimp” First Lady Melania Trump.

Can you imagine what the outcry would be if @SnoopDogg, failing career and all, had aimed and fired the gun at President Obama? Jail time!

Bow Wow responded with this tweet, which has since been deleted: 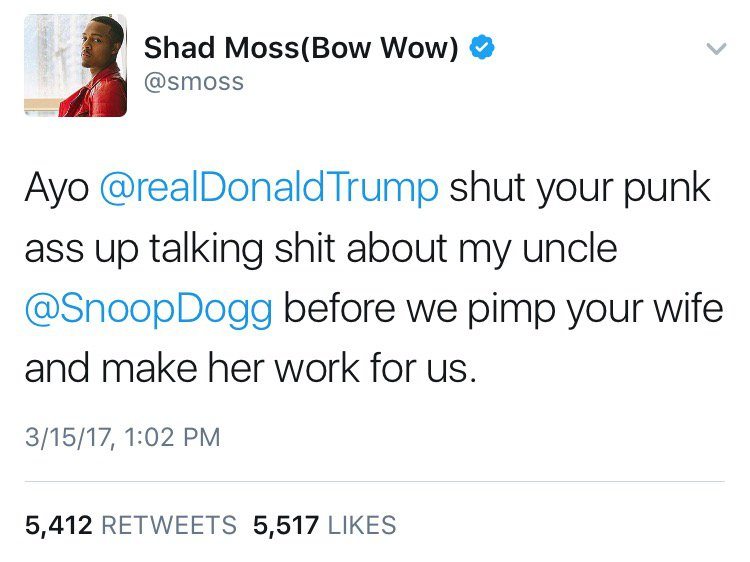 I think the First Lady of the United States of America is about ten leagues out of your league, bro. pic.twitter.com/6jXBLzZ641

Are all the feminists outraged over "grab her by the pussy" bothered by this?

Or are rape threats against Republican women acceptable? https://t.co/wpPKTlDDuD

An article at the Mercury News observes:

His tweet crossed several important lines. First it implied a certain attitude among rich, powerful, arrogant and misogynist men. It is that women only exist to serve them and as their property — that these men are entitled to force women to do what they want, including forcing them to engage in prostitution.

In bringing up the prostitution idea, Bow Wow also intentionally, or not, made reference to false allegations that came up during Trump’s 2016 campaign. A blogger and the British tabloid Daily Mail alleged Melania had once worked as a escort. Both later retracted the allegations when facing legal action for libel.

Last month, the first lady generated headlines about the escort allegations when she filed a libel suit against against Mail Media, the owner of the Daily Mail. She said its article with the allegations had hurt her reputation and caused her brand to lose “significant value” as well as “major business opportunities” that were available to her as first lady. Her suit said the article had damaged her “unique, once in a lifetime opportunity” to “launch a broad-based commercial brand.”

The Mercury News also said Bow Wow has “also opened himself to some kind of legal action by Melania,” and warned that the rapper had “better watch out. Her attorney in the libel action is Charles Harder, the Los Angeles-area lawyer who helped win wrestler Hulk Hogan, $140 million in an invasion of privacy lawsuit against the website Gawker.”

As we’ve observed many times since February 2011, liberalism, at its core, is an ideology of rage and hate.  Sadly, liberals prove that assertion correct on just about any given day.