Joe Biden largely stayed out of view during much of the 2020 presidential campaign. Of course it was COVID season but he hunkered down in his home and stayed there for extended periods of time.

He did make video appearances occasionally.

But now a sitting U.S. senator says it would be good for the country for him to return to that, absent the random video appearances of course.

Sen. Rand Paul, R-Ky., was being interviewed on Hugh Hewitt’s radio show when he was asked about Biden’s nearly two-hour press conference on Wednesday, specifically Biden’s suggestion that a “minor” incursion by Russia into Ukraine wasn’t something to worry about.

He explained he thought, “You know, it’s rambling and disjointed enough that it’s really hard to get a coherent message out of it. I think really for the good of the country because the thing about foreign policy, as I know you know, is there are things you say. There are things you do to try to influence other countries. And they are influenced by your public pronouncements. And in some ways, that’s all you have. You have the threat of military might, but you also have the influence of what you say.”

He continued, “So you can’t be sending a muddled message or a message of well, it may not be too big a deal, you know, if there’s a Russian incursion. So I think that it’s a mistake for him to be out in front. It’s dangerous to the country. And I think we’re stuck with him, in all likelihood, until 2024.

“And I think it would be good for the country for him not to speak and not to appear in public,” he said.

The comments start at about 8:30 of the video:

Among Biden’s comments that created wildly unnecessary issues on Wednesday was his reference to a “minor” incursion by Russia into Ukraine.

Biden was upbraided immediately on Thursday by Ukrainian President Volodymyr Zelensky, who said, “We want to remind the great powers that there are no minor incursions and small nations. Just as there are no minor casualties and little grief from the loss of loved ones. I say this as the president of a great power.”

Biden had said the U.S. would hold Russian President Vladimir Putin accountable if Russia invades Ukraine but, USA Today reported, he suggested the consequences would depend on the extent of Russia’s aggression toward its neighbor.

“It depends on what (Russia) does. It’s one thing if it’s a minor incursion and we end up having to fight about we have to do and not do,” Biden said.

Republican lawmakers called him out for the comments and the White House struggled to backtrack.

Thursday, Biden himself had to clarify: “If any assembled Russian units move across the Ukrainian border, that is an invasion. Let there be no doubt if Putin makes this choice, Russia will pay a heavy price.”

The report explained the GOP considered Biden’s comments “deeply problematic and could be seen by Putin as a free pass to invade Ukraine.”

“Biden’s remarks on Russia’s buildup near Ukraine tonight were nothing short of a disaster,” Rep. Michael McCaul, R-Texas, said. “He shared the potential disunity of Western nations on tough sanctions and clearly gave Vladimir Putin the green light to launch a ‘minor incursion’.”

Further, Biden also undermined the coming 2022 elections – because the Senate refused to approve his Democrat Party proposal that the federal government take over all elections and eliminate local voter ID and other election integrity measures.

The Washington Examiner said Biden warned that the elections could be “illegitimate.”

It was those kinds of references, however, by Republicans after the 2020 race that saw the Democrats condemn them for being “insurrectionists.”

The Examiner explained “After more than a year of combating claims by former President Donald Trump and his allies that the 2020 presidential election was stolen due to rampant fraud and irregularities, Biden stirred up fresh controversy with his rambling response to a reporter asking him to clarify his characterization that red states making reforms to their election protocols poses a threat to democracy.”

Biden was stumbling through his words when he responded to a reporter questioning the election with the comment, “Oh, yeah, I think it could easily be illegitimate.”

The report said political foes slammed Biden for the statement that he believes there could be trouble during the midterms without the Democrat elections takeover agenda being adopted.

“Joe Biden dangerously claiming results of 2022 elections will be illegitimate unless Congress passes his election power grab” tweeted Sen. Josh Hawley, a Republican from Missouri who objected to some of the electoral votes in the 2020 election.

“Is he just confused or is he saying elections aren’t legitimate? Asking for a friend,” said Rep. Nancy Mace, a Republican from South Carolina. “Furthermore, how do you say the next election might not be ‘legitimate’ after spending an entire year tearing down anyone (not me) who said the last one might not be?” 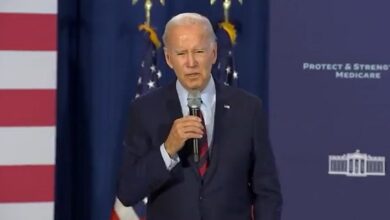