Racist Joe Biden says if black people support Trump, they “ain’t black.” His condescending statement evoked immediate backlash from blacks all over the country. The statement came during an interview on The Breakfast Club with host ‘Charlamagne tha God.’ 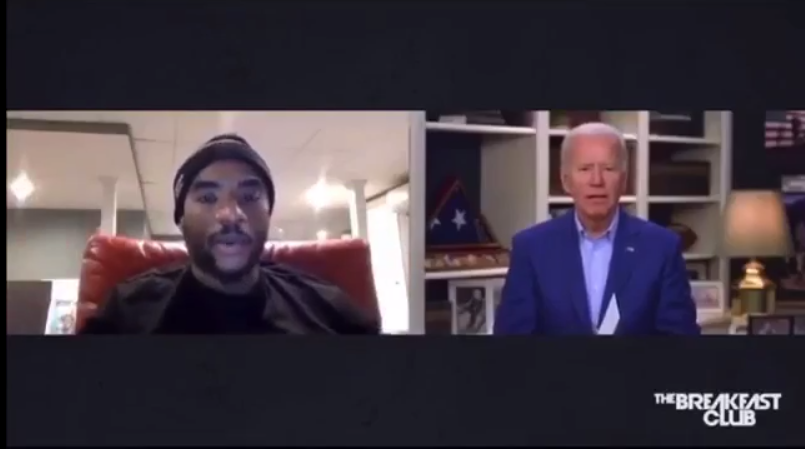 “Vice President @JoeBiden ‘s latest quote is both pathetic & hurtful. Challenging millions on their blackness is condescending. The GOP was started to oppose slavery. I have the right to think and vote for myself along with all other Americans, including black Americans.” John James in Michigan @JohnJamesMI

Here’s the excerpt from the interview on The Breakfast Club:

Aye bruh @JoeBiden I already told you the #BlackVoteAintFree pic.twitter.com/6ZoIfGFcHR

Fox reported that Senator Tim Scott was incensed over the remark that occurred 17 minutes into The Breakfast Club interview:

“Scott, R-S.C., said such comments are not surprising considering Biden’s record in “sponsoring a crime bill in the 1990s that jailed more African-American males than any other legislation.”

“And President Trump comes along, and through his criminal justice reform, corrects the absolute mistakes made by Joe Biden; 1.3 million African-Americans voted for Trump. He’s saying to 1.3 million African-Americans that you are not black? Who in the heck does he think he is? That is the most arrogant, outrageous comment that I’ve heard in a very long time and I take offense to that.”

1.3 million black Americans already voted for Trump in 2016. This morning, Joe Biden told every single one of us we “ain’t black.” I’d say I’m surprised, but it’s sadly par for the course for Democrats to take the black community for granted and brow beat those that don’t agree.

But the “You ain’t black” moment reverberated on social media, with the host retweeting a variety of listeners complaining about it. Biden “should never say to a black man ‘You ain’t black’ under ANY circumstances,” one wrote.

The Twitter response was explosive and the hashtag #BidenIsARacist was trending.

This isn’t just a “gaffe.” Racist Joe Biden has made these kind of statement before.

“Biden’s comment is beyond disgusting; it’s flat-out racist. Remember, this is the same Biden who condescendingly described Obama as the “African-American who is articulate and bright and clean.” Racist then, racist now.” @brazen_infidel

Then there’s that whole “Poor kids are just as bright and just as talented as white kids.”

#QuidProJoe: "Poor kids are just as bright and just as talented as white kids."

In view of the amount of black people who support President Trump, it appears that Biden really shot himself in the foot with this latest remark.