I suspect that, like New York Times publisher A.G. Sulzberger, NBC News President Noah Oppenheim likes to think his organization is “fair and balanced,” to borrow a slogan from another network (that really is somewhat closer to being “fair and balanced”). He would probably bristle at the suggestion that his shop operates on a double standard.

Yet, like Sulzberger — whose most recent headache is likely his paper’s decision to scrub an op-ed by Sen. Tom Cotton, generating criticism from within — Oppenheim would probably cringe if his attention were called to two tweets published a little over an hour apart, both under the NBC News umbrella.

Here’s the first, published at 4:50 p.m., June 14. The photo and the article it links back to both celebrate the size of the turnout for a Black trans lives rally in Brooklyn. 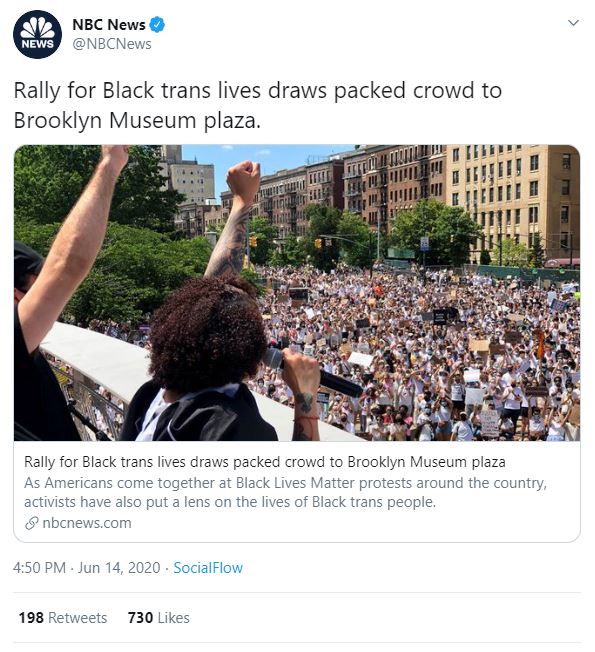 The second tweet, published at 6:13 p.m., June 14, displays a photo of a past Trump rally. The text advises that the president will hold a new rally next weekend despite the “dire warning” of “top health officials” that this is an “extraordinarily dangerous” undertaking. 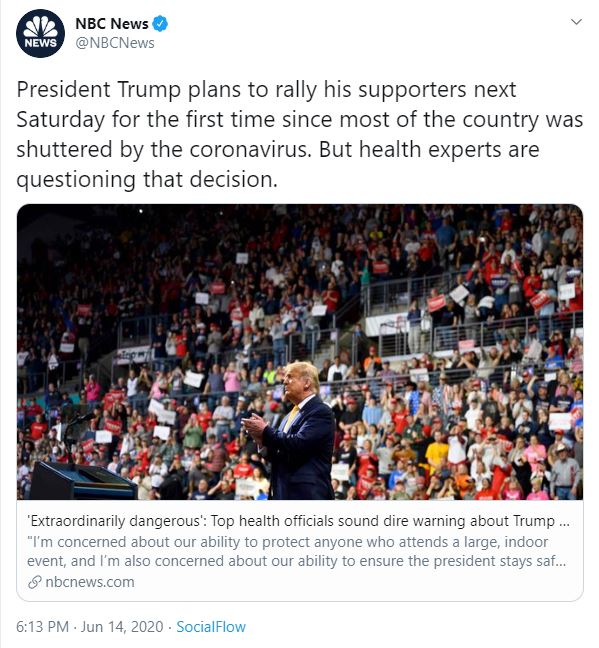 So NBC’s stance on people packed into a dense crowd varies depending on their reason for so doing. If it is to cheer on a liberal cause, such as recognizing trans black, no problem. If it is to cheer the president of the United States on to a second term in November, problem. The Trump campaign, mind you, has announced that they will be taking extraordinary precautions to ensure the safety of attendees, something that can’t be said of the organizers of the rally in Brooklyn yesterday.

How would Noah Oppenheim react to these tweets? I can’t say, but someone in some level of management at his organization did get wind of the potentially embarrassing tweets, because both were “dealt with.”

The Brooklyn rally tweet initially disappeared, then reappeared verbatim at 6:48. But now the tweet had a new author, Eliel Cruz, whose Twitter bio identifies him as “Director of Comms at @AntiViolence (opinions my own etc).” Opinions my own! How convenient. The tweet, by the way, still points to the same NBC News article.

The Trump rally tweet also has a new author, Star Tribune. Again, the text of the tweet is identical, but in this tweet the photo has been replaced. The link, moreover, now points to an article at the Star Tribune site picked up from the Associated Press.

President Trump plans to rally his supporters next Saturday for the first time since most of the country was shuttered by the coronavirus. But health experts are questioning that decision. https://t.co/SdIZdBuEco