As we reported on Tuesday, a Project Veritas video captured Twitter employees appearing to brag about how personal data — even pictures of a sexual nature — are allegedly maintained and viewed by others in the company.  This prompted Chadwick Moore, a Twitter user who describes himself on the site as a “Constitutional conservative, journalist” and a “rogue homosexual” who has been blocked by Jake Tapper and banned by Facebook, to suggest in a series of tweets that the company may be storing child pornography on its servers — a violation of federal law.

“The age to join Twitter is 13, and teens are no stranger to sending each other nudes. Today’s @Project_Veritas revelations suggest if teens are sexting over DM, @Twitter stores child pornography on their servers and employees can access it freely. @jack can you respond?” he tweeted.

He followed that up with another tweet, citing statistics which indicate a number of teenagers engage in “sexting.”

“One third of teens are on Twitter, according to Pew, and 42 percent of 15-17 year olds. In another study from U of Utah, 41 percent of teen boys and 30 percent of girls reported receiving ‘sexts’ online,” he said.

“According to Pew Research from 2105, high schoolers aged 15-17 are the most active demographic on Twitter. How does that play into the 300-400 employees hired to look at ‘d**k pics’ in DMs?” he asked in another tweet (Edited for language).

The allegation stems from a statement made by engineer Clay Haynes, who is seen in the video telling Project Veritas: “There’s teams dedicated to it. I mean, we’re talking, we’re talking three or four… at least, three or four hundred people… Yes, they’re paid to look at d*ck pics.”

Moreover, Pranay Singh, a Direct Messaging Engineer, bragged to the undercover Project Veritas reporter that “everything you send is stored on my server… So all your sex messages and you, like, d*ck pics are on my server now…”

Moore’s tweet was met with shock by many of those who responded:

As a matter of fact, it is, according to the Department of Justice, which explains:

Images of child pornography are not protected under First Amendment rights, and are illegal contraband under federal law. Section 2256 of Title 18, United States Code, defines child pornography as any visual depiction of sexually explicit conduct involving a minor (someone under 18 years of age). Visual depictions include photographs, videos, digital or computer generated images indistinguishable from an actual minor, and images created, adapted, or modified, but appear to depict an identifiable, actual minor. Undeveloped film, undeveloped videotape, and electronically stored data that can be converted into a visual image of child pornography are also deemed illegal visual depictions under federal law.

The DOJ also says that “the age of consent for sexual activity in a given state is irrelevant; any depiction of a minor under 18 years of age engaging in sexually explicit conduct is illegal.”

And, the DOJ added, the law “does not require that an image depict a child engaging in sexual activity. A picture of a naked child may constitute illegal child pornography if it is sufficiently sexually suggestive.”

Federal law prohibits the production, distribution, reception, and possession of an image of child pornography using or affecting any means or facility of interstate or foreign commerce (See 18 U.S.C. § 2251; 18 U.S.C. § 2252; 18 U.S.C. § 2252A). Specifically, Section 2251 makes it illegal to persuade, induce, entice, or coerce a minor to engage in sexually explicit conduct for purposes of producing visual depictions of that conduct. Any individual who attempts or conspires to commit a child pornography offense is also subject to prosecution under federal law.

Federal jurisdiction is implicated if the child pornography offense occurred in interstate or foreign commerce. This includes, for example, using the U.S. Mails or common carriers to transport child pornography across state or international borders. Additionally, federal jurisdiction almost always applies when the Internet is used to commit a child pornography violation. Even if the child pornography image itself did not travel across state or international borders, federal law may be implicated if the materials, such as the computer used to download the image or the CD-ROM used to store the image, originated or previously traveled in interstate or foreign commerce.

The Justice Department website additionally said that a first time offender convicted of transporting the lewd material in “interstate or foreign commerce under 18 U.S.C. § 2252, faces fines and a statutory minimum of 5 years to 20 years maximum in prison.”

In a statement to Buzzfeed, Twitter denied the charges but did not say how many employees have access to the material.

“We do not proactively review DMs. Period,” a company spokesperson said. “A limited number of employees have access to such information, for legitimate work purposes, and we enforce strict access protocols for those employees.”

A former senior employee said the charges made in Monday’s video were “technically accurate to a degree, but exaggerated for effect by drunk idiots.”

“We deplore the deceptive and underhanded tactics by which this footage was obtained and selectively edited to fit a pre-determined narrative,” Twitter said in response to earlier videos published by Project Veritas. “Twitter is committed to enforcing our rules without bias and empowering every voice on our platform, in accordance with the Twitter Rules.”

If Twitter is stating that it isn’t hundreds of people who have direct access to private messages, just how many people do? How many people constitute “a limited number of employees?” And just what are the “strict access protocols” Twitter allegedly enforces on their employees?

Regarding Twitter not proactively reviewing DMs, the cavalier attitude of multiple employees, combined with access to the messages and political or advertising motivations, suggests otherwise.

He also posted a series of questions, including: “Since Twitter states that hundreds of employees do not have direct access to DMs, just how many employees and contractors have this level of access?”

As we reported last Thursday, David Rosler, maker of the faith-based 3D movie “Orbiter,” told the Conservative Firing Line that he believes employees may have violated 18 U.S. Code § 241 – Conspiracy against rights.

Perhaps it’s time for authorities to investigate the situation and take the necessary action — before the evidence gets dropped in the “bit bucket.”

Moreover, it’s time for Congress to step up to the plate and take measures to stop the abuse many users have suffered at the hands of out-of-control social media companies. 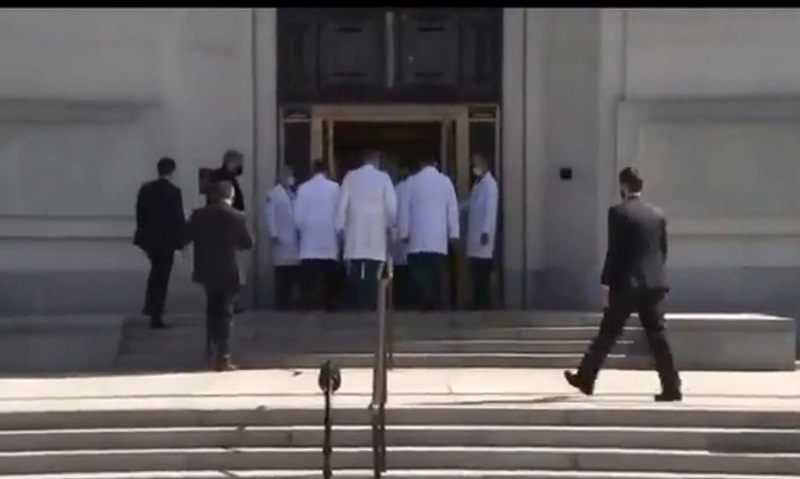 Inside Hillary’s Basket of Deplorables: A White Texas Mother