It seems that the United States isn’t the only country plagued with “fake news” that pushes a left-wing narrative.

Canada’s media — that receive heavy handouts of taxpayer dollars courtesy of the Trudeau Liberal government — and “public health” officials are determined to keep Canadians in a constant state of fear despite over 82% of eligible residents fully vaccinated for the coronavirus.

In Canada’s most freedom-loving province of Alberta, the Chief Medical Officer of Health, the seemingly psychotic Dr. Deena Hinshaw…

This is the most psychotic thing I have ever seen @CMOH_Alberta pic.twitter.com/Jheq6eHznm

[EDITOR’S NOTE: That video is not doctored. You can see the full video on YouTube.]

…included in the weekend COVID death toll a 14-year-old with “complex, pre-existing health conditions” who had tested positive for the virus just days prior to his death.

On Tuesday, Dr. Hinshaw said, “Sadly, people continue to die due to COVID-19. Since Friday, we have had an average of 8 new deaths per day reported to Alberta Health with a total of 33 over the weekend. This includes the death of a 14-year-old who had complex, pre-existing medical conditions that played a significant role in their death. I extend my deepest condolences to the families of all of these individuals, and to any Albertan who is mourning the loss of someone they cared about.”

Hinshaw admitted that the teen had “complex, pre-existing medical conditions that played a significant role in their death” but it was within the context of the people dying “due to COVID-19.” She did not state what the medical conditions were.

From the article published on Tuesday:

As Albertans celebrated Thanksgiving across the province this past weekend, Alberta reported it’s [sic] youngest COVID-related death to date.

Among the 33 new deaths reported over the weekend was a 14-year old who had “complex, pre-existing medical conditions.”

As for the other 32 reported deaths, they ranged from a person in their 30s, up to a pair of Albertans in their 90s.
Source: CityNews (Emphasis Added)

While the article used weasel words to note that the teen had “complex, pre-existing conditions” that “played a role in his death”, the article and headline implied that the teen died — at least in part — to COVID infection.

Hinshaw also posted about the teen’s death on Twitter. 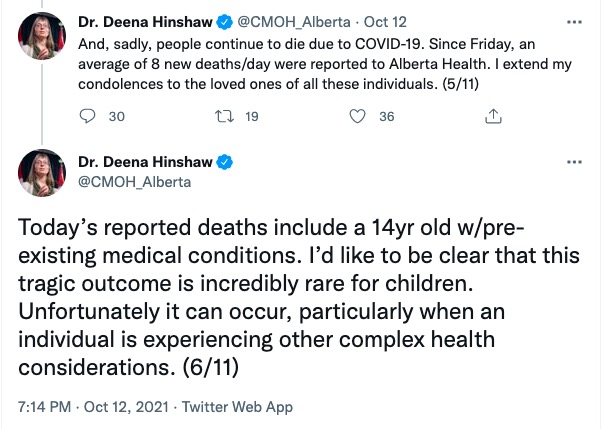 In a Facebook post, the teen’s grieving sister linked to the article and explained that the “complex, pre-existing condition” that her brother had was Stage 4 brain cancer. She said the article was “fake news” asked that comments be made on the article to reflect that. 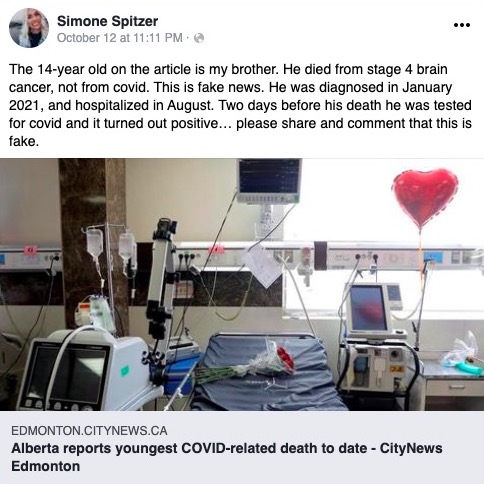 In theory, at least, Alberta Health only reports deaths due to SARS-CoV-2 if COVID is a primary or secondary cause of death. That’s clearly not what happened here.

This incident is a prime example of the way that facts are laundered to push a narrative.

“How many other times has this happened?” asked the inestimable David Freiheit. The YouTuber breaks down everything that is wrong with the way that Hinshaw and the media handled this situation here:

The headline at CityNews has been changed and included an update indicating that the teen’s death wasn’t caused by COVID.

Chief Medical Health Officer Dr. Deena Hinshaw has removed the 14-year-old from the [sic] Tuesday’s list of COVID-related deaths. Hinshaw says the initial report included COVID-19 as a secondary cause, but “additional information” indicates the novel coronavirus was not the cause of death.
Click here for the full story.

So… how did this happen?

This disgusting narrative framing occurred because a new wave of panic set in along with another wave of the China Virus. As concern was raised over hospitals becoming overwhelmed with patients, the public health officials and politicians — but I repeat myself — decided that it was important to deflect from the failing Canadian healthcare system. This was done in two ways — vilify the unvaccinated as the main spreaders of the virus, and highlight the hospitalization of children to maximize fear.

As we mentioned in a previous article, the Canadian single-payer healthcare system is skeletal and cannot handle the added stresses that a pandemic poses.

The fearmongering is clearly a way to steer criticism of the healthcare system that doesn’t have enough hospital capacity to deal with a bad flu season. Earlier in the pandemic, the province’s ICU utilization was at a 5-year low which is incredible since there are only about 370 ICU beds in the entire province of 4.4 million people.

There’s also a real push in Canada to get children vaccinated for COVID.

A shame-faced Hinshaw apologized after the fit hit the shan and it was pretty clear that she had used the teen’s death to push that teens could die from the China Virus.

“While the initial report of the death of the 14-year-old included COVID as a secondary cause we have now received additional information that indicates COVID was not a cause of death,” said Hinshaw on Thursday.

Dr. Deena Hinshaw apologized Thursday to the family of a 14-year-old boy with other medical conditions who she had said died from COVID-19. A subsequent review determined that not to be the case.

She reiterated her apology on Twitter on Thursday as she reported the COVID infection and death count.

Here is a summary of today’s #COVID19AB update: I would like to apologize to the family of the 14-year-old I spoke about on Tues. The pain of losing a child is terrible enough without having that loss compounded by a public debate about the circumstances. (1/9)

Do you buy it? Or do you think that Hinshaw apologized because the news story that was based on what she said was called out by the family?

How many other times has this happened? We know that the reports of the number of kids hospitalized with COVID is overcounted because COVID testing is mandatory in most hospitals. David Zweig covered that at New York Magazine back in May.

These “medical experts” don’t seem to care who they hurt or vilify as long as they get you to comply. 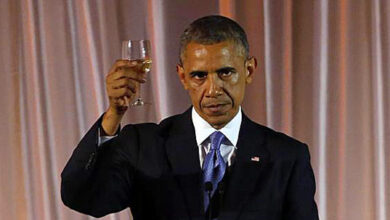