On Tuesday, the UK Daily Mail reported that police have responded to the Trump International Hotel in Washington, D.C., after an anonymous online threat by an individual reported to support the far-left Democratic Socialists to shoot up a meeting held to back up the president.

“I am coming with a gun and i (sic) expect to get numerous bloodstained MAGA hats as trophies,” the anonymous Twitter account said in response to a tweet by the Gateway Pundit’s Cassandra Fairbanks. 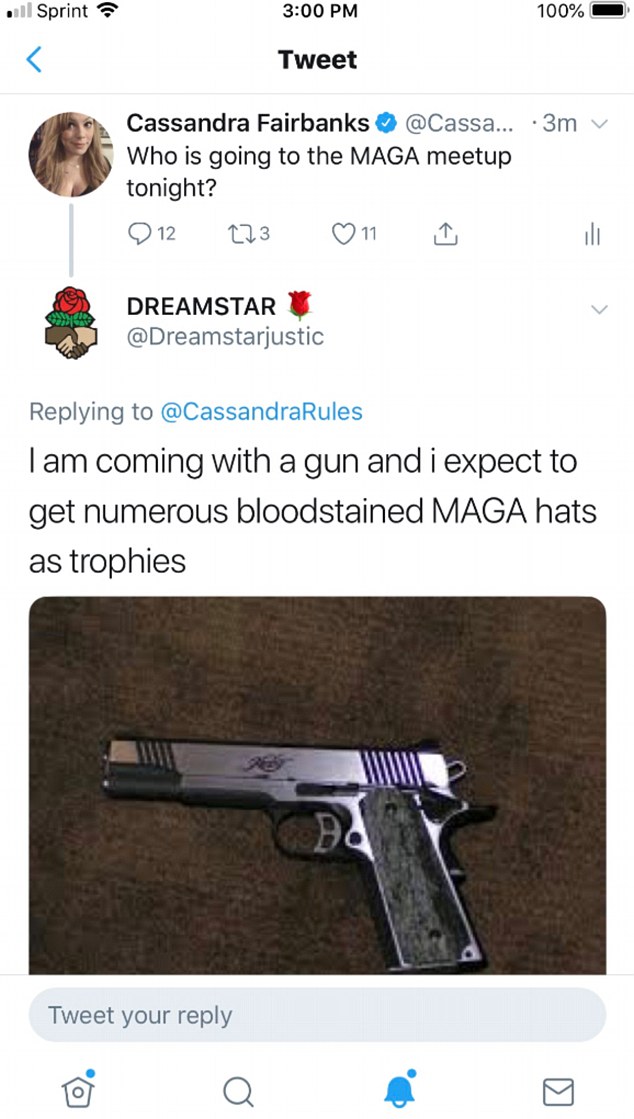 On Tuesday evening, MPD vehicles were spotted outside of the hotel.

A hotel manager confirmed that staff were aware of the threat and taking appropriate security measures.

Fairbanks said the meeting, which apparently takes place every month, was “a mix of several different pro-Trump groups including Virginia Women for Trump. Members of the media, midterm candidates and people who work closely with the president are often in attendance at the events.”

Twitchy responded: “Isn’t it funny how the anti-gun crowd always seems to entertain violent gun fantasies while law-abiding gun owners are demonized for wanting to go to the range for recreation?”

We’re guessing — guessing — this was an empty threat and the person got scared and deleted his or her account once the police got involved. But then again, after news of that stabbing attempt, you can’t assume too much.

Maybe the threat was empty, maybe it wasn’t, but Fairbanks was absolutely correct to report it, especially considering the level of hatred that now drives the increasingly-insane left.

The reported threat, by the way, took place the same day that a man was arrested after allegedly attempting to stab a Republican running against Democrat Rep. Eric Swalwell.

Is There A Connection Between 5G, The Vaxx & The Magnetic Phenomenon?
June 18th, 2021 Sons of Liberty Media