Yesterday’s “conspiracy theory” is today’s news — quite literally in this case.

Oh, what a difference a day can make.

On Monday, October 3, New York Times writer Stuart A. Thompson brushed off his best purple prose to cynically frame a story in the way the left’s media always does.

Rather than writing a story telling the five w’s about a specific incident — in this case, claims that election security had been endangered by a company alleged to have exposed the data of some 2 million poll watchers to foreign entities. Specifically, China.

Thompson waxed poetic about how ‘election deniers’ on the right were pushing ‘unfounded voter fraud claims’ and ‘unspooling a new conspiracy’.

The very next day, Thompon was forced to write another story. This one detailed the arrest of the same company’s CEO for exactly the issues he had scoffed at just one day earlier.

Strangely enough, the purple prose was missing in the second telling.

Hat tip to Mollie Hemmingway for keeping up with the clowns at the Times and blowing the whistle when they get something as terribly, terribly wrong as Thompson just did. 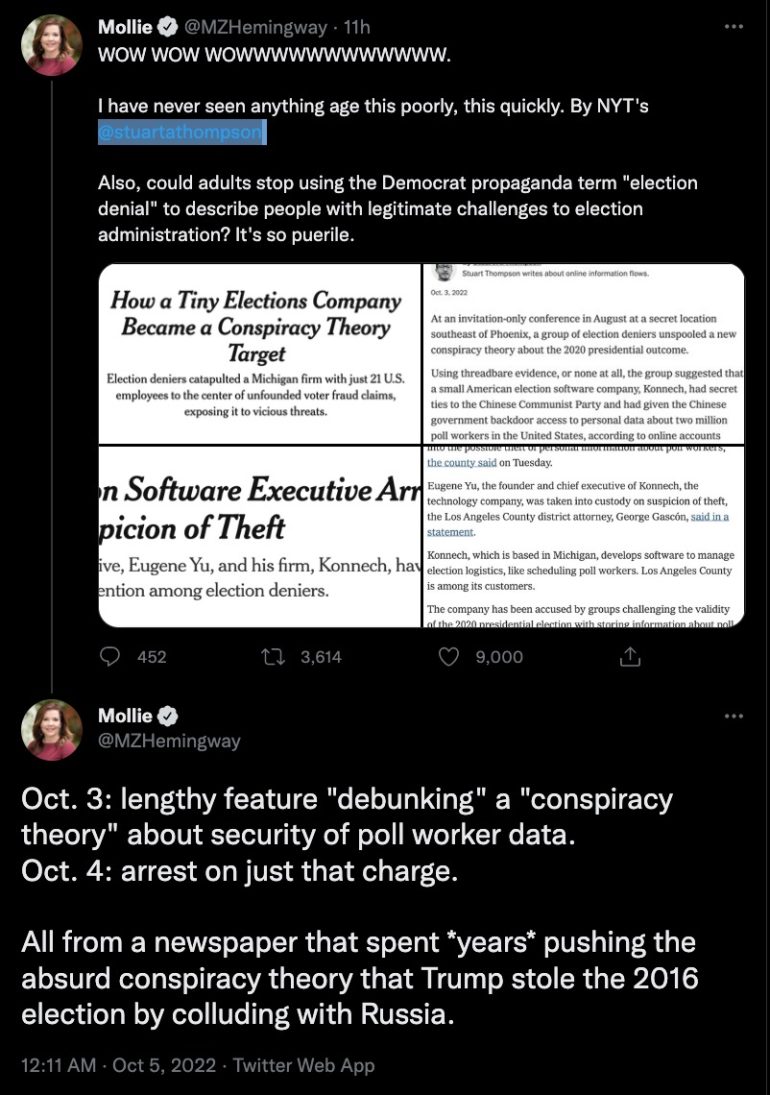 Here are the screengrabs she included. (Key words not highlighted in original) 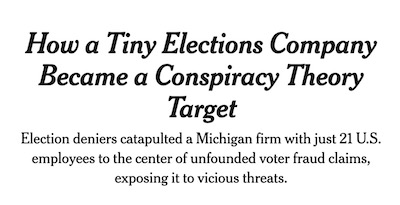 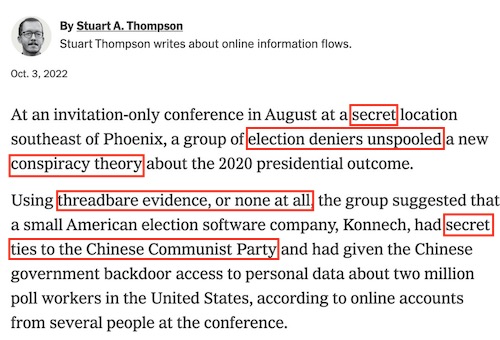 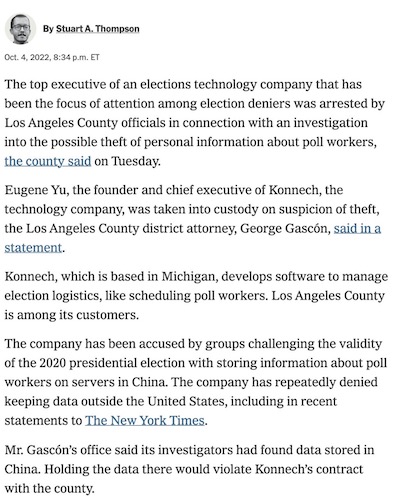 Look closely at what he said in the story on he second day.

Thompson insisted on using the same pejorative terms in this story despite all of the allegations he had scoffed at only one day earlier being confirmed as valid the very next day.

Not only did investigators actually find data being stored in China — knowing that, when digital information is being stored there, the Chinese Communist Party has legal access to any information they want — but look who it was that laid charges on the company.

Unless the New York Times now views Soros-backed hard-left California AG Gascón as a backer of Trump’s claims of 2020 election interference, everything the guy said just one day earlier was shown to be the brightest shade of yellow journalism.

The LA Times gave a far more impartial telling of the events. But even they left out one detail critical to this story. Thompson’s snarky post makes a lot more sense when you realize who, specifically, he is trying to snub here.

Remember True The Vote? They made an official statement in response to the arrest.

True the Vote is honored to have played a small role in what must have been a wide ranging and complex investigation. The organization is profoundly grateful to the Los Angeles District Attorney’s office for their thorough work and rapid action in this matter.
True the Vote was sued last month by Konnech to try to silence our organization, including obtaining an ex-parte TRO, conducted in secret so that True the Vote had no opportunity to contest it. This TRO limited True the Vote’s ability to speak on the litigation. Today Konnech CEO Eugene Yu was arrested based on alleged evidence of the very activities he and his organization attempted to suppress. Konnech was assisted by many reporters who unblinkingly accepted their now discredited claims as fact, and simply repeated them.
According to True the Vote Founder Catherine Engelbrecht, “Election integrity should not be a partisan issue, nor should media try to suppress all conversation about it in a way that benefits one party. We will continue to report evidence of threats to our election process and work with law enforcement to ensure our elections are a secure space for all American voters.” –USA News

Unlike Thomposon, the LA Times was able to manage publishing the basic facts without undue editorialization.

Los Angeles County prosecutors have accused the chief executive of a small Michigan software company of compromising the personal information of hundreds of county elections employees.
Eugene Yu, 51, was arrested early Tuesday just outside Lansing, Mich., after prosecutors alleged he improperly stored the information on servers in China, according to Los Angeles County Dist. Atty. George Gascón. Yu, who is the chief executive officer of a company named Konnech, is expected to be extradited to Los Angeles in the coming days, Gascón said.
…It did not appear any of the information had been sold, and Gascón said Yu’s alleged actions had not compromised an election’s integrity.
Prosecutors learned of the data breach this year through a “separate investigation” undertaken by the district attorney’s office, according to Gascón. He would not say what the other investigation was or exactly when his office became aware of the breach.
In a statement, L.A. County Registrar Dean Logan said he did not learn of the the district attorney’s office’s actions until this morning. A spokesman for the registrar did not respond to questions about the county’s contract with Konnech or a request for a copy of the agreement. –LATimes

And yet, for some reason, the Times claims the title of being the ‘paper of record’. 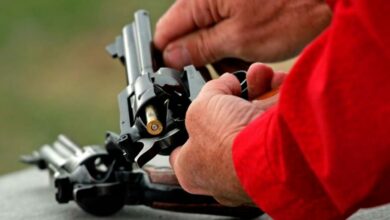 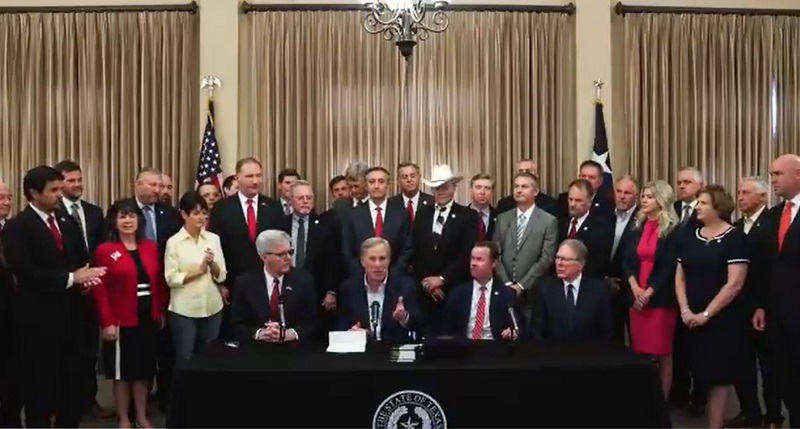