Photos have surfaced of Hillary Clinton, the most evil person ever nominated to the White House by a major party, dining with disgraced Hollywood mogul Harvey Weinstein five weeks after she lost to Donald Trump in the 2016 presidential election.

It is a strong indication of just how close the Clintons were with Weinstein, dining just months prior to her denouncing him for the allegations of reprehensible behavior lobbied by numerous women.

“I was shocked and appalled by the revelations about Harvey Weinstein,” Clinton would later claim in a statement necessary because he was such an avid donor to the Clinton Foundation.

“The behavior described by women coming forward cannot be tolerated,” she added.

Wonder how those women feel about seeing the Clinton’s wining and dining with the man who has since become an accused serial rapist.

PICTURED: Hillary and Bill's intimate dinner with Harvey Weinstein weeks after her election loss – showing just how close the Clintons were to the 'serial rapist' movie mogul https://t.co/tYKpimt2Ay via @MailOnline

In all actuality, Hillary is sitting at a table between two accused rapists in those images.

Weinstein had donated $250,000 to the Clinton Foundation and another $10,000 to Bill Clinton’s legal fund in the midst of battling impeachment during the Monica Lewinsky affair.

As the reality behind Weinstein’s behavior enveloped her circle, Mrs. Clinton announced that some of those donations would be given to charities, though there is scant evidence that the foundation followed through.

Reports indicate that Weinstein and the Clintons were in talks to cash in on a documentary about her failed campaign when the photos were taken.

Politicians play by a different set of rules, but especially the Clinton's! https://t.co/Ay3fzbtSIE

Clinton has long tried portraying herself as woman willing to listen to and believe other women who have made allegations against powerful men, a nuclear weapons-grade level of chutzpah considering who she is married to.

Every survivor of sexual assault deserves to be heard, believed, and supported. https://t.co/mkD69RHeBL

Juanita Broaddrick, a former nursing home employee who in 1999 accused Bill Clinton of raping her decades earlier when he was a gubernatorial candidate in Arkansas, called her out on her hypocrisy.

Hillary responded by removing the phrase “you have the right to be believed” from her campaign website. 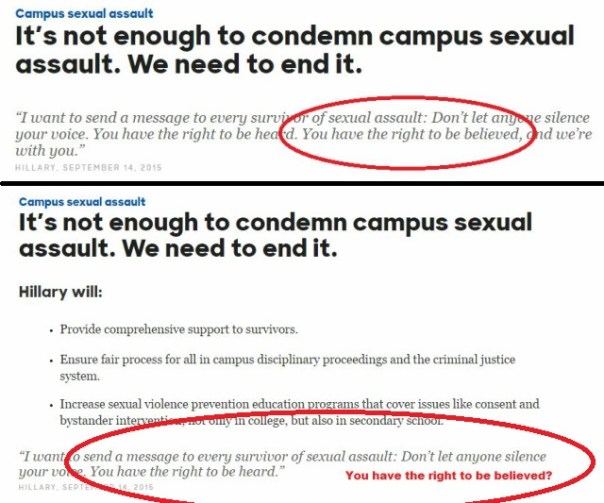 Despite Hillary’s claims, she has never believed her husband’s accusers, no matter how many there might be.

Earlier this year, video resurfaced of Hillary in 1998 threatening all of the women who have made accusations against her husband.

Celebrity chef Anthony Bourdain, in an interview just before his tragic suicide, weighed in on Hillary’s disgusting response to the Weinstein scandal.

“Watching the Clinton apology on Weinstein, and [Asia’s] watching this statement, there was a lot of anticipation,” he lamented. “People were really hoping she’d come out with a… I don’t know. Let’s just say with something different.”

‘Asia’ is Asia Argento, Bourdain’s girlfriend at the time, who claimed Weinstein sexually assaulted her in 1997.

“I immediately tweeted my disappointment, very much shaped by what I saw around me,” he continued. “And I will tell you, that was really f***ing frightening, the reaction to that. You know, I voted for her.”

The problem with the Clinton’s is that they knew Weinstein was trouble. They just didn’t care.

Roughly one week after Hillary’s statement about Weinstein, a longtime associate of the Clinton family penned a column for the Hollywood Reporter in which she claims to have warned “at least three top-level Democratic operatives against allowing Harvey Weinstein to host political fundraisers.”

They didn’t care. They only care about the almighty dollar.

These photos show Weinstein was willing to make the Clintons a few more bucks even by capitalizing on her being a loser.