“Netanyahu has more connection to me as a Palestinian than the king. Netanyahu’s parents could have been our neighbors in Haifa, while this king’s grandparents never knew what Aman or Jerusalem looked like.”
– Raed Khammash, a Palestinian-Jordanian opposition leader who lives in exile in California
As the world continues its descent into hell, Iran is conducting what’s called ‘mechanical’ tests on a new highly advanced centrifuge…a centrifuge NOT part of those currently under UN watch… centrifuges that will be used to refine uranium allowing Iran to garner atomic bomb material much faster than ever before. And if that’s NOT bad enough, it’s now come to light that U.S. troops under Obama’s watch and command trained ISIS members at secret a base in Jordan in 2012.
Barack HUSSEIN Obama claims that the rise of ISIS was unexpected…and has caught everyone off guard. In a word…LIAR…as the facts speak for themselves. Facts like that in February 2012, the U.S., Turkey, and Jordan were operating a training camp for roughly 200 rebels who belonged to the Free Syrian Army…who in turn became members of ISIS…and did so in Safawi, a town in Jordan’s northern desert region. There were also plans to train more ‘so-called’ rebels at two other camps in the south and the east of Jordan. Obama knew about this and sanctioned this as NO secret U.S. operations are done without the president’s knowledge and approval…as did Jordan’s King Abdullah II for the same reasons, and also because of his fear that the violence in Iraq would spill over into his own country…which it has. More on that in a bit.

Claiming to have vetted all those being trained for any ties to terror groups like al-Qaida…another LIE… these people were focused on the use of anti-tank weaponry…weaponry needed when engaging those trying to takeover a country or when engaging those trying to keep their country from being overtaken. And with it being known that Saudi Arabia is one of the brethren countries arming ISIS…and with Obama’s constant catering and bowing down to Saudi’s king…he damn well knew about ISIS training fighters in Turkey as well…fighters who then went to Iraq via Syria to slaughter any who opposed them in their quest to establish a strict islamic caliphate throughout the Middle East…and then to spread west.And the spread west has started with Jordan being ISIS’ first stop. Now openly marching into many Jordanian cities with their flags of death held high, King Abdullah’s forces are doing NOTHING to stop them. But the question is does ISIS actually have the support of Jordan’s people…let the facts speak for themselves with the primary fact being that Jordan’s 6.3 million Palestinians are NOT happy with the king who denies them rights, privileges, and assistance other Jordanians receive.And with Jordan’s government-controlled media suddenly taking to calling Mohammed Dief…the chief commander of the al-Qassam Brigade (the military wing of Hamas) and the man whose wife and child were killed in one of Israel’s recent IDF attacks…a hero…you know that things will only go from bad to worse in Jordan.

And the worse started in the town of Ma’an where the ISIS flag flies over the city. Ma’an is a Bedouin village in the southern part of Jordan whose people are strong fundamentalists with many being Salafists…strict adherents of the haddith…strict in their belief of islamic orthodoxy, temporal proximity to muhammad, and that their beliefs are the truest form of islam…translating into every single word laid down in the qur-an and haddith are NEVER to be questioned…much like some believe that every single word in the Bible is true and must NEVER be questioned.

On June 24th, Ma’an saw a pro-ISIS demonstration take place…a demonstration where the black flag of ISIS waved over many businesses and government buildings…flags that are still there today. And this demonstration took place with NO interference from Abdullah’s government forces…forces who looked on but did NOT a thing to stop them even with King Abdullah being on ISIS’ hit list. And critical amid shouts of ‘allahu akbar’ and ‘Jordan will be an islamic state,’ one important fact must be noted…in this demonstration those taking part did NOT cover their faces… meaning they have NO fear of the Jordanian government, its police, its secret service, or its king. And without fear of the state or fear of the king…the country becomes ripe for ISIS to move in and actually take over with NO opposition whatsoever…and many who would have lost their heads will now get to keep them. 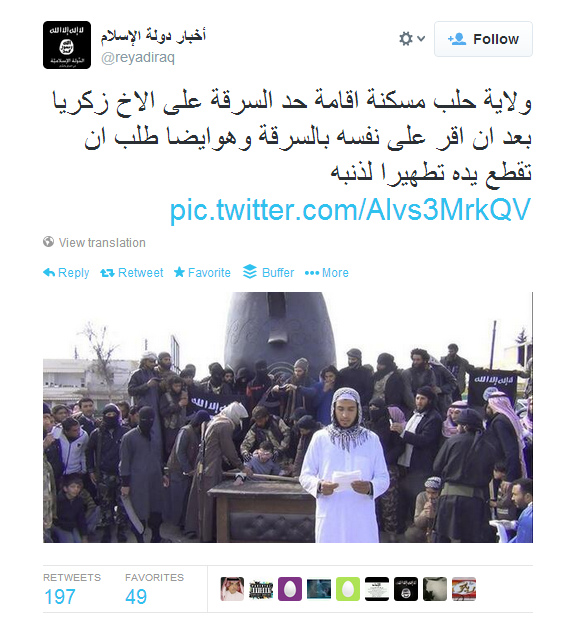 And as ISIS moves further into Jordan with NO opposition facing them, this means Israel faces a precarious situation as Jordan, just by its being where it is geographically, serves as a buffer of sorts between them and the jihadists in Iraq and Iran…jihadits whose goal is to wipe Israel off the map. In fact, after rummages started coming from the Middle East that there will soon be a battle between the IDF and ISIS itself…even though the Saudi and Jordanian kings, the prime minister of Iraq, the president of Egypt, and the leadership of the Muslim Brotherhood are who ISIS plans to take out first…ISIS issued this statement on its Twitter account: “We haven’t given orders to kill the Israelis and the Jews. The war against the nearer enemy, those who rebel against the faith, is more important. Allah commands us in the Koran to fight the hypocrites, because they are much more dangerous than those who are fundamentally heretics.” And they cited the first caliph, Abu Bakr, as proof as he was a man who began by fighting those who rebelled against the faith, as well as Saladin, who fought the Shi’ites in Egypt before conquering Jerusalem…meaning Israel has time to prepare against ISIS but that she must also face the fact that if Jordan falls ISIS will be at their door.

And this means that Jordan must be kept intact to both stop ISIS and to give the Palestinians their Jordanian birthright back to them, and if given their birthright back they will NO longer be banned from jobs, from getting an education, etc., and thus their lot in life will improve. But currently with NO birthright…and remember the term ‘Palestinians’ is a made-up term…they have hit rock bottom with NO hope per se, so by NOT fighting back against ISIS…by welcoming of sorts ISIS into Jordan even knowing of their brutality…they hope their willing acceptance of them will afford them a different outcome than others have faced.

Now let’s go back to the 1987 intifada, and remember that before 1987 the Palestinians and Israelis lived side by side…co-existing if you will. And know that this intifada would NEVER have happened without Qatar, Kuwait, Oman, and the Arab Emirates pumping billions of dollars into it with their sole goal of keeping Israel ‘busy’ so to speak. And it’s in the Obama administration’s best interest…in Obama’s personal interests of siding with his muslim brethren…to keep Israel from becoming an outright regional super power. So it had to be made that if Israel ‘sleeps’ even for one day that they will be NO more…hence the ‘manufactured’ problems in Gaza and the West Bank. And in Obama’s reasoning…that is if you call what he does reasoning…if you can’t ‘officially’ in the eyes of the world claim Jerusalem as your own capital you must be kept under control…you must be kept on a tight leash. And the so-called Palestinians are being used as the most promoted cause in the world in order to keep Israel under that control for Israel must be kept weak as anti-Semitism is big business. And the Palestinian cause may just be why all modern American presidents have NOT ‘officially’ accepted Jerusalem as Israel’s official capital.

And so it’s in Israel’s best interest to defuse the Palestinian cause by supporting, in secret, a Palestinian homeland in Jordan. And with King Abdullah facing strong opposition at home, it becomes apparent that if he is to stay in power he needs to give something back…as in giving the Palestinians back their Jordanian birthright …and that birthright does NOT necessarily have to involve physically giving them land. In fact, Article 2 of Jordan’s Citizenship Law of 1956, says all non-Jewish Palestinians are born Jordanians…meaning all Palestinians in Gaza, the West Bank, Syria, and Lebanon are Jordanians by law and are entitled to all that law affords them.

And all Abdullah needs to do is just apply the law as written and the entire Palestinian situation would be resolved with a simple signature on paper. And that signature would lead the way for Jordan and Israel together, along with Egypt, to become a strong united force that could keep ISIS at bay. And know that el-Sisi is a true ally of Israel as he grew up in the Jewish quarters in Cairo’s Khuronshouf district. And he holds fond memories of being invited to Passover dinners, and helping to switch lights off on Saturdays, as recently told by one of the locals on Egyptian TV.

Bottom line…the key to stopping ISIS in Jordan is to give the Palestinians back their birthright, because then allegiances…lasting allegiances…will be forged. And if Jordan’s king cannot save himself or protect his own borders from ISIS…even after asking for military protection from both the U.S. and Israel…then why do the Jordanians even bother keeping him in power for they need a leader like el-Sisi to stop ISIS dead in its tracks. Remember, the prime excuse used for keeping all Jordan’s weak kings in power has always been that they protected the borders, but now with Jordan’s king coming under sharp criticism from his own people…despite his having received up to $15 billion in military assistance alone from the U.S. since 2000…despite his receiving 24/7 intelligence and military surveillance reports from Israel…the simple fact is that King Abdullah II can NO longer help protect either Israel’s borders or his own from ISIS.

And so it has become obvious that with ISIS already in Jordan, their king has looked away in fear because he does NOT have his people’s support. If you compare him to el-Sisi, an Egyptian muslim representing 90 percent of his people to Abdullah’s representing 87 people called the Hashemites, this means that even if he wanted to ban the Muslim Brotherhood…which he does NOT…or stop ISIS from further incursions into Jordan…he does NOT have the merit to do so simply because he is NOT Palestinian as are the people of his country.

So the myths about Jordan’s king being the best friend Israel has…a best friend supposedly dedicated to keeping Israel safe and whole…are just that…myths…and NO more. And while Jordan’s King Abdulla II might be convenient to have around during times of peace, he is an obstacle and a burden during times of war both to Israel and to the Jordanian people as they come face-to-face with the barbaric killers known as ISIS.

CNN’s ‘Cult Expert’: All of America Needs Deprogramming Because of Trump
January 19th, 2021 The Mental Recession