After realizing that someone took her life-size statue of Barack Obama, Wilkes-Barre, Pennsylvania, resident Tiffany Bruce panicked and had to go to the hospital, WNEP reported.

“I peeked my head out the door and Obama’s gone and I kind of went into a panic. I couldn’t breathe, and I had to go to the hospital,” she said.

Bruce moved into her home on Rita Street in the city a little more than a year ago. Since then, the statue had become a staple in the neighborhood and her family, dressing him up for Halloween and as Santa during Christmas.

At the time, she said she wasn’t sure if she would replace the statue, but it seems that won’t be necessary.

On Thursday, Fox 13 reported the statue was found on a park bench in a neighboring town.

Photos provided to the station show a nearly empty bottle of Twisted Tea in the statue’s hand, a pack of empty Twisted Tea bottles on the bench next to it and a cigarette in its mouth.

The only thing missing is a golf club…

It is unclear how the life-sized statue ended up there or who took it.

And to think “Hillary” could’ve been stolen with Obama.

“I was going to get a Hillary too, but I don’t want to do it now,” she said when the statue first went missing… 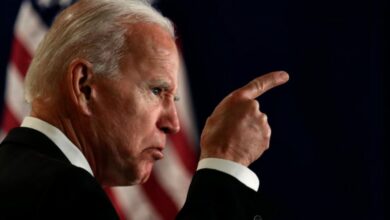