On Friday, the Obama regime issued a press release striking out “Israel” as the country where Jerusalem is located, the McClatchy DC news service reported.

The administration initially sent out a copy of President Barack Obama’s remarks at former Israeli Prime Minister Shimon Peres’ funeral in Jerusalem, indicating that the remarks had been given in Jerusalem, Israel. But later Friday afternoon, the press office sent out a correction to the previous email, striking out “Israel” from the header of the transcript.

U.S. policy has long refrained from recognizing any nation’s sovereignty over Jerusalem. Both Israelis and Palestinians claim Jerusalem as their capital, with Israel declaring in 1980 the city was its undivided capital. A 2015 Supreme Court decision reaffirmed U.S. practice that forbids Americans born in Jerusalem to list Israel as their country of birth on passports. 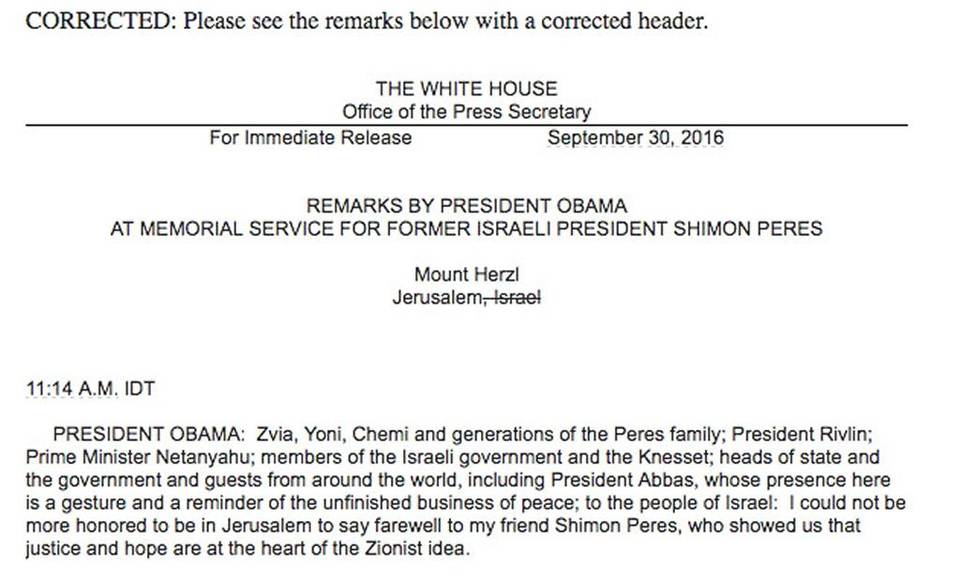 Official U.S. policy refrains from recognizing Jerusalem as Israel’s capital until the conclusion of final-status talks aimed at creating a Palestinian state, ostensibly incorporating eastern sections of Jerusalem.  The State Department forbids Americans born in Jerusalem to list their capital as Israel, a practice reaffirmed by a 2015 Supreme Court decision.

It didn’t sit too well with many on Twitter.

What does Hillary Clinton think of the Obama White House denying that Mount Herzl in West Jerusalem is in Israel? https://t.co/3uhNwstQa6

The U.S. embassy in Israel is in Tel Aviv, but the country maintains a consulate in Jerusalem. Congress passed a law in 1995 calling for the embassy to be moved to Jerusalem, but presidents since then have used their waiver authority to prevent the change.