AS always, cards on the table: whenever one of the “tribe” – especially, those who portray themselves to the outside world as religious Orthodox Jews, no less – get caught with their hands in the cookie jar, or with their pants (literally) around their ankles, well, let’s just say it doesn’t go down well. More than disgraceful. Distressing. Btw, this is despite all their denials that they didn’t “partake” in any of the monkey business. Oh yeah….and this experienced investigative journalist has a bridge to sell.

EVEN so, aside from the personal discomfort and angst, the (communal) Jewish dirt dare not be swept under the rug. Never has been at this end. Never will be. Besides, don’t do the crime(s), and you won’t be exposed. Simple as that.

THAT out in the open, it is equally intrinsic to assert that this American-Israeli has a very clear-eyed focus, a healthy and well-earned admiration for the exceptional job done by many in the NYPD. In particular, the stellar work of former Police Commissioner Kelly and his counter-terror division bears special note. Few are aware of their herculean efforts to secure the city.

BE that as it may, it is time to connect the linkage of crooked dots, that which bind some within the NYPD’s top-tier to bribes, prostitutes, fraud, “deal-makers”, and assorted high-flying international and national players. This charge sheet includes “His Honor”, (Marxist) NYC Mayor DeBlasio!

OH where, oh where, to begin?

AT the beginning of the fall out, that’s where.

SO, let’s track-back to late 2013/early 2014, the approximate timeline when the FBI/FEDS hooked into a wave of corruption at the NYPD. More specifically, this ongoing – emphasis placed – probe involves:

HMM…what can go wrong with such a cast of high-charging, self-important players??

CONCOMITANTLY, a parallel investigation by the NYPD’s Internal Affairs Bureau, designed to “clean house”, ensued. Resultant, in April 2016, 4 top-ranking brass were summarily disciplined, while others of lesser rank became ensnared.

BUT let’s segue to the majorly connected culprits of interest, although a host of others are involved.

FIRSTLY, the following are the (main) bent top cops:

Gabi Grecko donned a skimpy flight attendant outfit to service now-disgraced NYPD Deputy Inspector James Grant, since-fired Detective Michael Milici and the others while flying over the American heartland in February 2013, she claims.

She was hired by a pair of businessmen to entertain Grant in exchange for official favors, according to a federal corruption case filed against him this week.

Grecko, 27, told The Post she performed oral sex on each man in the cabin — sometimes simultaneously having sex with more than one of them.

“I was doing it while they were in their seats,” Grecko recalled.

They all seemed really comfortable to take their pants off in front of each other and laugh about it. It’s like they’d done this before.”

Reichberg and Rechnitz arranged for Grecko “to come on the private jet and spend the weekend with the group in Las Vegas,” the Manhattan federal court complaint says.

As reported: Rechnitz also donated generously to de Blasio’s election campaign, and to the Campaign for One New York, a political nonprofit supporting the mayor, largely funded by contributions from real estate players. Rechnitz reportedly donated $50,000 to the group. He and Reichberg were both members of de Blasio’s inaugural committee in 2013. He also gave $102,000 to New York’s Democratic Party to fund its campaign to take control of the state Senate.

Rechnitz and Reichberg, of Borough Park, a diamond dealer, also funneled contributions from Manhattan jewelers Paul “Effy” Raps and Yaron Turgeman, who were subsequently accused of defrauding millions of dollars from Africa Israel founder Lev Leviev, according to the New York Post. Reichberg  was arrested in relation to the corruption scheme, in which the cops allegedly acted as a “private police force” for more than $100,000 worth of perks.

Reichberg, who faces charges of payment of bribes, gave the cops these gifts, Manhattan U.S. Attorney Preet Bharara has alleged. Harrington, 50, and Grant, 43, also face charges of receiving bribes, according to court papers. The prosecutor says they did the bidding of Reichberg and another major de Blasio donor, whom sources have identified as Jona Rechnitz.

MIND you, DeBlasio claims he can’t remember any quid pro quos….you scratch my back, I’ll scratch yours, a pay-for-play discussion with Rechnitz. Yup, he now has a case of amnesia!

WE are not done yet. Far from it.

THIRDLY, leave it to a crooked union boss – oh dear, a NYC correction officers head – to land squarely in the middle.

(Seabrook and the amnesiac Mayor)

As CBS2’s Hazel Sanchez reported, police said Seabrook, head of the Correction Officers’ Benevolent Association, was arrested without incident at his home in the Bronx. He appeared in U.S. District Court in Manhattan Wednesday afternoon…..

Speaking at a news conference on Wednesday, de Blasio distanced himself from Seabrook – a man he has publicly called his friend. He said Seabrook would be terminated from the force in the wake of the arrest.

“These are allegations,” de Blasio said. “But I’ll say this – if proven true, it’s disgusting and it’s very, very sad. It means he’s stolen money from his own workers.”

Authorities said the money exchange between Seabrook and Plantinum’s Huberfeldstopped after a 2014 federal investigation of de Blasio’s fundraising campaign lead investigators to subpoena the corrections officer and Platinum Partners…..

In 2013, FBI agents were alerted to a series of large transfers and deposits in multiple bank accounts held by a small wholesale liquor business in Harlem, the law enforcement officials said.

Ultimately, investigators concluded that a Harlem restaurant owner was using the accounts to run a $12 million Ponzi scheme, in which Rechnitz and Reichberg were investors.

Rechnitz and Reichberg have also been tied to a federal probe involving corruption within the NYPD.

So far, at least nine other police officials have been transferred or stripped of their guns and badges as internal affairs detectives and FBI agents examine whether officers accepted gifts and trips from businessmen in exchange for police escorts, special parking privileges and other favors.

A resident of Lawrence, New York, Huberfeld founded Centurion Credit Management in 2005. He was convicted of fraud in 1993 for having someone else take a broker license exam in his name. In 1998, he and his partner settled a civil complaintbrought by the Securities and Exchange Commission by giving up $4.6 million in profits and paying a $50,000 penalty.

ONCE a crook, always a crook. 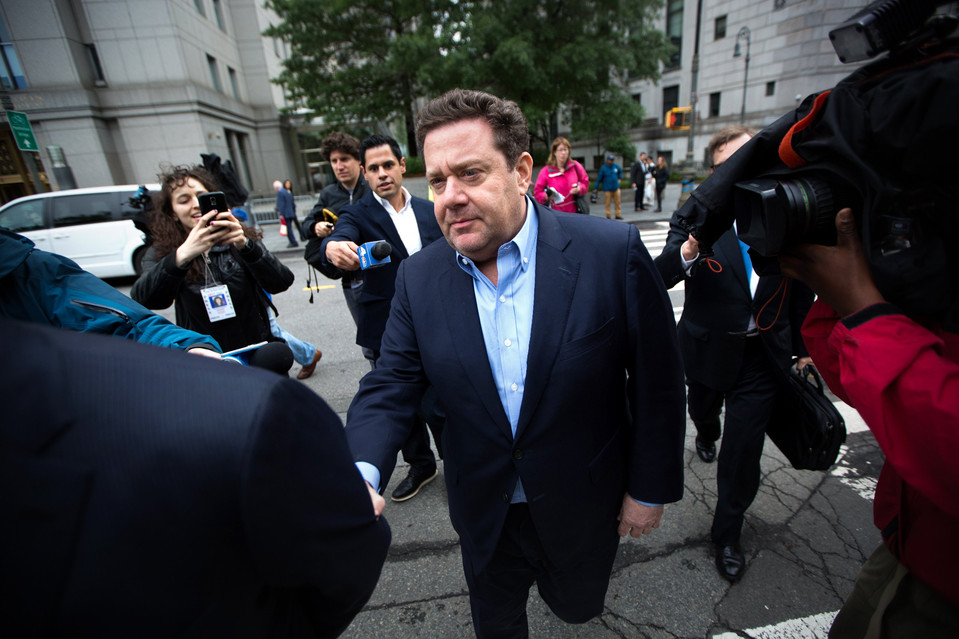 (Murray Huberfeld, seen outside federal court in New York on June 8, helped lead Platinum Partners, a hedge-fund firm that is now under investigation. Mr. Huberfeld was accused in an alleged bribery scheme.)

BUT we dare not exclude Moshe Feuer, Scott Taylor, and David Levy as culpable fraudsters, for they are part and parcel of said Platinum related indictment. No doubt.

NOW, in following the twists and turns of these sordid crimes and cast of characters, the experience within keeps wending back toward one direction. And not being one to rework the wheel, so to speak, another’s assessment (cited below) is precisely of like-mind.

Most interesting, perhaps is that the article, enhancing the curriculum vitae of Rechnitz, mentions his work:

We believe that Rechnitz’s position at Africa Israel is the key to everything that has happened since. If we had to speculate, we would posit that the diamonds both from Lev Leviev’s other endeavors and from those of Rechnitz and Reichberg, were used as leverage. The diamonds needed to be transported periodically, along with cash and other goods (perhaps including Peralta’s alcohol and in return they were used as untraceable payment, a quid pro quo for Rechnitz’s high-ranking friends.

AND while the full scope of the crooked twists and turns of the above players (with others in tow) has yet to be fully revealed, exposed – and may never be – suffice to state: there is a particular place in hell for those who not only betray the public trust, but who present themselves as dedicated to “law and order.”

STILL yet, adding to this site’s indictment, is the special outrage directed at Rechnitz, Reichberg and Huberfeld; three puffed-up blowhards, empty suits and souls, bereft of all integrity, but full of out-sized hubris.

NOT only did they bring shame and dishonor upon the heads of their respective families (that is, if their nearest and dearest are not the sort of folks who “circle the wagons”….hide the dirty laundry….play deaf, dumb and blind….when it comes to their familial miscreants and deviants), but to the Orthodox Jewish community at-large. Shameless and brazen, descriptors which barely scratch the surface.

TO wit, as the end of one Jewish New Year closes and a new one commences, the real judge, the G-d of Abraham, Isaac, and Jacob,

will eventually hold them to account. Never mind the righteous punishment they will (hopefully) receive from the criminal justice system.

LOCK THEM UP…but not in one of the ten cushiest pens for politically connected and protected criminals! 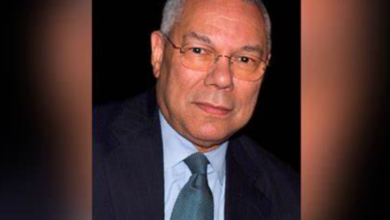