While so many Democrat allies belly up to the trough for ‘COVID’ payouts from the latest slush funds, New York shows us all who they really care about and who can go pound sand.

In typical situations, a ‘you break it, you bought it’ dynamic would mean the states enforcing shutdowns that are hurting or bankrupting otherwise profitable businesses should be on the hook for harm done to individual businesses that would otherwise have remained open.

Now states like New York have had billions of dollars shoveled their way with ‘covid’ as the alleged rationale behind it (which is far more than places like Florida, which has both a greater population, and more elderly population).

Did any of these states NEED a special COVID bailout? Probably not.

Cato Institute economist Chris Edwards noted that while there was a significant downturn in state revenue in the second quarter of 2020, overall it was balanced out by an uptick in the third quarter. “There is no need for more federal aid to the states,” he concluded.

So, the $350 billion in state “aid”—which cost roughly $2,442 per federal taxpayer—Congress just passed wasn’t actually necessary. What’s the driving motivation behind it, then? This becomes clearer when we consider which states are getting the most taxpayer cash. FEE

That article went on to demonstrate political favoritism. Similarly, we, and others on the right have been pointing out the giant hole in New York’s budget since BEFORE covid came to town. Notice the date circled on this headline: 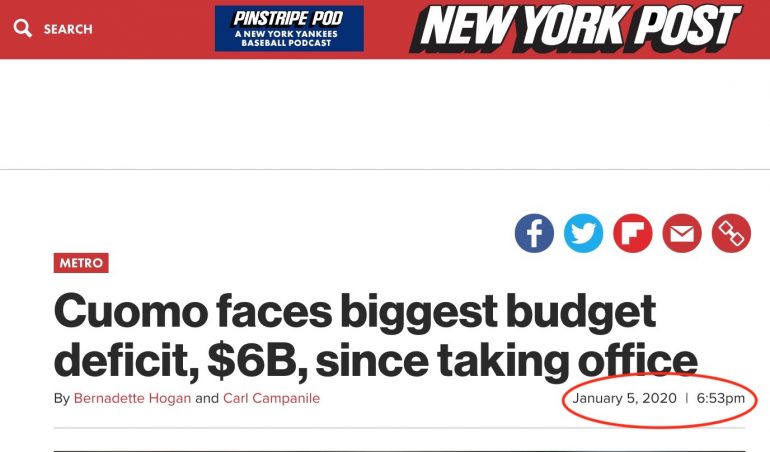 Dems (in New York, and elsewhere) want to suck up tax dollars from the rest of America to cover their own profligate spending. Profligate spending like money forked over to people who aren’t even in the country lawfully.

New York will be giving $15k handouts to illegal aliens in their state whose work has dried up due to the pandemic shutdowns.

That’s a pretty neat trick for a group that cannot lawfully work in America in the first place… and if the work is not legal, how exactly would one be paying taxes on their earnings?

How much could it cost a Sanctuary state like New York to cover that kind of a political promise? That’s a good question.

It’s one that deserves an answer. Why? Simple… like that line from the Joker in The Dark Knight, ‘…it wasn’t cheap. You oughta know. You bought it.’

PJMedia highlighted this issue, citing and reacting to the following quote from NYT.

When the coronavirus arrived in New York City a year ago, it hit enclaves of undocumented immigrants with a fury, killing thousands and wiping out the service and construction jobs that kept many families afloat…

But after a sweeping move by lawmakers this week, New York will now offer one-time payments of up to $15,600 to undocumented immigrants who lost work during the pandemic. The effort — a $2.1 billion fund in the state budget — is by far the biggest of its kind in the country and a sign of the state’s shift toward policies championed by progressive Democrats…

Republicans instantly criticized the measure as out of touch at a time when many other New Yorkers were still struggling, while some Democrats from swing districts upstate and on Long Island said privately that a publicly funded rescue program for people who are not in the country legally could be wielded as a cudgel against them in future elections. –PJMedia

But that’s only half the story. Like so much else in life, it requires some kind of a reference point before we can make sense of it.

An archeologist might put a penny next to something they’ve dug up so the mind can build a sense of scale, or a rocket bound for space might be shown in comparison to the hight of an average person, or the distance between the earth and the moon or sun as a contrast for measurements within the solar system and so on.

It would be helpful to have a sense of scale for how much these handouts cost the American taxpayer.

Breitbart has helped with the context:

Nearly 200,000 illegal aliens living in New York will soon receive $2.1 billion in taxpayer-funded stimulus checks and unemployment benefits thanks to a budget agreed upon by Gov. Andrew Cuomo (D).

While more than a million jobs have been lost in New York and an estimated 80,000 New York businesses may not make it to the end of the Chinese coronavirus pandemic, Cuomo and elected state Democrats agreed on a budget deal that provides billions to illegal aliens at the taxpayer’s expense.

Specifically, according to the New York Times, the state budget includes $2.1 billion in taxpayer-funded one-time payments in the form of stimulus checks and unemployment-style benefits for about 187,000 illegal aliens — about $1.1 billion more than small businesses are set to get in grants and tax credits after being forced to close by Cuomo’s economic lockdowns.

The budget also provides about $2.3 billion in federal funds for tenants who have been behind on rent as a result of Cuomo’s lockdowns, just $200,000,000 more than what illegal aliens will receive. —BREITBART

What’s the real kick in the teeth here?

The SALT deduction means that New York and other profligate states get to overcharge their taxpayers and have their citizens’ share of the federal bill shorted accordingly… meaning rich New Yorkers will literally pay less than their fair share at the Federal level because their money is being diverted to their home state, instead.

Literally, this becomes an exercise in taxation without representation.

How long will it be before Red States start entirely withholding federal taxes in protest to these systematic infringements on Federalism?