Voter suppression? North Dakota Democrats took out an ad that openly lied to voters: “if you vote in North Dakota you can lose your out of state hunting licenses.” Seriously, they’ll try anything at this point to suppress Republicans from voting. And there may even be people who are dumb enough to believe it. 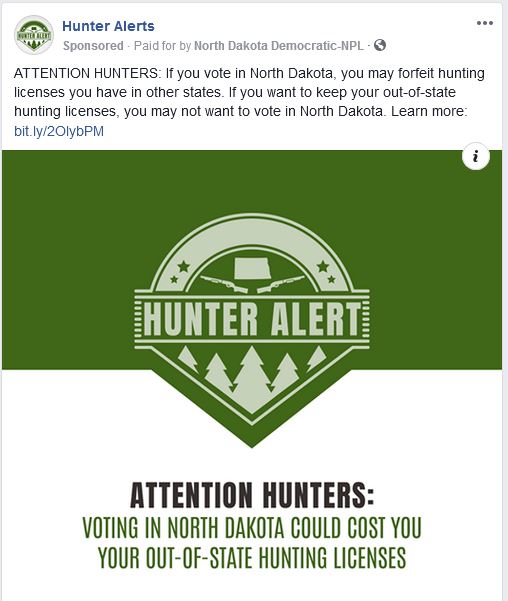 And this one at the North Dakota Democrat website:

“By voting in North Dakota, you could forfeit your hunting licenses.

If you want to keep your out-of-state hunting licenses, you may not want to vote in North Dakota’s 2018 election.”

So how did they twist this up? No one in the state government has ever heard of such a thing.

A spokesman for the North Dakota Game and Fish Department said it was not involved in the ad and didn’t back the message.

He said he wasn’t aware of any similar ads in the past.

Only the party that wants to take your guns could do something so untruthful to suppress the North Dakota vote.

This is false #ND don’t let these liar democrats get away with it. Figured I would call it out since the media is too busy fluffing the Dems to do their job. #NDSEN https://t.co/M9IyETe0ZX

A judge refused to issue and injunction over the North Dakota voter ID law after a North Dakota tribe challenged it, according to ABC. The ruling has caused Democrats to accuse Republicans of voter suppression. But at least this is in line with the North Dakota ID law, and not a made up lie out of thin air.

So we have outright lies like this, deceptions – hiding their true status as radicals, censorship of all things Conservative on Facebook/Twitter/Google/Instagram/ etc, they have pulled out every dirty trick in the book to win this election. Don’t fall for it. #VoteRed.