The proposed bill itself is about 430 pages and the summary about 82 pages and according to the Tax Foundation’s Taxes and Growth Model, the plan would boost GDP by 3.9 percent, raise wages by 3.1 percent, and add an additional 975,000 full-time equivalent jobs to the economy.

Furthermore, they found that the larger economy would generate nearly $1 trillion more in federal tax revenues, which would substantially reduce the estimated revenue loss, which they estimate to be $1.98 trillion using a current law baseline.

Jared Walczak of the Tax Foundation on Monday stated:

There are many ways to analyze the recently-released Tax Cuts and Jobs Act, but one of the most important considerations is its effect on Americans’ take-home pay. That issue could be approached in a number of ways, but since the bill’s impact on the tax burden of lower-middle income households is a subject of considerable interest across the ideological spectrum, it’s worth focusing on that today.

The bill more than doubles the standard deduction, which amounts to a large middle-class tax cut. At the same time, it eliminates the personal exemption, which reduces the benefit of that larger standard deduction, especially for larger families. Meanwhile, it expands the benefit of, and eligibility for, the child tax credit, creates a new temporary $300 per person family tax credit, and places more income in lower tax brackets. Clearly, there are provisions that cut both ways; the challenge is to put them into context.

Ten years out, the increase in after-tax income, on a static basis, would be significantly lower, at 0.7 and 0.5 percent respectively, since several important provisions are set to expire partway through the ten-year budget window, including the $300 family credit, while tax bracket indexing will have transitioned to chained CPI, a slower measure of growth. Expiring provisions on the business side, while not directly impacting individual tax liability, will also have effects on the broader economy that are important to taxpayers’ after-tax income growth. 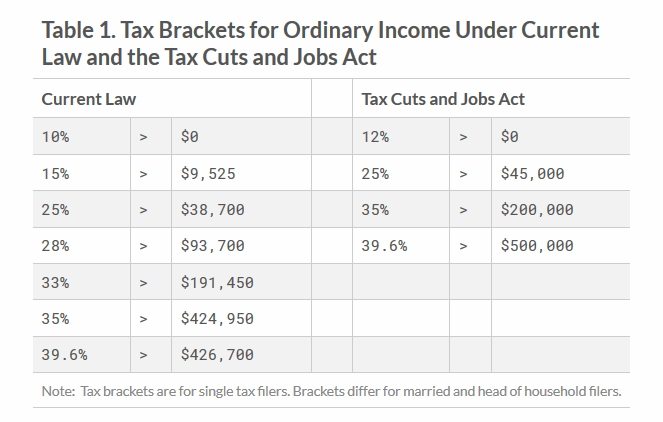 According to the Taxes and Growth model, long-run GDP growth will increase by 3.9 percent above what it would have done otherwise, wages will rise by 3.1 percent higher wages, and we’ll create 975,000 more full-time equivalent jobs. Those dynamic effects should increase after-tax income by 4.5 percent for those in the second-lowest quintile, and by 4.6 percent for those in the middle quintile.

The static figures, moreover, could be higher if Congress opted to extend the family tax credit and other provisions sunsetting at the end of the ten-year budget window.

Our assumptions differ from those of the Joint Committee on Taxation in at least one way that bears noting: our analysis accounts for the switch to chained CPI indexing for brackets, the standard deduction, and the refundable portion of the child tax credit, but not for the Earned Income Tax Credit (EITC) used by low-income families, a provision that was inserted after the initial draft of the bill was filed. This change will slow the growth in after-tax income for low-income families who claim the EITC.

Even bearing that in mind, however, our analysis demonstrates significant growth in static after-tax income during the years when all provisions are in effect, and substantial dynamic increases in later years even should Congress allow certain provisions to expire. If some of those provisions were extended, the benefit may prove even larger.

The Foundation further stated, “The Tax Cuts and Jobs Act represents a dramatic overhaul of the U.S. tax code. Our model results indicate that the Tax Cuts and Jobs Act would be pro-growth, boosting long-run GDP by 3.9 percent and increasing the domestic capital stock by 10.6 percent. Wages, long stagnant, would increase by 3.1 percent, while the reform would produce 975,000 new jobs. These economic effects would have a substantial impact on revenues as well, as indicated by the plan’s significantly lower revenue losses under dynamic scoring. On a static basis, the plan would reduce federal revenue by $1.98 trillion over the decade, with some of the revenue loss coming from one-time transitional costs.”

Details and Analysis of the 2017 Tax Cuts and Jobs Act can be read here.