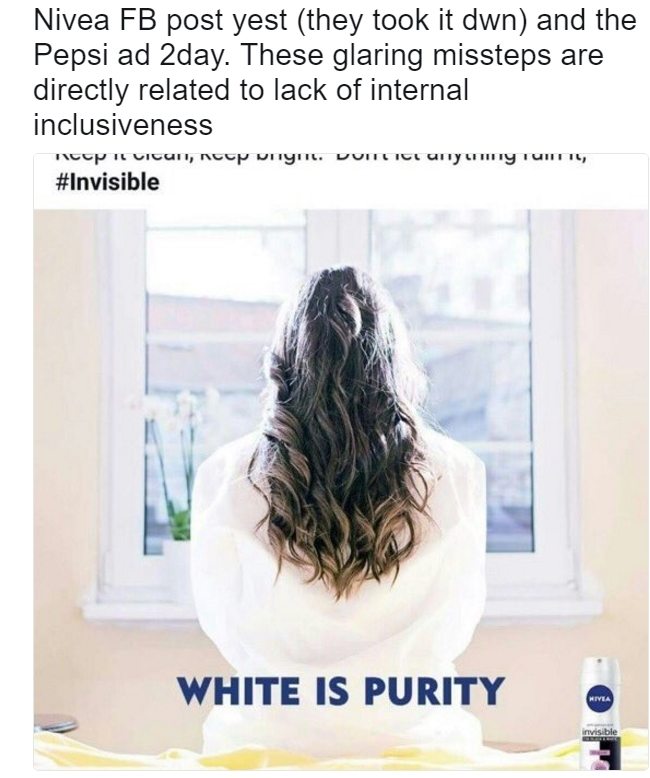 Political correctness has intentionally struck a well-known company when leftists cried foul after Nivea ran an ad, ‘White is Purity,’ and accused the company of racism, resulting in the ad being pulled.

The German body and skin care company ran the innocent ad for its Invisible for Black & White deodorant, which featured a photo of a woman draped in a white sheet with the slogan “White Is Purity” across the bottom of the image, and that is when the lefties went nuts.

Breitbart captured the story from the New York Times, which reported that the skin care brand set off a controversy this week with an ad featuring the phrase “White is purity,” again finding itself accused of racial insensitivity over a campaign that seemed to be embraced by white supremacists.

The latest ad, which showed a woman with dark hair cascading down her back and wearing white in a brightly lit room, promoted its Invisible for Black & White deodorant. Beiersdorf, the German company that owns Nivea and other brands like La Prairie, has since deleted the ad, which appeared with “Keep it clean, keep bright. Don’t let anything ruin it, #Invisible,” as part of its post.

“We are deeply sorry to anyone who may take offense to this specific post,” the company said in a statement. “Diversity and equal opportunity are crucial values of Nivea.”

Nivea’s decision to remove the ad on Tuesday, which was posted on its Facebook page for two days, and stop the entire campaign is another sign of how sensitive companies have become too negative reactions on social media.

Even after Nivea apologized on Tuesday, consumers were still dissatisfied. “It’s cool for the ‘Middle East’ Facebook page? Really? As if colourism isn’t a problem in those cultures?” Laila Parmoon posted on Facebook, where she identified herself as Iranian.

On Nivea’s Facebook page, one leftist stated, “Shame on you Nivea. I will be knocking all of your products off of the shelf whenever I visit a drug store. A public apology does not conceal the negative thoughts you people hold. Shame. Shame. Shame.”

One of the leftists who slammed Nivea, and said someone needs to be fired, had this on his Facebook page:

A supporter stated, “Why do people always take comments out of text? The ad about White Is Purity had absolutely nothing to do with white people. Have you ever heard that saying about being pure as snow? Anyone with the slightest amount of brains could understand that what was being talked about was the robe and not the person. Everything always has to be about race and when are people going to start complaining about teeth being pure white?”

A leftist responded by saying, “It happens to align with hate speech. Because of that, it can be adopted by hate groups whether Nivea meant to be hateful or not. Adding to the bad taste is that this is a German company and given Germany’s history with “pure” races one would think someone would have caught this in the embryonic stage..”

According to the leftists, if an ad or just the mention of the word, “White” is shown, it must be racist.

The color white, in the Bible and in today’s society, is typically associated with purity, things that are good, innocence, honesty, and cleanliness but according to the lefties, it means racism no matter what.