Operator of Prestige Limo, Nauman Hussain, has been taken into custody. Charges are pending. An update will be posted on https://t.co/SC465aKslr.

The AP wire published this via Long Island News 12:

The New York State Police say that the operator of a limousine company involved in a deadly crash has been arrested.

The arrest was announced in a brief press release Wednesday afternoon.

Let’s add that news from this morning to this news from two days ago:

The owner of the limousine that crashed was reportedly Shahed Hussain, according to Fox News. He was a Pakistani immigrant, once a paid informant for the FBI, and wore a wire for them in an effort to “root out” radical Muslims at mosques in Albany and Newburgh. Shahed was listed as the owner of Prestige Limousine.

Nauman Hussain is the son of Shahed Hussain.

At the trial for the people Hussain helped identify in a terror sting, the judge stated that Nussain’s testimony was suspect.

“However, during the trial Hussain’s truthfulness became a big issue.

In one instance, he testified about receiving substantial sums of money from a family trust in Pakistan during the pendency of the New York bankruptcy case.

He admitted under questioning that he had not disclosed the existence of the trust or the income he received to the Bankruptcy Court or his creditors.

The “Newburgh Four” were convicted and each was sentenced to 25 years in prison but New York federal court judge Colleen McMahon questioned Hussain’s honesty and the FBI’s tactics.”

It is unknown if the owner’s truthfulness will become an issue now as well.

The Limousine service had four vehicles taken out of the lineup after they failed inspections over the last 2 years. The vehicle involved in the Schoharie accident also failed an inspection just a month prior to the accident, according to New York Authorities. Plus, the driver, Scott Lisinicchia, didn’t have the proper license to drive it.

During the limo ride, one of the passengers texted her cousin to say that the limousine was in “terrible condition.”

New York State officials said that the owner of the limousine service had “no business” putting out vehicles that failed inspections to carry passengers. And since the driver (who was killed in the crash) didn’t even have the right drivers license…it appears  the owner of Prestige Limousine is in deep trouble.

Are States That Refuse to Reopen Losing the Consent of the...

Richard Manning - May 29, 2020
What happens to a government when the consent of the governed breaks down?  History has many instances of this some ending with peaceful transformation,...

Ann Coulter’s War: Trump is ‘a complete blithering idiot’ and ‘a...

This is the Problem: Good Cop Fired for Asking Fellow Cops to Respect the Rights of the People
May 27th, 2020 DC Clothesline 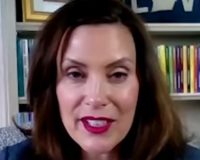