An article by Cassandra Fairbanks at the Gateway Pundit reveals what appears to be an illegal action by Nevada Democrats to promise items for voting for Biden. From raffling off gift cards to cookies with Biden stickers, free hamburgers, and other “incentives,” apparently someone didn’t pay attention to the law that giving things in exchange for votes is illegal in both State and Federal codes.

In a series of now-deleted social media posts, archives of which have been obtained by The Gateway Pundit, the Nevada Native Vote Project is seen clearly exchanging gift cards in exchange for people’s ballots.

The group cannot claim that they were providing gas to go vote, as they were exchanging ballots for the gift cards right there.

A lawsuit filed by Jesse Binall on behalf of the Trump campaign and Nevada electors states that “at least one of the social media videos in which NNVP promoted the voting drives and the incentives depicted NNVP personnel wearing a ‘Biden-Harris’ face covering and standing in front of a van bearing a ‘Biden-Harris’ logo and openly encouraged people to vote for Joseph Biden.”

These events were hosted and promoted by the Nevada Democratic Party.

In the following video, the Democrat spokesperson is standing in front of the polling place offering a raffle for gift cards, free t-shirts, swag and other items for voting.

The fact that the voting drives were officially promoted by NNVP organizing personnel displaying ‘Biden-Harris’ promotional material and logos reflects that value was being offered to voters under these circumstances in an effort to manipulate or alter the outcome of the Election.”

The Nevada Native Vote Project appears to have decided that they are untouchable for their actions. This was posted on Facebook November 1:

Election Day Event, Tuesday, Nov 3rd from 7:00am to 7:00 pm. Vote in person, register to vote or drop off you ballot!

Gas cards are available for those picking up voters! Get yourself a free #NativesVote t-shirt, a shaved ice from

Ping Pow Poom, and some delicious BBQ food from Susie’s BBQ.
CASH & PRIZE DRAWINGS will be held all day for those who show up and vote.

BBQ, t-shirts, cash, prizes like laptops, expensive speakers, iPads, and other “incentives”…the Democrats found something that worked. Illegal, but effective. It is interesting that some of these posts were deleted – it means that someone knew it wasn’t legal.

Critics have said that the lawsuit is “frivolous” and amounts to “fishing for votes.” Democrats deliberately targeted Nevada Native Americans with promises of items for voting. If you listen closely to the videos, you’ll find that the Democrat spokesperson was careful in her wording not to mention Biden/Harris in her spiel. But the fact of where she was standing,  in all instances gives the impression that’s exactly who she wants them to vote for. The tribal spokesman in one video clearly wanted them to vote for Biden, and was clearly against the Trump administration. (Note: not all Native Americans are Democrats)

Nevada’s Clark County has been the epicenter of complaints of voter fraud, with an evidentiary hearing in front of Judge James Russell set for December 3.  The Trump campaign can have up to 15 witnesses. Though this hearing will be about the Clark county voting machines, it is unclear when the allegations against the Democrat actions regarding the Neveada Native Vote Project will be presented. The Gateway Pundit is working on more clear evidence of manipulating the votes in Nevada. 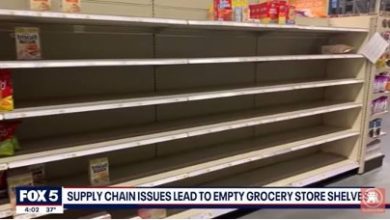 NYT writer: Walking white women racist for not getting out of his way on sidewalk