Schools and businesses across America have gone “woke,” adhering now to politically correct language and agendas no matter how extreme. Just look at the adoption of the race-based “Black Lives Matter” while at the same time the inclusive “All Lives Matter” is condemned as racist.

But now Americans should have a higher level of concern, since the government appears to be adopting the same political agenda as the extremists.

It is the National Archives that has slapped a “Harmful Language Alert: see NARA”s Statement on Potentially Harmful Language” on its archives catalog.

The Federalist reported the warning applies to all documents in the website, “including the Bill of Rights and the Declaration of Independence.”

And the threat suggests viewing those founding documents could be “harmful or difficult.”

“NARA’s records span the history of the United States, and it is our charge to preserve and make available these historical records,” the administration said in a statement obtained by the Federalist. “As a result, some of the materials presented here may reflect outdated, biased, offensive, and possibly violent views and opinions. In addition, some of the materials may relate to violent or graphic events and are preserved for their historical significance.”

The federal agency has the responsibility of preserving and protecting America’s heritage documentation, but now has created the alarm that those papers might “reflect racist, sexist, ableist, misogynistic/misogynoir, and xenophobic opinions and attitudes; be discriminatory towards or exclude diverse views on sexuality, gender, religion, and more,” the report said.

The NARA now wants to work with “diverse communities” to impose “sensitivity” on the documentation.

The report explained, “This isn’t the first time the National Archives has catered to a leftist view of history. In June, the National Archives’ racism task force claimed that the Archives’ rotunda, which houses founding documents, is an example of ‘structural racism.’ The task force also pushed to include trigger warnings around displays of the Declaration of Independence, the Constitution, and the Bill of Rights, which are all in the rotunda.”

A commentary at RedState expressed little sympathy for the politically dictated agenda being adopted.

“You ever wonder what part of ‘We the People, or Life, Liberty, and the Pursuit of Happiness’ is so harmful, offensive, xenophobic, or worse — my fellow ‘white supremacist,’ ‘systemically racist,’ ‘insurrectionist’ friends? Me, neither. Other than what our leftist friends tell us, 24×7, that is. Oh, well.”

It continued, “The Founding Documents of the United States of America are now subject to a nameless, faceless, federal government bureaucracy that not only believes it has the constitutional right to determine — working with staff, communities, and peer institutions (likeminded bots) — to decide what constitutes offensive, outdated, biased, offensive, and possibly violent views and opinions — and as a result, to establish standards and policies to prevent future harmful languages, but also that is qualified to do so.”

And, “The Left is not stupid. It is insidious and it cannot be reasoned with. Left-wingers are impervious to facts, data, history, logic, and common sense. They might sometimes pretend to understand, agree, or compromise on any one or more of those factors, but they generally lie their a—- off while doing so (see: Joe Biden), including, sometimes, lying to themselves.” 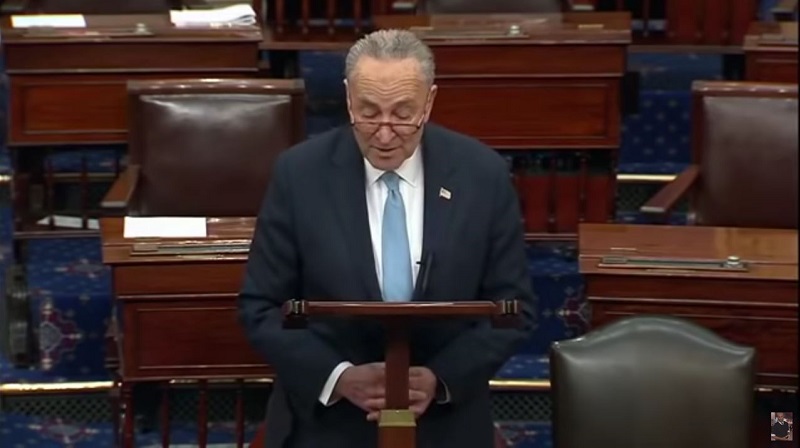 Trump Sends Schumer Smack-Down Letter: ‘I Never Knew How Bad A Senator You Are’